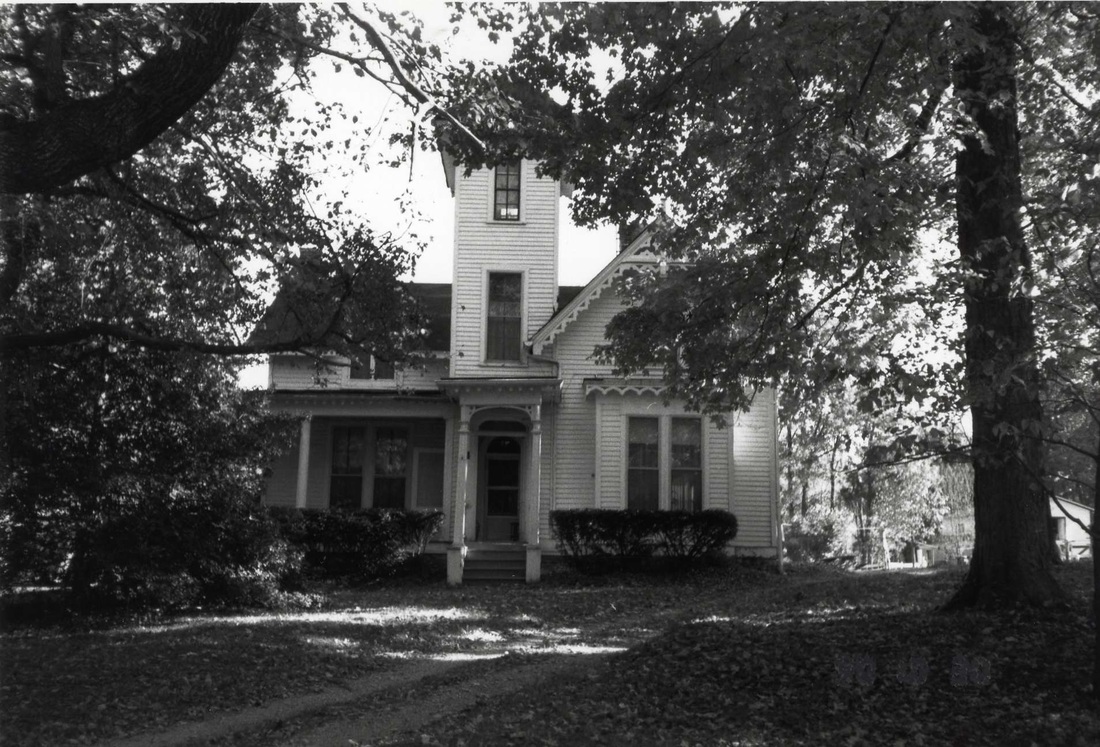 Photo from "Historic Pewee Valley," published in 1991 by Historic Pewee Valley, Inc.
Annie Fellows Johnston fans know that it was on Tanglewood’s grounds that Little Colonel Lloyd Sherman received two proposals: one at Christmas time from Malcolm McIntyre in “The Little Colonel at Boarding-School” and the second, which she eventually accepted, from Rob Moore in “The Little Colonel’s Knight Comes Riding.” However, the history of Tanglewood began long before Annie Fellows Johnston put pen to paper and the present home on the site was built.
​
Early Origins: The Southers 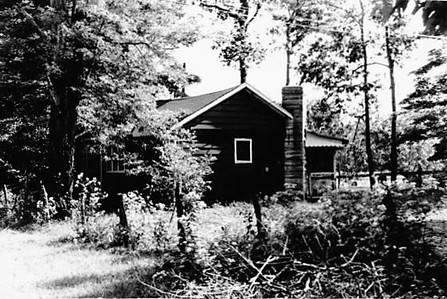 Guest house photo from the National Register of Historic Places nomination, 1989
​Research conducted in 2005 by University of Kentucky archaeologist Jay Stottman traces the estate’s name to the early 1820s when the land was owned by the Souther family, who came to Kentucky from Culpepper, Virginia. The following genealogical information on the Southers was supplied by Richard Dennis Souther of the Souther Family Association in Honolulu, Hawaii:

No trace is left of Henry and Anna Souther’s home on Tanglewood’s property. When the current owners rerouted the driveway, they uncovered many shards of white china decorated with tiny blue flowers. The shards were located near the site of a small cabin that had belonged to an African American family (Robert and Arlene Carr were living there in the late 1940s, according to Louise Herdt "Sis" Marker) and was still standing when the Gleasons bought Tanglewood in 1951. Whether the china and cabin were remnants from the Souther era is unknown.
2006 Photos of Tanglewood by Donna Russell 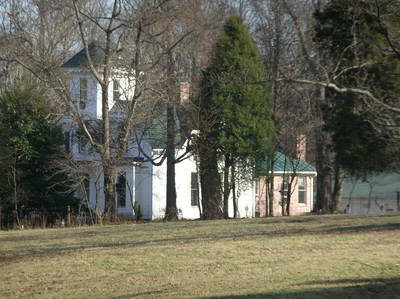 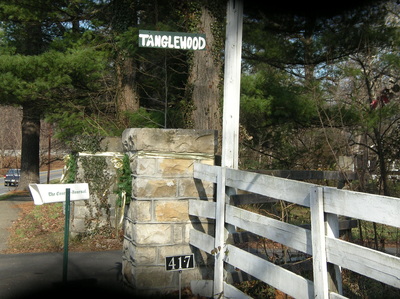 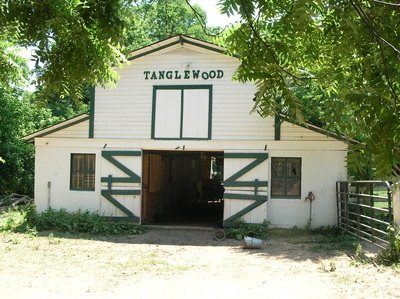 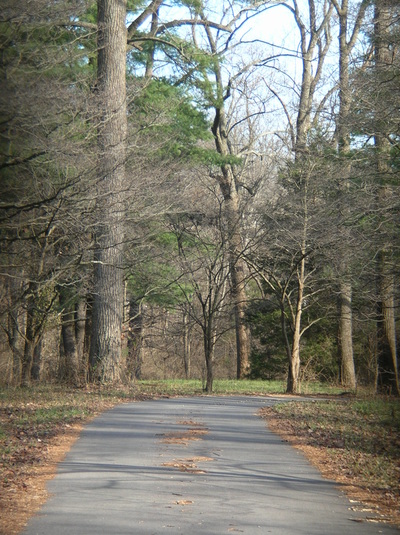 The Post-War Building Boom and Pewee Valley Building Association
​After the Louisville & Frankfort Railroad commuter line was established in 1854, Pewee Valley became a choice locale for both summer homes and year-round dwellings. The advertisement below for a building site in Pewee Valley, from the July 2, 1862 edition of the Louisville Democrat, cites the property’s proximity to the railroad station:

THE UNDERSIGNED HAS A BEAUTIFUL tract of 24 ½ acres, eight cleared and in a high state of cultivation, on which a fine young orchard has been planted, embracing a variety of fruit. It is near Pewee Station, and has a fine site for buildings. Those who desire to procure a fine healthy location, in an excellent neighborhood, and within city reach, will find this worthy of their attention. Will be sold at a bargain for cash.

While the Civil War interrupted real estate speculation for a time, it began again shortly after the war. The home known as Tanglewood today, in fact, was part of the building boom the city experienced after the war. According to the Statement of Significance submitted by Historic Pewee Valley to the National Register of Historic Places:

Tanglewood is a rare example of a nineteenth century house whose building date and specification are well documented in a newspaper advertisement for the sale of the house. On July 30, 1869, in Louisville’s “Courier-Journal,” appears the following ad:

For Sale – in Pewee Valley – “Hillside Cottage” and 10 acres ground – lies immediately on the Railroad adjoining St. James Episcopal Church and within a 5 minutes walk of the depot. The house is being built and will be ready for occupancy August 10, is Swiss in style and contains 10 rooms, has all requisite closets with storerooms and cellar. Must be seen to be appreciated. Will take good low-priced unimproved city property in part payment. Apply on the premises to John F. Dickson, Trustee.

The ad …establishes that the house was built on speculation. A deed search indicates that the property was purchased in February, 1869 by Louisa Dickson, wife of John F. Dickson, and in April was sold to Jonas H. Rhorer and Charles B. Cotton, two Pewee Valley residents who were involved in a great number of local land transactions during the late 1860s and 1870s…

Charles Buck Cotton (September 17, 1826-May 11, 1894) was born in Woodford County, Kentucky and graduated from Centre College in 1849. He studied law in Lexington and moved to Louisville to practice. On December 20, 1855, he married Jennie M. Gallagher, daughter of the poet William D. Gallagher of Undulata/Fern Rock Cottage. In 1861, he served a year as Louisville’s Surveyor of Customs (a post his former neighbor, Walter Newman Haldeman, left rather suddenly when Kentucky joined the Union side of the Civil War). His Pewee valley property is shown on the 1889 Horace F. Smith subdivision map. It later became the site of the Villa Ridge Inn and Kentucky Confederate Home.   Rhorer’s name was attached to seven Pewee Valley houses between the 1860s and 1870s and he was also partial owner of other properties through a “Building Association,” incorporated by the State Legislature in 1868, which was constructing houses – such as Tanglewood – on speculation:

CHAPTER 1151.
AN ACT to incorporate the Pewee Valley Building Association.
Be it enacted by the General Assembly of the Commonwealth of Kentucky:
§ 1. That there is hereby enacted in the county of Oldham, by the name of the "Pewee Valley Building Association," a body corporate and politic, the members of which, their successors and assigns, shall have perpetual succession; and by that name said corporation may sue and be sued, contract and be contracted with, may purchase, and take by gilt, and sell such real and personal property as may be necessary to carry out its legitimate purposes and the object of its creation. The objects of said corporation are, and its general business shall be, to promote the settling up of Pewee Valley, by buying lots and building houses thereon for sale to such persons as may wish to settle in the neighborhood.

§ 2. Every person subscribing and paying into the treasury of the association two hundred dollars shall be a member of the corporation, and shall have a vote on all questions coming up at its meetings.

§ 3. It being the object of the association not to make money. but to build up the neighborhood, so as to strengthen it for the maintenance of schools, churches, &c, the subscribers shall have no right to withdraw their subscriptions nor to receive interest or dividends thereon, but said subscriptions shall be regarded as donations to the object of the association. When the association shall have purchased, improved, and sold all the vacant lots they may deem it desirable so to purchase, improve, and sell, the amount which may remain in the treasury shall be expended in the improvement and embellishment of the roads and avenues of the neighborhood, in the building of a public school-house or school-houses, a public park, the association having the right to decide as to which of these improvements they will carry out, or whether to expend what may be in the treasury in some other matter of public improvement, for the benefit of the residents of the neighborhood. The association may appoint such officers and agents as may be necessary for the conducting of its business; and may pass such b)-laws, rules and regulations, as may be deemed necessary for its government, not inconsistent with the constitution! of this State or of the United States. J. H. Rhorer, Harry Mith (editor's note: probably Henry Smith), and J. F. Gamble, are hereby appointed commissioners, who shall open books and receive subscriptions of stock to said association; and when so much as two thousand dollars of subscriptions are made, the said association shall he organized and go into operation; anJ after its organization, said association may receive additional subscriptions, and they may have a capital not exceeding one hundred thousand dollars.
Approved March 9, 1868.

Both Rhorer and Cotton also supported efforts to improve Pewee Valley. Cotton was appointed one of the town’s original trustees in the 1870 state charter, as was Rhorer’s brother, Milton. Rhorer was one of six men who paid to build the train depot and also lent his support to the establishment of the Pewee Valley Cemetery. Both were involved in founding the Pewee Valley Presbyterian Church and it was Cotton and his wife, Jennie, who donated the property on which the church stands. It was Cotton who served as the trustee for the African Baptist Church and school, now known as the First Baptist Church, in what was then Stumptown, a black settlement off Floydsburg Road established a few years after the Civil War’s end. And it was Cotton’s property that was eventually sold to Horace F. Smith and the Pewee Valley Hotel Company. That company built the Villa Ridge Inn, which later became the Kentucky Confederate Home.

Unfortunately, much of the money that supported their ventures appears to have come from ill-gotten gains. Rhorer was caught with his hand in the till at the Savings Bank of Louisville on January 9, 1880, and his Pewee Valley real estate empire collapsed like a house of cards. Whether Cotton was aware of the embezzlement is unknown, but the scandal had an impact on some of Louisville’s leading families, including the Speeds, who were later sued, because they were on the bank’s board of directors and were unaware of Rhorer’s criminal activities until he confessed to the crime.

Tanglewood was one of the properties that was liquidated following Rhorer's conviction and subsequent bankruptcy. The house had previously been owned or rented by a Mr. Staltz, according to a December 25, 1871 story in the Courier-Journal, called "Country Seats. A Pen Picture of Pewee Valley." The article listed and described the town's homes and their owners' names:

On this bright, frosty morning from the platform (of the depot), let us take a coup d'oeil of the handsome residences -- on the left, just entering the town is "Delacoosha," with its turret and pinnacles, home of James A. Miller, Esq. Joining it is the cozy cottage of Luther Howard, Esq., modest and unpretending, nestling quietly in a grove of ancient beech-trees; next the buff-colored villa wherein dwell the Knight Templar Pastor of Pewee and his lovely North Carolina wife. A little beyond is the imposing mansion of C.B. Cotton, Esq., with its conspicuous and well-filled conservatories; in the rear "Hillside Cottage" -- home of the poet laureate of Pewee. Dimly through the trees we discover the stately Oak Lea, home of Judge Muir, the gifted and distinguished member of the Louisville bar; nearer the road surrounded by evergreen trees is the tasteful Mantuan villa, built by the late O.P. Truman, whose family still lives there. There is the picturesque mansion of Jonas Rhorer at the end of that long avenue of lindens; on the opposite side of the road is Captain Lockhart's cottage, cheery and hospitable; in the distance the Swiss chalet of Mr. Staltz; a little nearer, the French chateau of Mr. Stump; the tasteful and complete house of the young British physician, Dr. Peebles, lies farther beyond St. James' church. Then the picturesque Italian villa of Milton Rhorer, and the romantic Willow Glen, where lived the lamented Crawford, ex-Mayor of your city, whose tragic death you remember. A quarter-mile from the road in bold relief, on a slight elevation, is "Valhalla," built in the style of English country seats, utility and ornament combined; this is the rural retreat of that great friend of man-kind, J.M. Armstrong, of Tower Palace...

The 1879 Beers and Lanagan Atlas shows that Tanglewood was owned by Jonas Rhorer. However, by the 1880 census, Jonas Rhorer's daughter, Louisa; her husband, Thomas P. Barclay; and his six  grandchildren, Jonas, 15; Samuel, 13; McKee, 10; Julia, 7; Thomas, 5; and Louise, 2, were living there. During recent renovations, the signatures of Jonas, Sam and McKee Barclay, dated May 18, 1879, were uncovered beneath layers of wallpaper on Tanglewood's plaster walls.
​ 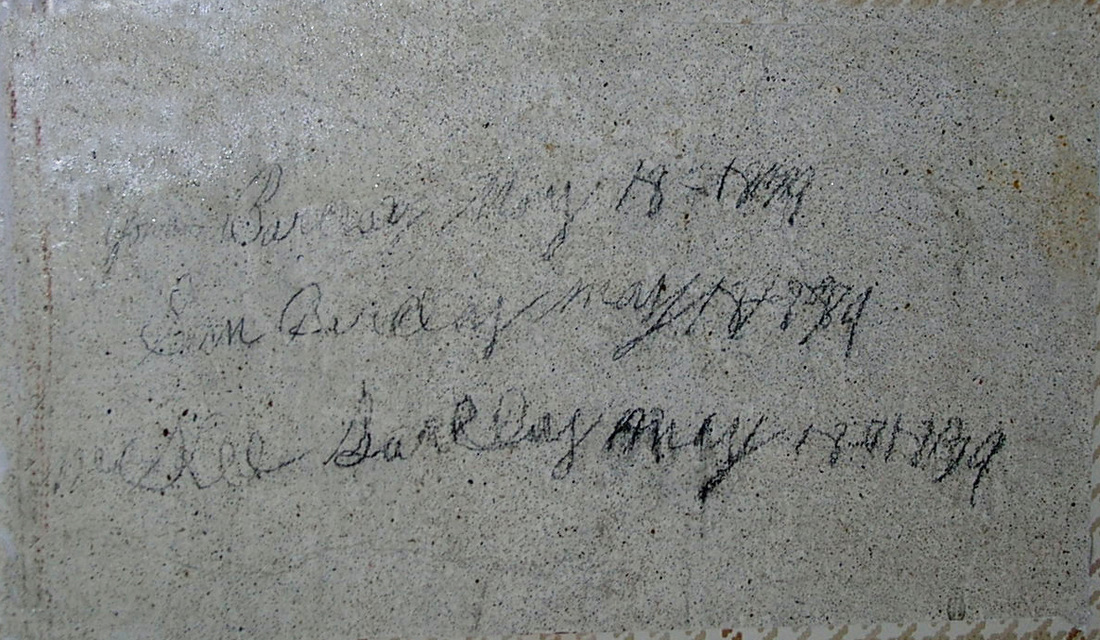