Welcome to the history of
​Pewee Valley, Kentucky

Most of the time, residents are referred to as “Pewees” – not exactly a label the male of the species – other than the occasional major league baseball player or  fictional comedic character  -- would prefer to be known by.

Recently, I heard a new epithet from Pewee Valley Police Chief Greg Larimore. He referred to the residents as “Pe-wee-ans.” To my ear, Peweeans sounds more like a Native American tribe or Appalachian clan than a batch of commuters from the ‘burbs. However, after doing some historical research, it turns out Chief Larimore is correct. According to a spoof on the area’s history, Antiquates Peeweeji: A Discourse on the Antiquities of Pewee, written on July 4, 1858, when the budding town was known as Smith’s Station, some citizens were already referring to themselves as Peweeans.

Which brings me to my point. Pewee Valley is such an odd moniker. Not that there aren’t other strangely-named towns in the Commonwealth of Kentucky: Rooster Run, Rabbit Hash, Monkey’s Eyebrow, Possum Trot, Big Bone Lick, Bugtussle, Whoopee Hill, 88 and Black Gnat, to mention a few. The Bluegrass State seems to have more than its fair share. Maybe it’s because we were once the hemp capital of the United States. Or perhaps it’s a consequence of the state’s long-time love affair with bourbon. But I digress. The point of this narrative, like one of Rudyard Kipling’s “Just So Stories,” is to tell the tale of How Pewee Valley Got Its Name.
​
The Legend
There’s a legend associated with Pewee Valley’s unusual name. In it, both the Eastern Wood-Pewee bird and an early resident, 19th century educator and grammarian Noble Butler (1819-1882), figure prominently. A reference to how Pewee Valley got its name is noted in a biographical sketch of William D. Gallagher, a neighbor, which appeared in Ohio History, Volume 2 (Ohio Archeological and Historical Publications, 1893):

Pewee Valley (at first named Pewee's Nest by Noble Butler, from the circumstance that when locating a building site there he wrote letters in a ruined cabin in which the pewees had built) is a beautiful village, on the Louisville & Nashville Railroad, about sixteen miles east of Louisville. It became a chosen resort of people of culture and taste.

A similar tale is told in Antiquates Peeweeji, but in much more romantic style. The story describes the Eastern Wood-Pewee as a mystical bird, which celebrated the Biblical dawn of creation with her song, “Pe-wee, Pe-wee…Peace and good will, peace and good will...”, but disappeared when Adam and Eve tasted the forbidden fruit. The bird did not reappear until Noble Butler arrived in the paradise now known as Pewee Valley:

…When these pioneer settlers and their families and dependants (sic), had gathered themselves together, and erected those beautiful palaces which are the wonder of every passing traveler; and had learned the legend with which this veritable history commences, they began to see that, segregated as they were from a barbarous world, they must make a government of their own, by which those who succeeded them might learn to be fitted for intercourse with the world outside. Pending the discussion of this weighty matter, there came another settler to these shores. This was a scholar,
…“a bookman wise as three
Darker a scholar you shall not see
In Jewrie, Rome or Araby.”
​
Modest of mien, but mighty in mind, he placed his penates in an humble cottage, little dreaming the destiny fate had in store for him. To him had been committed, in the outside world, the charge of the barbarian youth (editor’s note: in 1839, Bulter became professor of Greek and Latin at the University of Louisville). His was the task to “rear tender thought, to teach the young idea how to shoot”… his fancy wandered to the Arcadia of which he had heard from its pioneer settlers. Hither came he then, and in the little cottage sat him down to rest from toil. Foremost of all was he, this Professor, in framing the new government….

While sitting one day, like Tytoerus, “beneath the shady shadow of an umbrageous beech” contemplating the rules of all past governmental economy, as applicable to his new home, his ear was suddenly arrested with the magic sounds, “Pe-wee”, “Pe-wee”. At first he distrusted his hearing. Could it be the magic bird again had visited the earth? Was the promised paradise indeed renewed? Was “Peace and Good Will, Peace and Good Will,” again to dwell in those shades where first it had been proclaimed? As thus, gazing upward, he enquired, the bird flew down and perched above his head, trilled forth the song of old, “Pe-wee, peace and good will; Pe-wee, peace and good will.”

…Then ran from house to house, and assembling his friends, he narrated his vision. The pioneers knew full well the meaning of this miracle, and with one accord, they bowed the knee before the Professor, and hailed him “KING OF PEWEE”, when all the woods around became suddenly vocal with the song-bird’s note….
According to the story, those “pioneer settlers” Noble Butler assembled to hear his vision for Smith’s Station’s new name included:

A third account of how Pewee Valley got its name was penned by Catherine Anne Warfield as a narrative poem and first appeared in print in May, 1873. In her version, the settlers convened a council and it resulted in deadlock -- not unexpected, with so many talented wordsmiths assembled in one room! The deadlock was broken by a Pewee bird’s song and “the dark browed student” –Noble Butler – suggested that Pewee be the name of the “valley fair”:
Which version of the events lies closest to reality, 21st century Peweeans may never know. The truth is shrouded by poetic license and the mists of time. However, one fact is clear. It’s Noble Butler who deserves to wear the mantle of fame – or blame, pending on your point-of-view!

In this Ode to Pewee, published in the July 5, 1858 edition of the Louisville Daily Courier, Butler, writing under the pseudonym A. Muttynge Hedde, admits the name was a joke:
*cattle **tuberculosis ***British writer, historian, politician and poet (1800-1859), who wrote several famous ballads, including Horatius
​**** The town of Rollington was incorporated and settled long before Pewee Valley, although it is now a part of the city. As stated in the poem, it did, indeed, have a public inn and a church 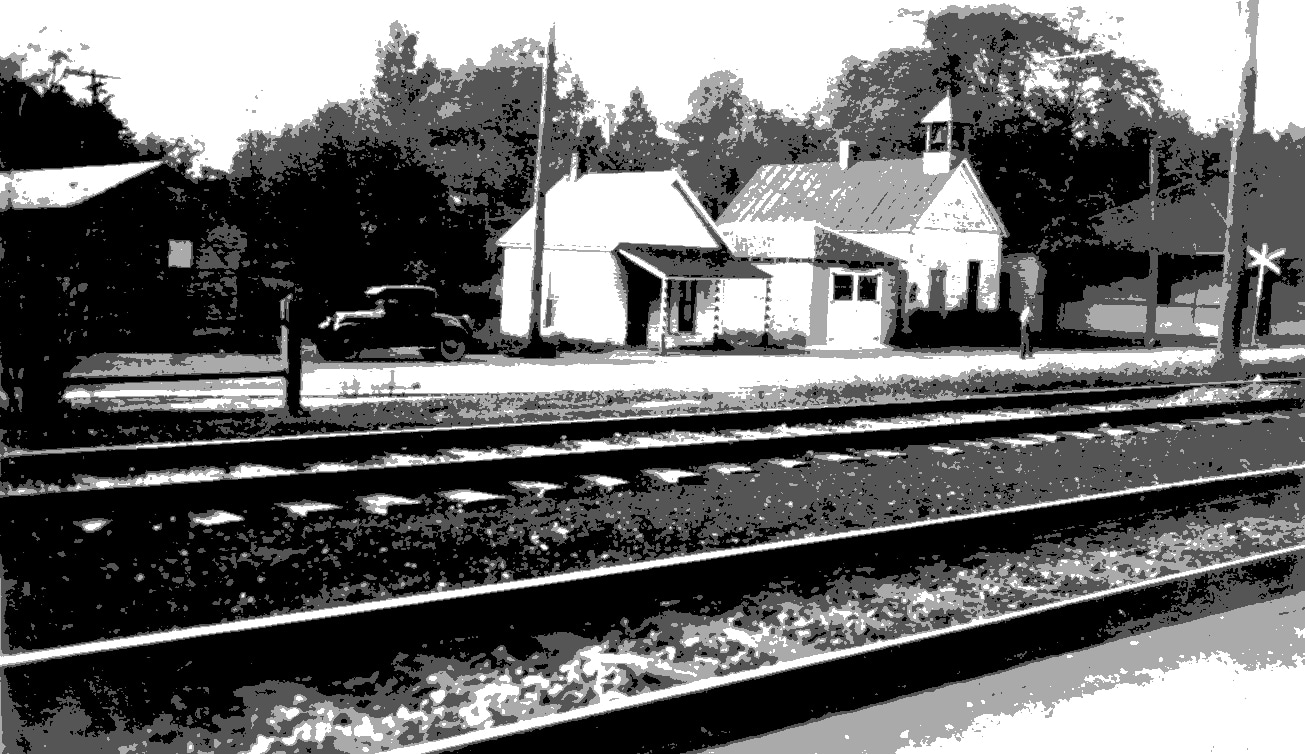 The town, however, was stuck with it. On December 30, 1871 -- the year after the City of Pewee Valley was incorporated -- the Courier-Journal ran a story called "Country Seats. A Pen Picture of Pewee Valley," which lamented the village's "humiliating" name:

We seldom see anything about "Pewee" in your paper. Why is it? Have you forgotten us? Perhaps some of your readers do not know what a delightful, what a charming place Pewee Valley is; even one may exist who does not know where it is. This beautiful village lies on the edge of Oldham County, sixteen miles from the "Falls City," and, despite its name, is situated on a ridge which separates the waters of La Belle Riviere from those of the mighty and majestic Salt River. The cognomen is no longer appropriate to the flourishing and wide-spread town stretching out before the traveler whizzing by; but as it was given by a resident -- a poet and a scholar -- in honor of the little bird of the same name -- neither a beauty or a sweet songster, but fond and familiar, coming through the house, assured of a welcome though the proverbial hospitality of the inmates -- the town still bears the name, though humiliating ...

​The objections of Pewees were reported in The Louisville Times, and Postmaster Matthews Fletcher wrote the state highway commissioner a letter of protest. The commissioner promised to correct the error -- and, sure enough, the extra "e" magically disappeared...

Adding insult to injury the Kentucky Transportation Cabinet made THE SAME ERROR in 2003, when they replaced the signage along I-71 between Louisville and I-75. Pewee Valley became Peewee Valley until the signs were once again corrected.