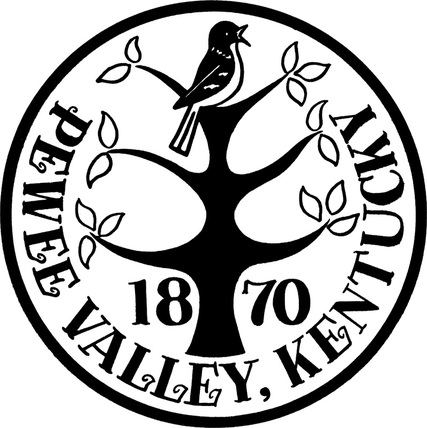 Look familiar? The City of Pewee Valley's official emblem was actually designed for a Centennial competition in 1969. 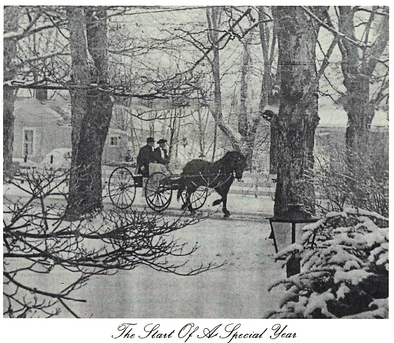 ​In 1970, the City of Pewee Valley threw itself a year-long birthday bash to mark the town's centennial. The celebration started January 1st by ringing in the New Year 1870-style, the January 1970 Call of Pewee reported:

It was a sight to behold the afternoon of Jan. 1: Pewee Bob Wright in his ancient buggy hauling bell-ringing Mayor-elect John Frith Stewart along the snowy streets of Pewee Valley for a cold, 2-1/2 hours, preceded by Police Chief J.B. Logsdan with car lights flashing and followed by assorted other cars and horseback riders with volunteer policeman Jack Riley bringing up the rear -- all for the purpose of ringing in our centennial year.

The January Call also announced a "Little Colonel of 1970" contest for girls ages 6-8 who lived within the city limits. The winner would appear, dressed in costume, at Centennial events throughout the year. 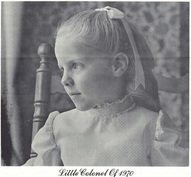 The contest was judged on WAVE-TV 3's "Morning Show" featuring Ryan Halloran and Julie Shaw at 9:00 a.m. on February 27. ​Six-year-old Maria Darst was the winner. She was featured on the front cover of the March 1970 Call in a photo taken by Peweean and professional photographer Richard Duncan.
The contest  was the first  scheduled event of the official Centennial Celebration Programme.
Centennial Celebration Programme for 1970 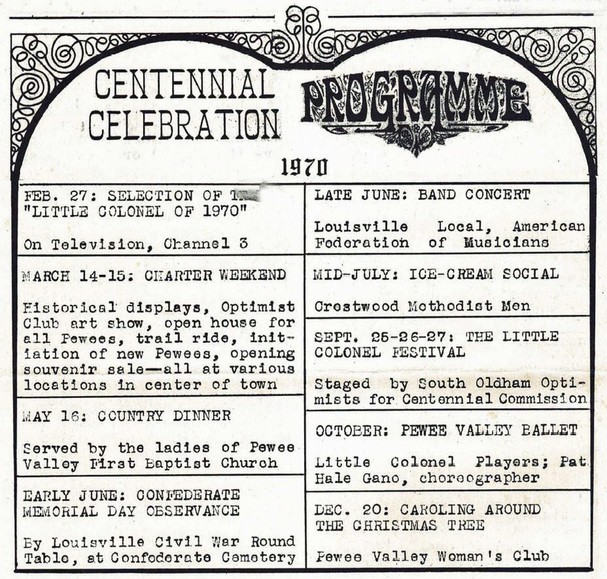 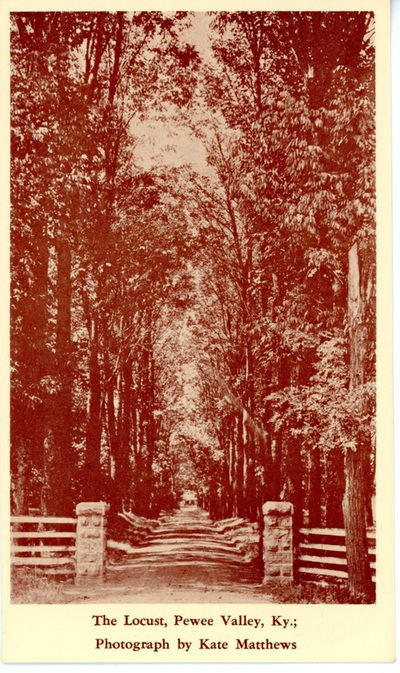 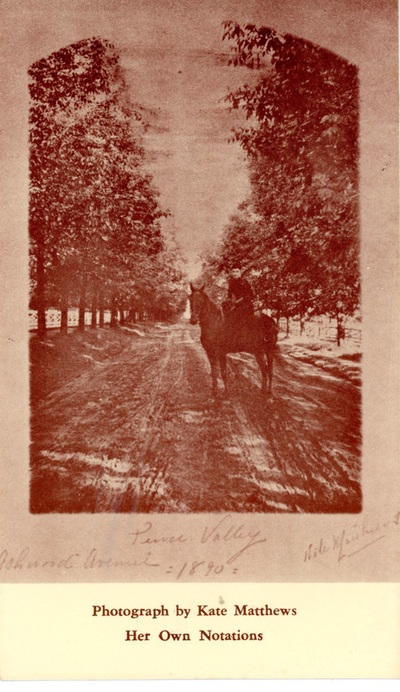 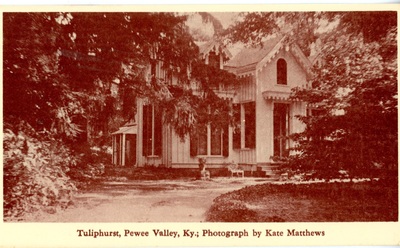 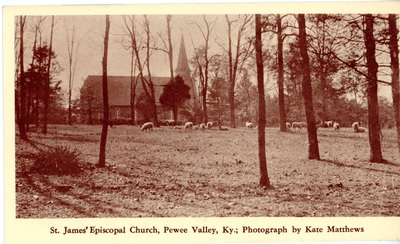 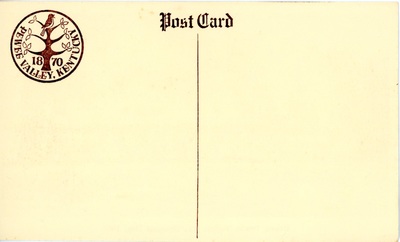 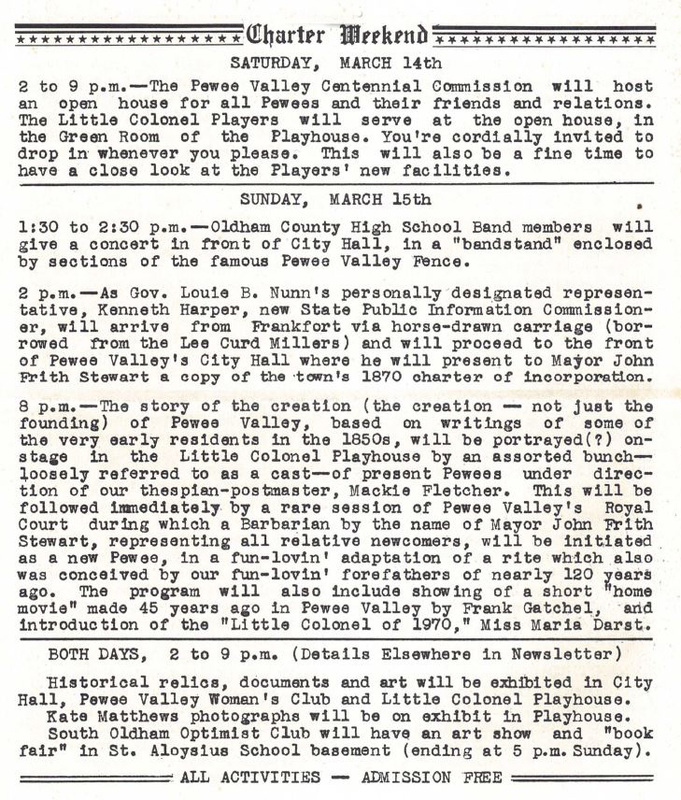 From the March 1970 Call of the Pewee
For the charter presentation, five lengths of Pewee Valley fence were  erected in the center of town to serve as a stand for dignitaries and the Oldham County High School Band.
Presentation of a Copy of the 1870 Charter by State Official Kenneth Harper During Charter Weekend 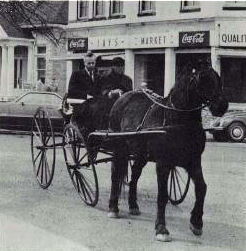 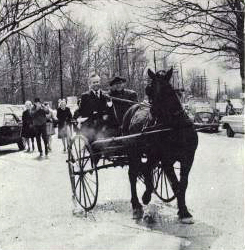 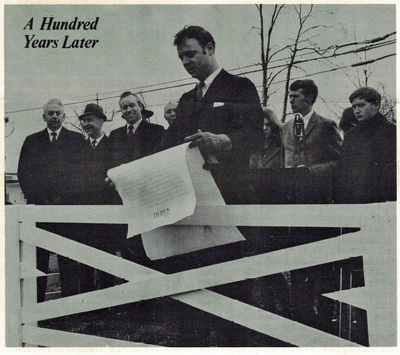 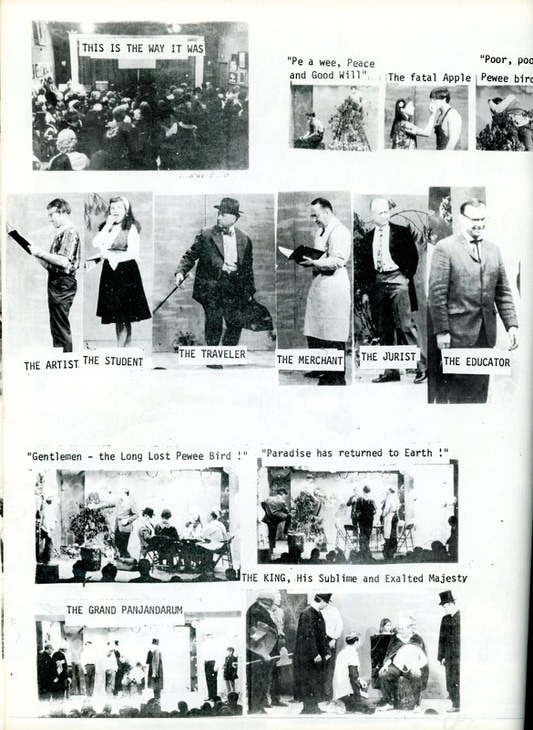 ​The "Poor, poor Pewee bird" was played by Robert E. Duncan, who years later wrote a letter to the editor of the Courier-Journal recounting his fond memories of the pageant and Pewee Valley's volunteer fire department:

A great place
To the editor:
Having grown up in Pewee Valley, I was pleasantly surprised to see an article concerning the Pewee Valley Fire Department and Bill Herdt on The Kentucky Fire Wire, an Internet page. I can still remember hearing the siren blaring at our home on Dogwood Lane and listening for the volunteers from across the town rushing to the fire station. I can remember the men washing the trucks and training every week while I was participating with activities at the Little Colonel Playhouse...

...It's been nearly 30 years since I left that little "Garden of Eden," as Mackey Fletcher called it in the City's Centennial Celebration so many years ago -- I was the Pewee Bird sitting on top of the ladder in the pageant ... But I still look at Pewee Valley as home, as changed as it is...
Robert E. Duncan
Stamping Ground
Confederate Memorial Day Observance June 3 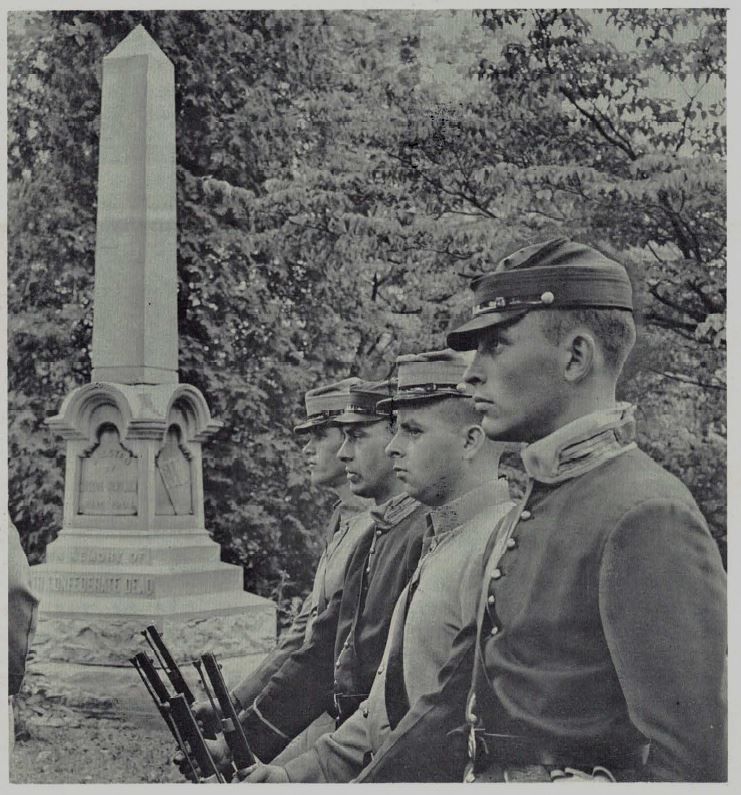 This photo, taken by Courier-Journal and Louisville Times photographer Bill Strode on June 3, 1963, shows the Blue and Gray Squad of the Ft. Knox Armory Center at a Confederate Memorial Day Observance. Strode owned a lot in Clovercroft subdivision at one time. From the May 1970 Call of the Pewee.

And at 8:30, Peweeans got a sneak peek at a 35-minute film, "Jefferson Davis -- A Profile," and a chance to meet the producer, historian A.P. Andrews, inside the playhouse. The Commonwealth of Kentucky purchased the educational video for showing at the Jefferson Davis Birthplace memorial at Fairview, Ky., near Hopkinsville. ​​
The Little Colonel Festival September 25-27 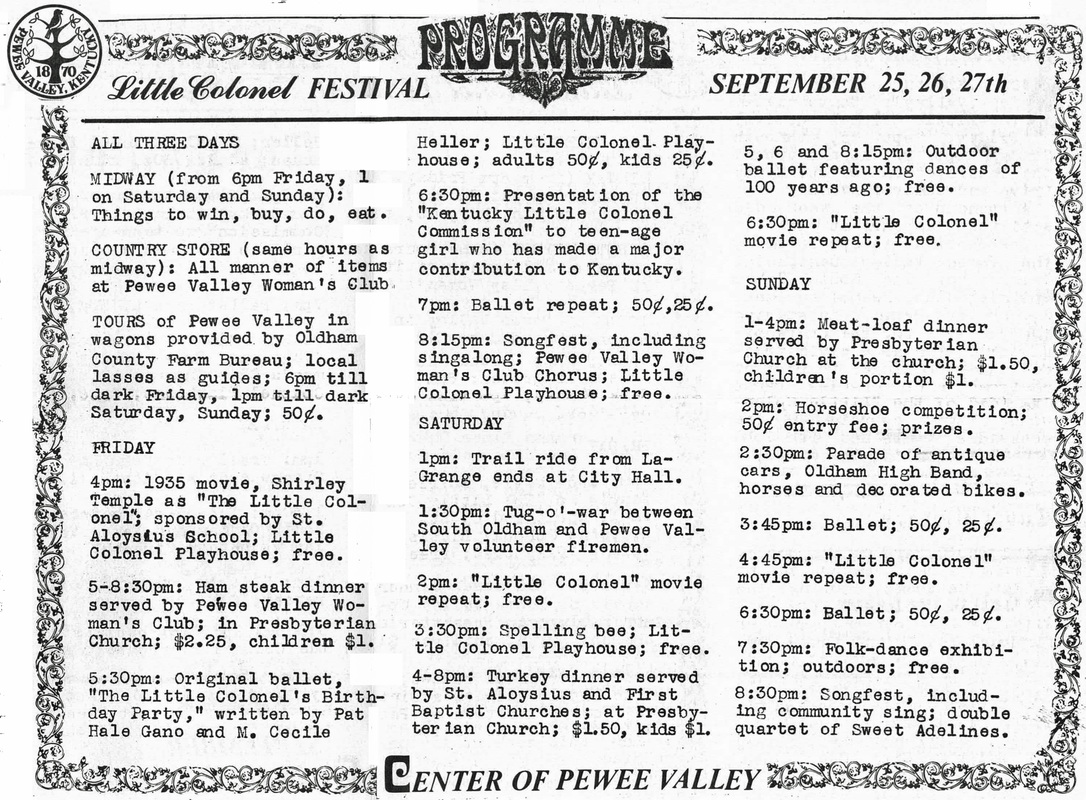 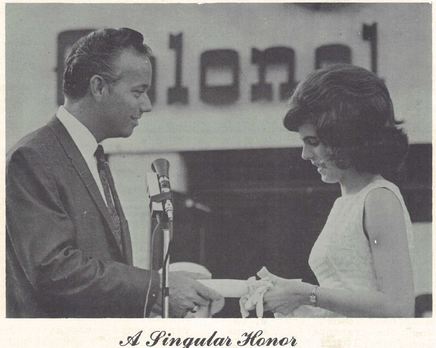 Janie Lee Jones of Richmond, Ky., received the first Little Colonel Commission from Mayor John Frith Stewart at the festival. The 14-year-old was recognized for her work promoting good agricultural practices in Madison County and fostering an interest in farming among area youth.
Food, singing, horses and all things "Little Colonel" were featured during the three-day Little Colonel Festival, held September 25-27 as part of the Centennial Celebration. The festival took place in the "Center of Pewee Valley." (Editor's note: It would be four more years before Town Square was created as a gathering spot for city-wide events.)
​
Peweeans donned straw hats, danced, pitched horseshoes, paraded antique cars, attended showings of "The Little Colonel" movie starring Shirley Temple, watched an original ballet called "The Little Colonel's Birthday Party," ate a lot of cotton candy, took a horseback ride from LaGrange to Town Hall, and toured their town in wagons provided by the Oldham County Farm Bureau.

"A Place Called Pewee Valley," published by the Centennial Commission, also made its debut that weekend.
Centennial Horseback Ride 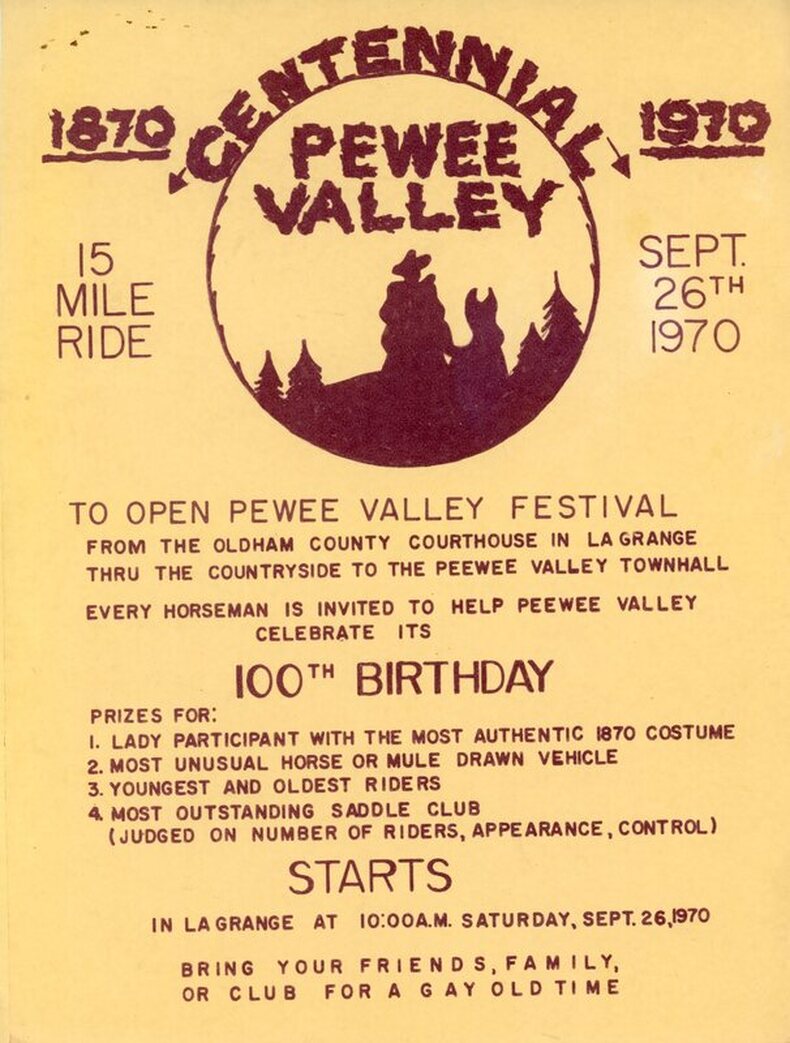 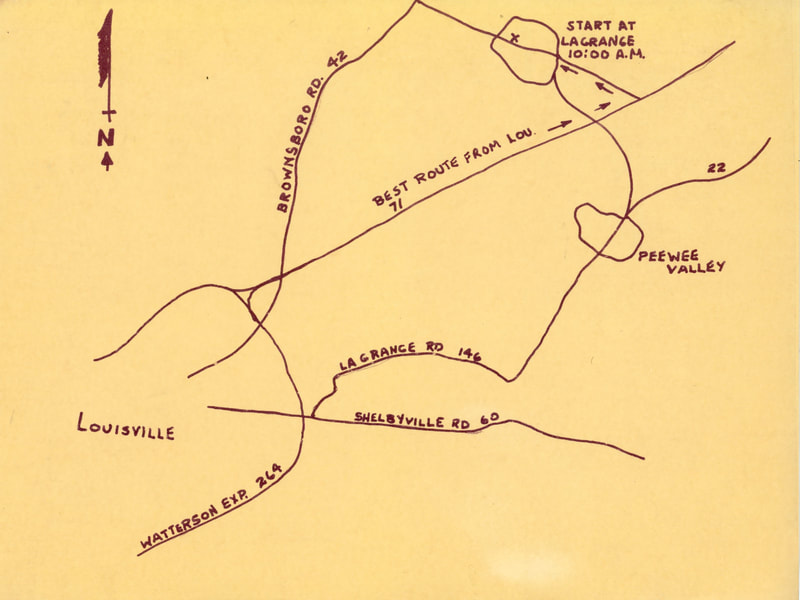 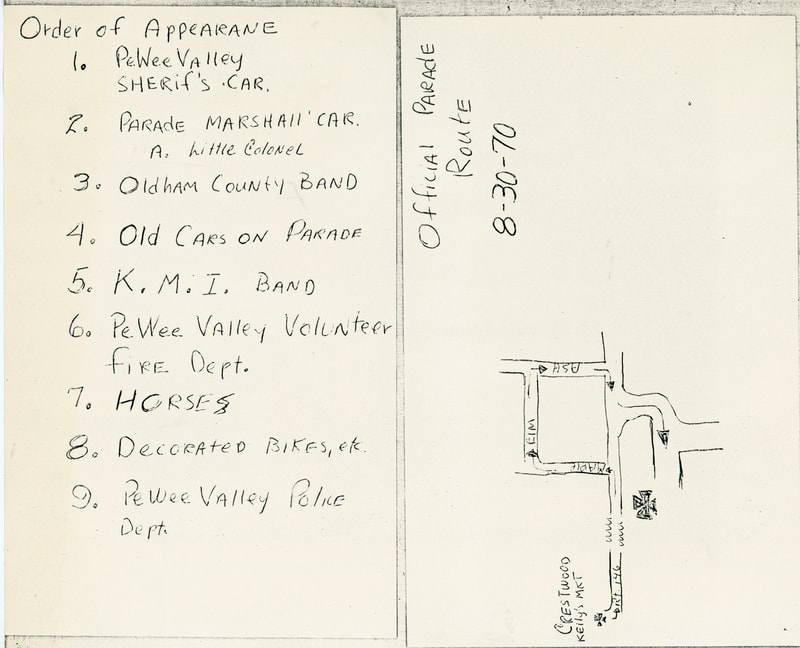 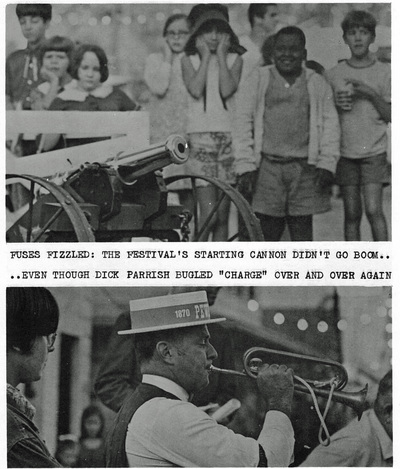 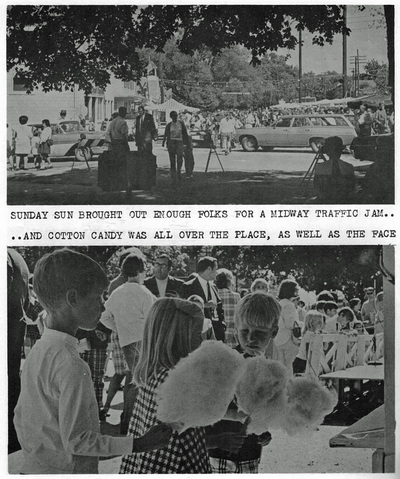 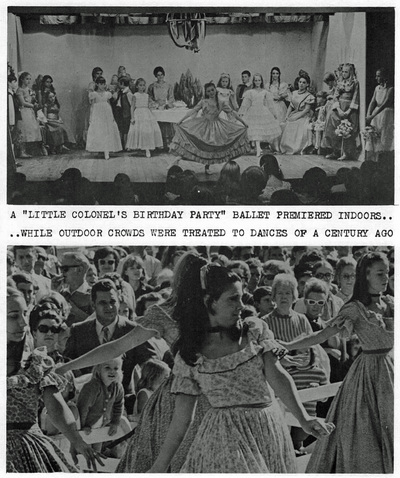 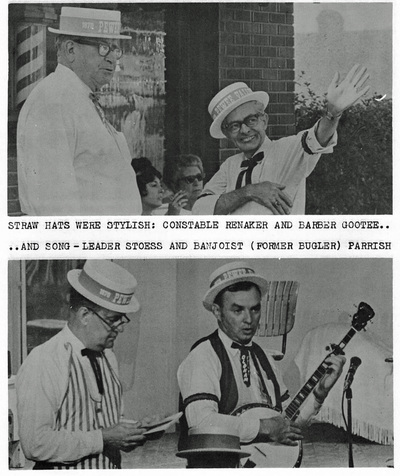 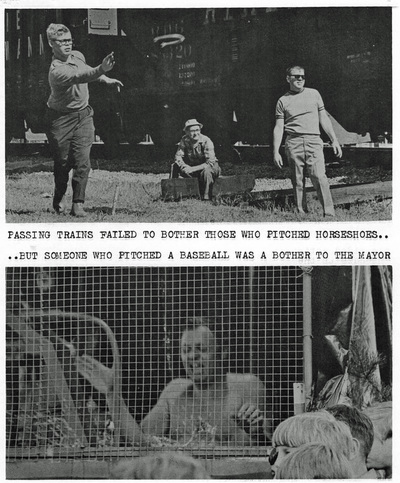 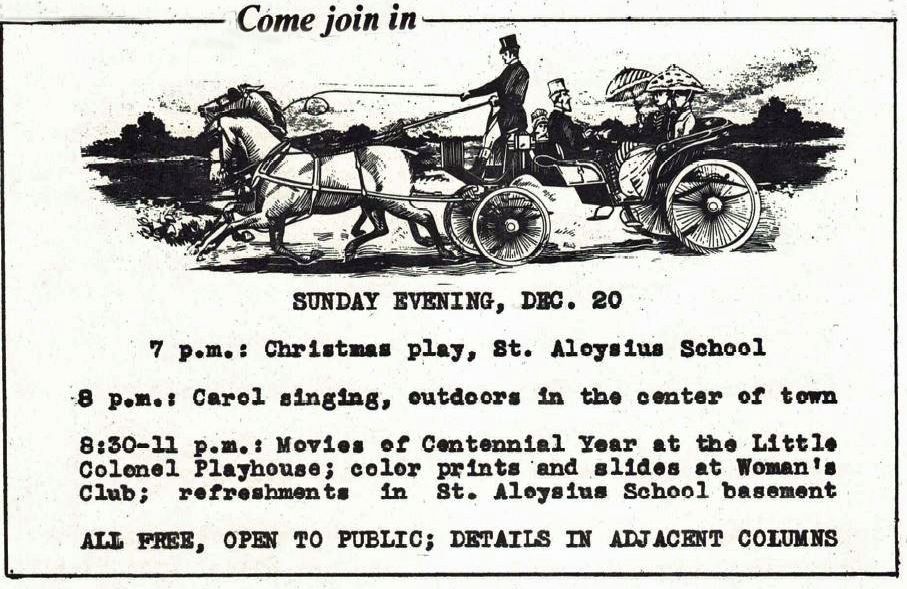 December 1970 Call of the Pewee
Pewee Valley's Centennial year ended with caroling around the yule log and Christmas tree in the center of town. Then residents were invited to the Little Colonel Playhouse to view movies of Centennial events made by George Dean; to the Woman's Club to review color prints and slides of Pewee Valley taken by Courier-Journal and Louisville Times photographer Bill Strode; and to St. Aloysius School's basement for cookies and cocoa.
Publications
Materials published as a part of the Pewee Valley Centennial Celebration included:
Photos of the Centennial Celebration from "Pewee Valley: Land of the Little Colonel" 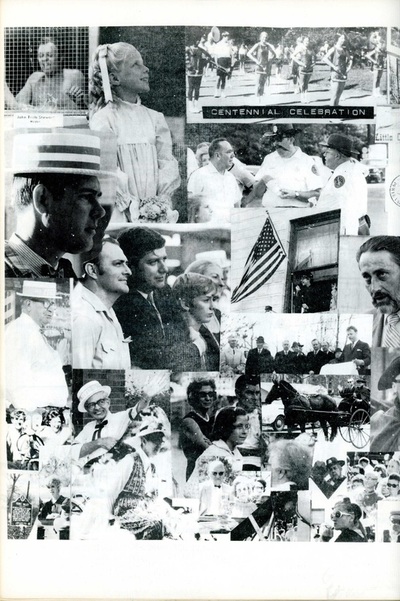 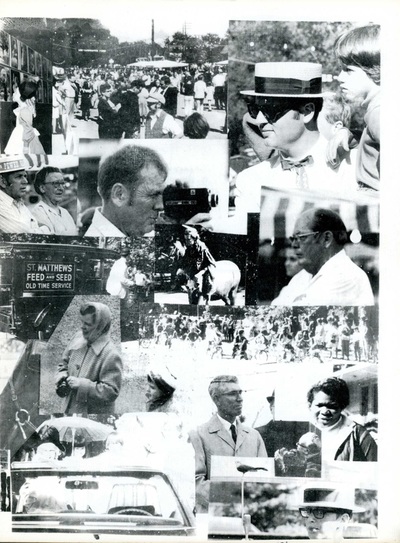 The Centennial Emblem
Pewee Valley's City emblem -- which now adorns everything from the Call of the Pewee's masthead to the police chief's patrol car -- was the winner of a Centennial competition announced in the September 1969 Call:
​
Wanted: An appropriate Pewee Valley Centennial Emblem. So the Centennial Commission is offering $50 cash for the emblem design adjudged best by a qualified jury...

...The emblem will be used in Centennial advertising; as the design on a Pewee Valley flag; on souvenir stationery, and on checks issued next year by the Pewee Valley branch of the Bank of Oldham County...

...Here are the official rules:
1. Emblem must be symbolic and must contain the words "Pewee Valley, Kentucky" and either "1970 Centennial Year" or "1870-1970" in the design.
2. Entry must be submitted in black-and-white, and may be of any size and shape. However, design must be such that emblem would be legible when used in minimum size of one inch if square or circle, or average of one inch in width and depth if any other shape...
3. Rough sketches and professional works will be judged on an equal basis, it being the idea, rather than skill in artwork, which will be considered. All designs must be submitted with the understanding that winning entry is subject to some adaptation, if necessary, by professional artist before being put into use.
4. Winning entrant will be awarded $50 cash. All entries must be received by Oct. 31, 1969...

The winning entry appeared in print for the first time in the November 1969 Call of the Pewee:

The design selected as best for the Pewee Valley Centennial emblem ... is the work of a young lady in Floyds Knobs, Ind., but some research conducted since the judges made their choice indicates there's a much shorter distance between Floyds Knobs and Pewee Valley than you might think.

Creator of the winning design is Carol Brenner (Mrs. H.F.) Tobe. Her entry was selected from among 63 entries offered by 43 entrants.

It turns out Mrs. Brenner's (sic) great-grandfather was a brother of Carl Brenner, noted Kentucky artist who loved to roam the Pewee Valley area in the 1870s seeking subjects for his paintings and etchings.

Carol's parents, Mr. and Mrs. C. Bayless Brenner, live on Chamberlain Lane at Worthington. Her great-grandfather, brother of Carl, was buried in the Pewee Valley Cemetery in 1872. Another brother, Fred, had a blacksmith shop on Rollington Road.

Carol majored in art at the University of Louisville, and taught art in Louisville parochial schools... (Editor's note:  Later in her career, Carol conducted the 1981 Kentucky Historic Resources Inventory of Oldham County, served as the historian at the American Printing House for the Blind's museum, and authored two books on Louisville history: "History in the Making," about the American Printing House for the Blind, published by Butler Books in 2008, and "Worthington and Springdale," part of the Images of America series published by Acadia Publishing in 2015. Carolyn Brooks, who developed Pewee Valley's National Historic Register Districts in 1989, used Carol Tobe's 1981 inventory as a starting point for the project.) 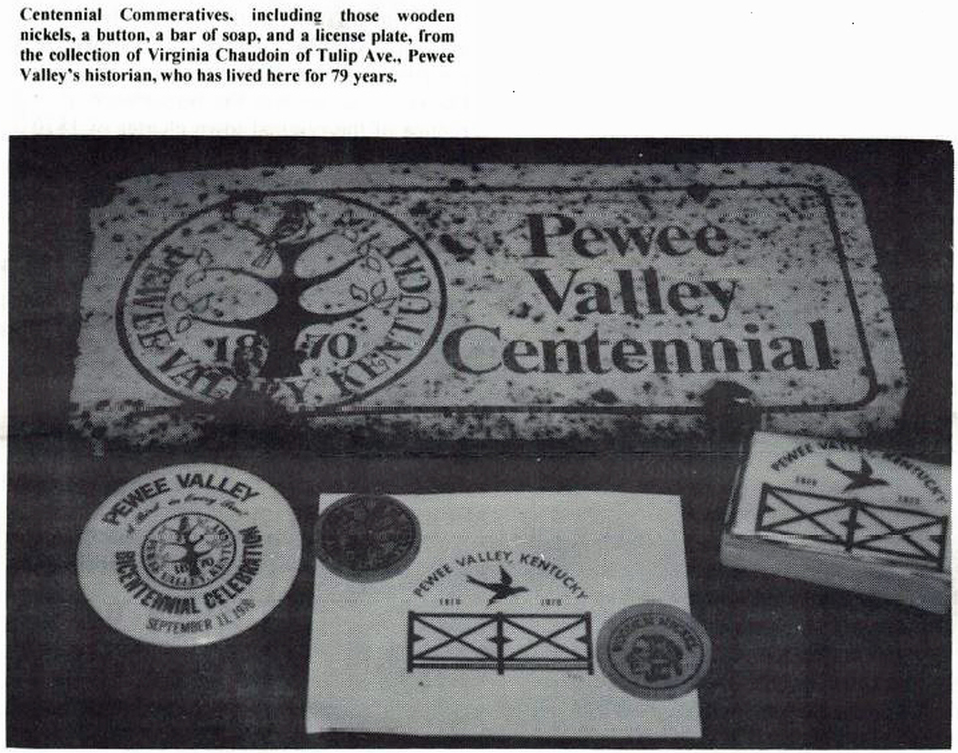 From the April 2000 Call of the Pewee
Related Links
"A Place Called Pewee Valley"
Souvenir Songbook
Courier-Journal & Times Sunday Magazine Feature on Pewee Valley
Script for "THIS IS THE WAY IT WAS", Featuring Noble Butler's Pewee Creation Story
Call of the Pewee