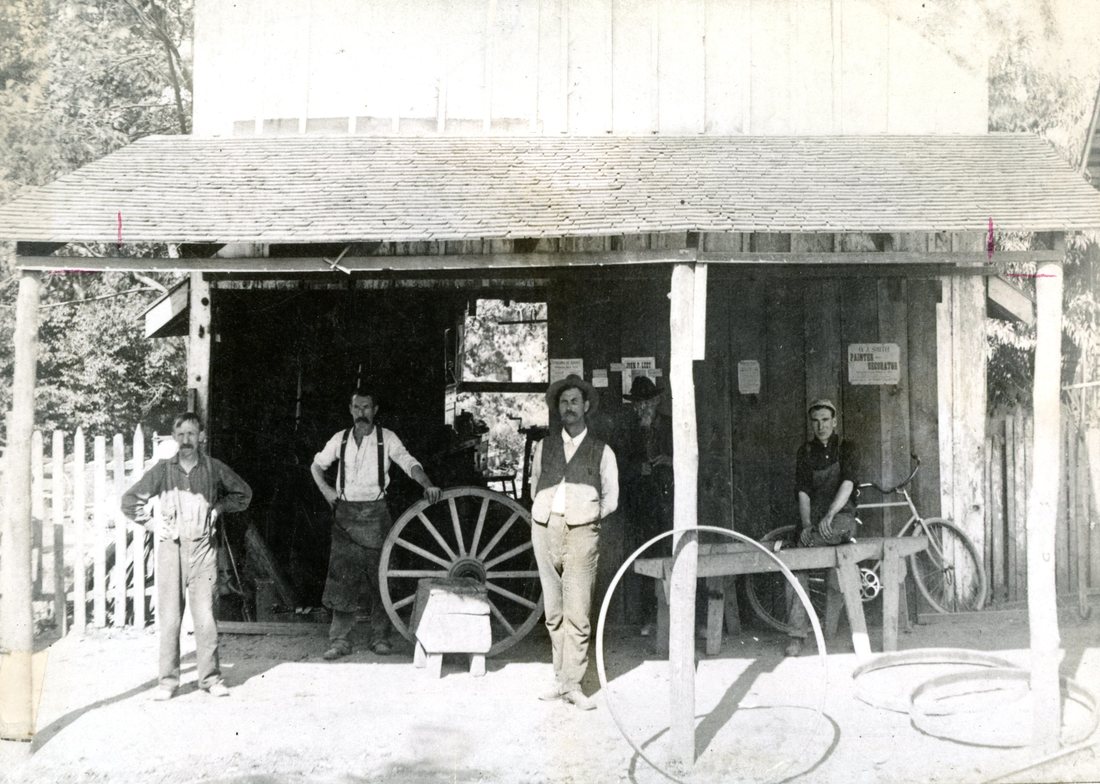 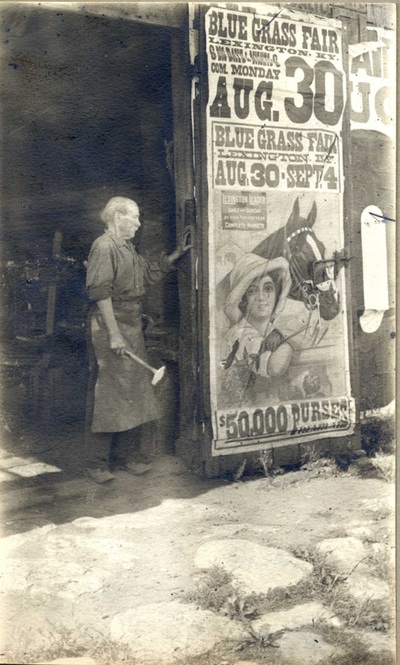 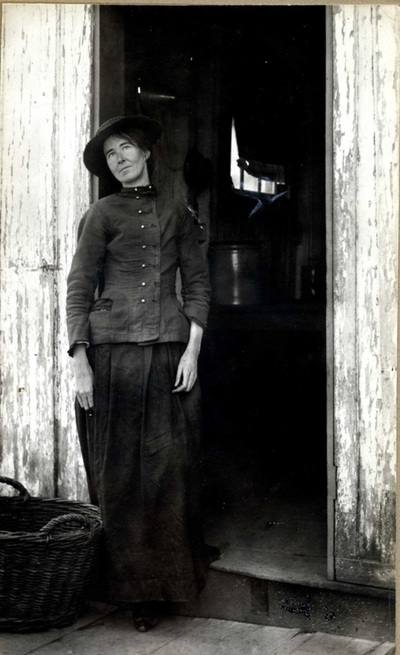 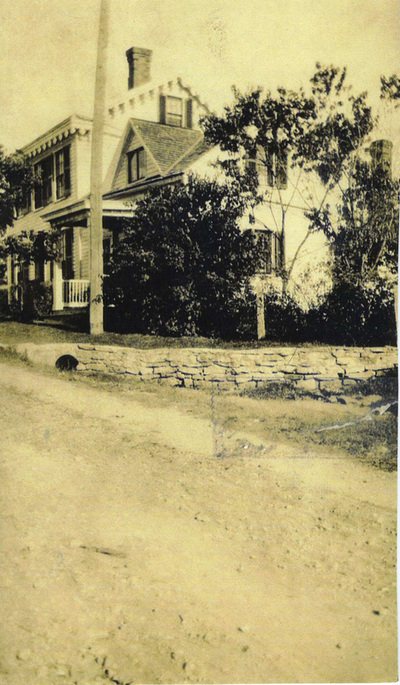 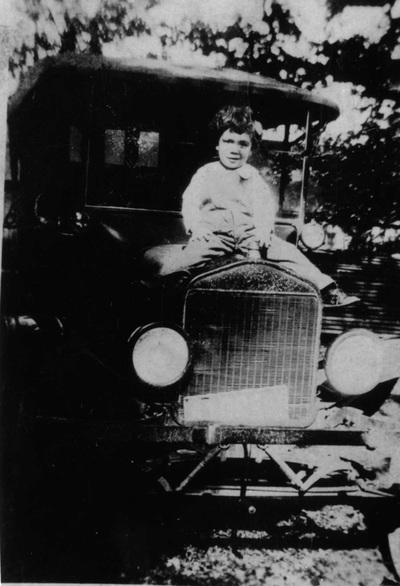 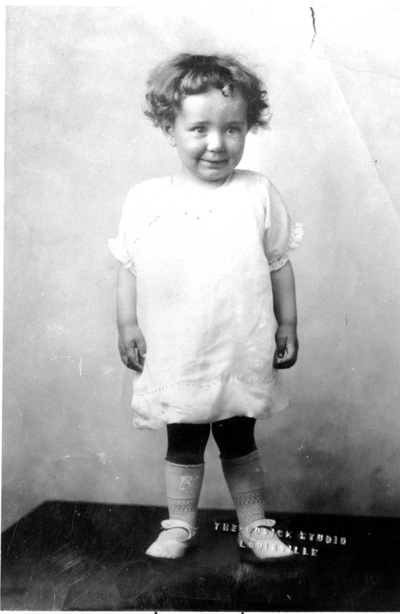 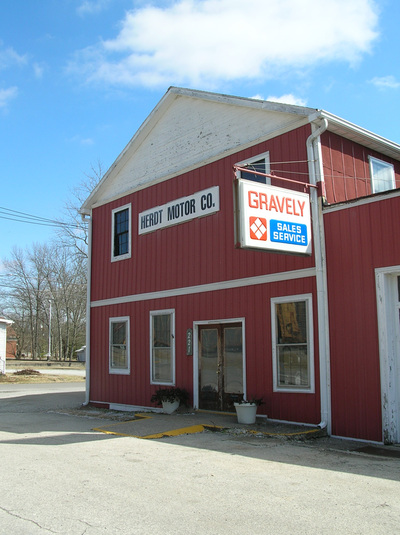 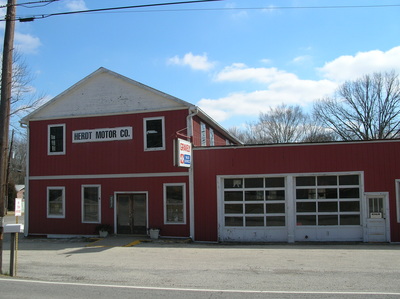 In 1910, the blacksmith shop moved to LaGrange Road and went into the wagon-making business. The Herdts also operated a Ford dealership until WW1.

​Peace in the Valley
Pewee Valley residents
enjoy tranquility amid progress
City’s history shaped by railroad, writers, Civil War
By Helen E. McKinney
Contributing Writer
PEWEE VALLEY, Ky. (November 2005) – Virginia Chaudoin has lived on the same street for 84 years. But life has not been mundane for this lifelong Pewee Valley resident. She’s proud to call the small, quaint town home and, like most residents, very proud to relate its history to anyone who will lend an ear.

2005 November
KY Edition CoverHer grandfather, Jacob Herdt, emigrated from Germany with his parents when he was 8 years old. He became a blacksmith, and her father, William Karl Herdt Sr., was a wagon maker and wheelwright. The family moved from Bullitt County to Central Avenue, near Rollington, in Pewee Valley, around 1895-1900. Jacob and William began the Herdt Motor Company in 1910 and built wagon and truck chassis.
“Daddy sold Ford cars until the war,” said Chaudoin. As a child, it was great fun for her and her brother, Bill Jr., and sister, Louise Marker, to play in the shop. The two-story building had a 30-foot ramp leading to an upstairs room where wagons were painted. Chaudoin recalled getting inside of tires and then rolling down the ramp inside of them.
She remembers her brother, Bill, driving the family to Princeton, Ky., when he was only 12 years old. They went to visit a former schoolteacher who had married a doctor and moved to Princeton. Bill, 88, remembers touring through the Eddyville prison, which he said was a scary experience to someone who had never been out of the calm, peaceful town of Pewee Valley.
Chaudoin got her driver’s license in 1935 when she was 14. But actually owning a car was a rare thing; there were only four cars on her street, Tulip Avenue, while she was growing up.
The Herdt’s home was between their shop and the schoolhouse. Bill said he could hear his granddaddy beating on the anvil while he was at school. He joined the family business in 1934. Bill wasn’t given much choice as to whether or not he wanted to make a career out of the family business, but the Depression “gave me even less choices,” he said.
Bill said fondly that Pewee Valley was the best place to grow up. “We knew all of the people and visited the neighbors a lot.” One close family was their next-door neighbors, the Singers, with whom they played Rook card games in the evenings.

Photo by Don Ward
Louise “Sis” Marker types invoices
at Herdt Motor Co., one of the town’s
oldest businesses.
At one point in Pewee Valley’s history, there were two telegraph offices, the Home and the Cumberland. The latter one was above Jerry’s Grocery and burned in 1912. Chaudoin’s mother worked there when the building caught on fire. Water had to be sent out by train, since there was no public means of obtaining water. It took so long for her mother to call Louisville and get a response that the upstairs portion of the building was destroyed. Mrs. Herdt had to climb out of the upstairs window and down a telephone pole to escape the fire.
Bill, who lives next door to his sister, said he has been a member of the local fire department for more than 70 years. In the early years, “We depended on Anchorage for fire runs,” he said. The firemen weren’t allowed to ride on the truck but were cautioned to get to the fire the best way they could. This usually meant bicycling or hitchhiking.
But long before this, Virginia pioneers had settled in the area in the late 1700s and early 1800s. Previous names for Pewee Valley include Smith’s Depot and Rollington.
Rollington was once a stopping point on the roads from Louisville to Brownsboro, and Middletown to Westport. Around 1810, one of the first settlers were farmers Michael and Rosanna Smith. The Smith family had immigrated to the American colonies in 1717 and were one of the first families to come to the Brownsboro area with a group of German families.

Photo by Don Ward
The Gothic Revival style
Pewee Valley Presbyterian Church
on Central Avenue dates to 1867.
“They came to farm,” said Mary Utley Murphy. Murphy’s husband, Thomas, is a direct descendent of Michael and Rosanna’s son, Henry S. Smith. “They came to Brownsboro looking for land,” said Murphy. They came as far as Rollington, where Michael Smith grew up.
Henry S. Smith owned a great deal of land where Pewee Valley is now situated. “He was a very astute man,” said Murphy of her husband’s ancestor. “He was well before his time in his thinking. He was an entrepreneur whose ideas worked very well.”
Smith was commissioned by the Oldham County Court in 1835 to survey the Rollington to Floydsburg Road. This was the earliest route through present-day Pewee Valley.
The road followed much of today’s Central Avenue before cutting in a northeasterly direction toward Floydsburg.
In 1851, the Louisville and Frankfort Railroad completed its line between these two cities. Smith owned a large tract of land adjacent to the railroad, and a stop called Smith’s Station was established 11/2 miles from the Rollington settlement.
Smith bought 22 acres on the east side of the tracks and began laying out roads and subdividing the land in 1866. He created Ashwood (now Ash), Tulip, Maple and Elm avenues. Smith helped plant native trees along the town’s wide streets and avenues that bare their names to improve the town’s esthetic quality.
The town was so important to Smith because “it was home,” said Murphy. A group of residents derived its name from the large number of Eastern Wood Pewee birds in the area and the “upside down valley” topographical appearance of the town. A town committee accepted the name and the town was incorporated in 1870.
By 1867, several prominent residents financed the construction of a depot, which soon became the heart and sole of the community. It was located on the east side of the railroad tracks at the intersection of Central Avenue and La Grange Road.
The railroad, coupled with the advent of better roads, was responsible in part for the summer homes that began springing up around Smith’s Station after the railroad started commuter service in 1854. A number of wealthy individuals came to Pewee Valley to build country estates, as well as a large number of talented artists, journalists and intellectuals.

Photo by Don Ward
Bill Herdt Jr., Marker’s brother,
poses in his workshop at Herdt Motor Co.
He is considered one of the town’s
local historians.
“Pewee Valley originated as a summer resort, then became a bedroom town for Louisville,” said Murphy. Originally from Mississippi, Murphy, 78, has had ties to Pewee Valley since her father was transferred there with Standard Oil of Kentucky in 1949. “When I first came, I found the people absolutely delightful,” she said.
It was during the late 19th century that Pewee Valley reached its full potential as a summer vacation spot. The Villa Ridge Inn was built on a prominent knoll near the train depot in 1889. The three story, approximately 100-room Queen Anne-style hotel was built by developer Horace F. Smith, whose older brother, Milton, was president of the Louisville and Nashville Railroad.
The Kentucky Division of United Confederate Veterans later purchased the hotel. Dedicated in 1902 by Gov. J.C.W. Beckham, the Villa Ridge Inn became the Kentucky Confederate Home for Veterans of the War Between the States.
Chaudoin remembered visiting the Confederate Home as a child to dance and “sing for the old soldiers,” she said. But not all of the soldiers were disabled. One spry veteran in particular remained in her mind. He was a 93-year-old veteran who rode a bicycle around the grounds.
Although the home was destroyed by fire on March 25, 1920, its residents can still be remembered by a visit to the public cemetery, located at the end of Maple Avenue, which contains a Confederate section. In this section are buried 313 Confederate veterans, their graves marked with small white crosses.
Several prominent residents, including Henry S. Smith, realized that these veterans needed a proper burial place and didn’t have one. The state ultimately bought a small plot in the public cemetery for this purpose. But the privately maintained public cemetery went downhill, since family members did not tend to their ancestors’ graves, said Murphy, who is chairman of the board of directors for the cemetery.

Photo by Don Ward
A CSX train rumbles through town.
Due to the combined efforts of three men, former Sheriff Buford Renacker, Mackie Fletcher and Norris Summers, the cemetery was rededicated in 1955 during Gov. Happy Chandler’s second term of office. Henry S. Smith’s wife, Susan, died on Aug. 26, 1871, and is the first known person to have been buried in the public cemetery. Smith died on March 18, 1883, and is buried beside her.
Many of the old mansions in Pewee Valley stem from the boat and railway fortunes made in Louisville after the Civil War. It is this era that Annie Fellows Johnson chose to write about in her Little Colonel series and forever made Pewee Valley popular.
Those idyllic days may be gone, but Murphy best stated the attitude of most residents by saying, “My children grew up here and I still call this home.”
Promotional Calendar Featuring 1916 Cars Published by the Herdt Motor Company in 1972 at the Pewee Valley Museum 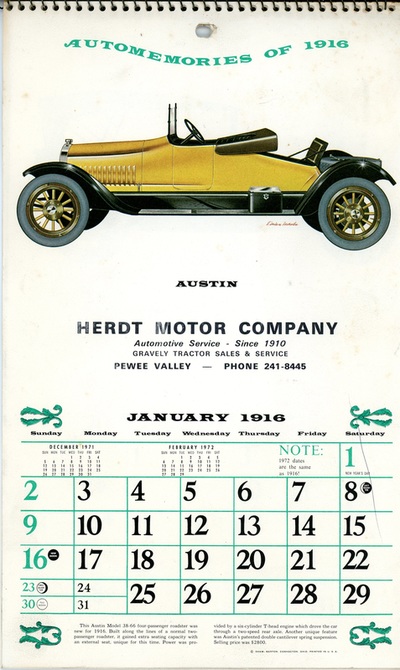 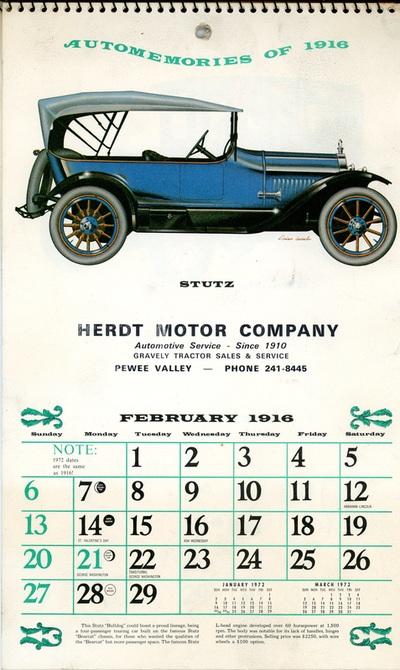 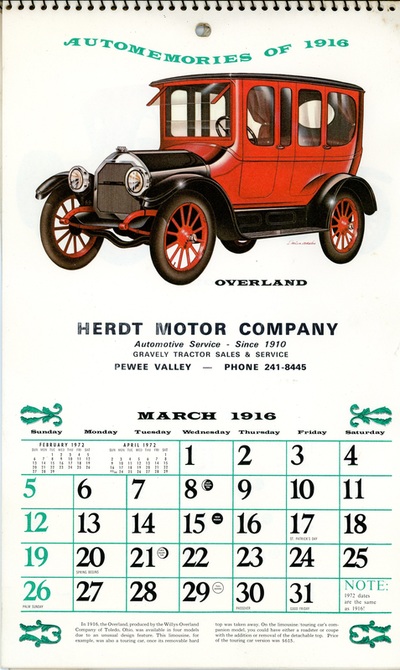 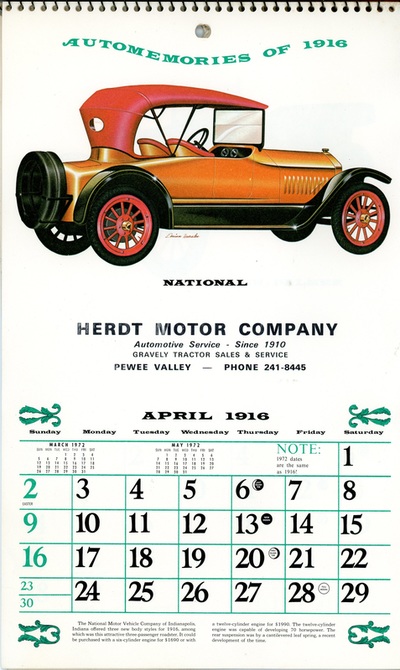 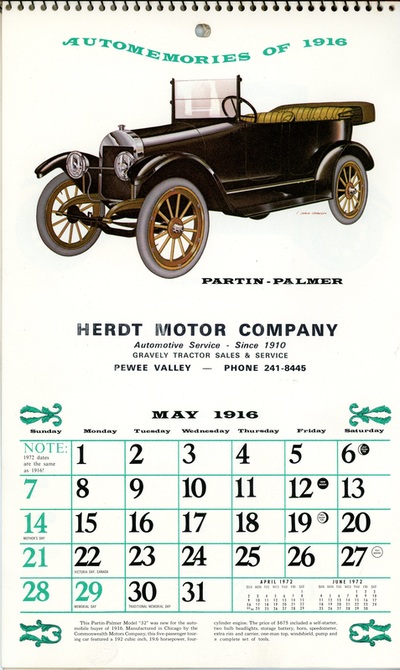 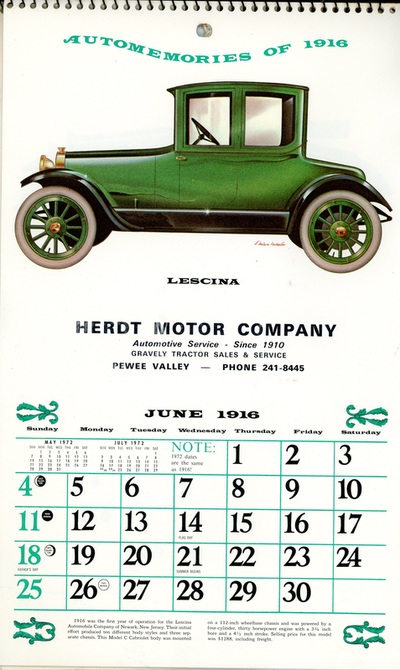 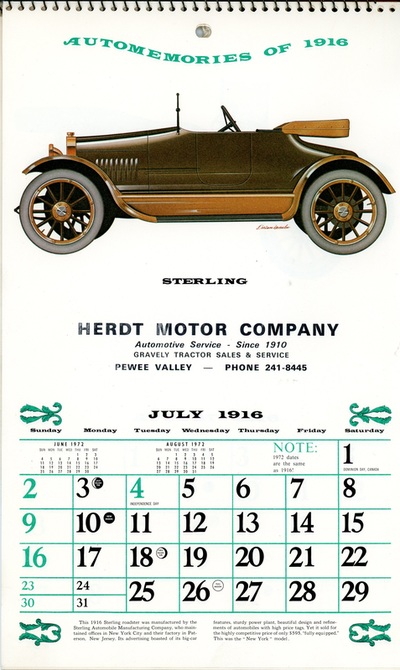 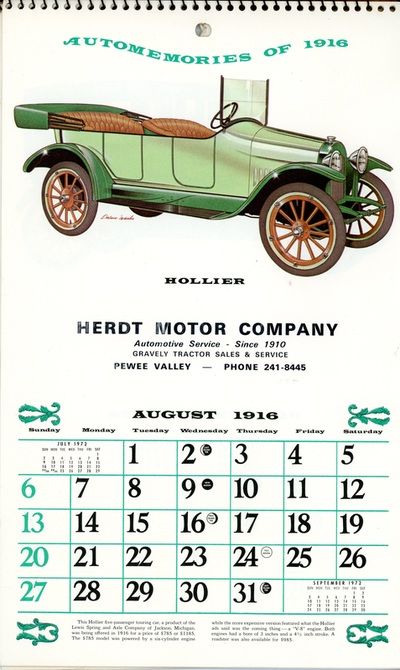 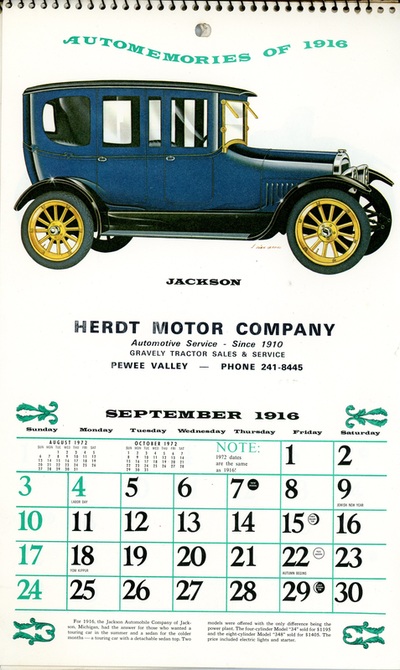 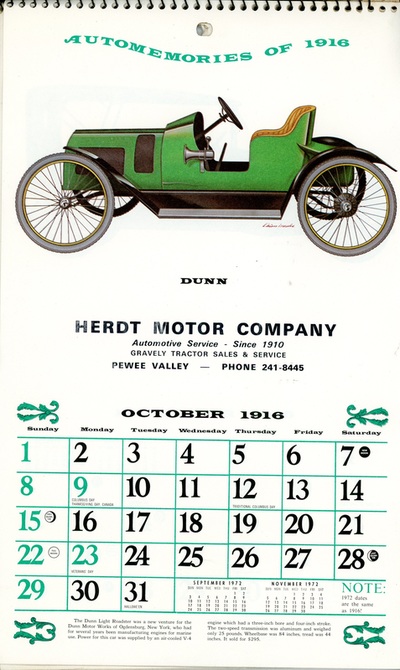 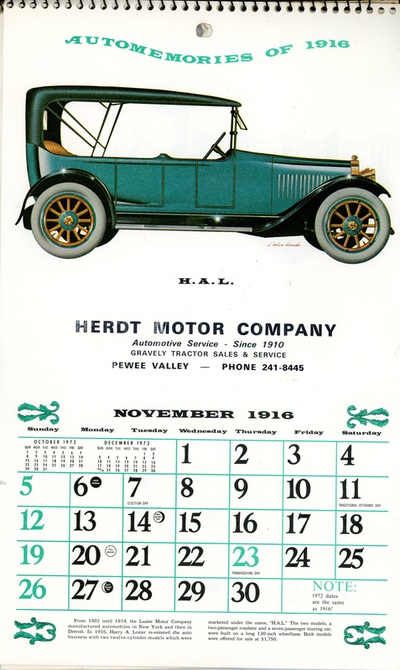 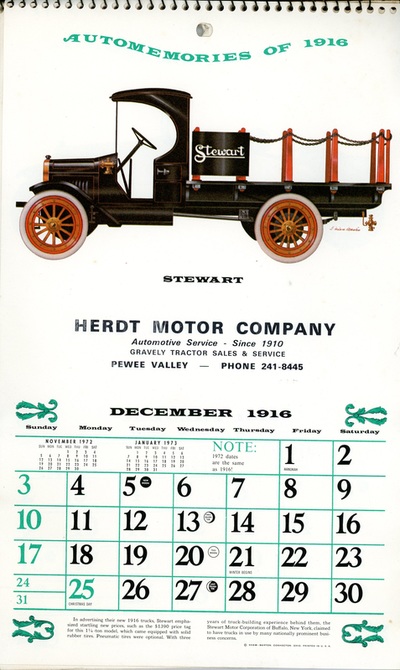