Town Hall's cupola before it was replaced in September 2016. Photo by Town Councilman Norman Schippert, June, 2016
The bell in Pewee Valley's Town Hall first called the Town Council together on August 9, 1897. Today, the Pewee Valley Town Hall is the only surviving original town hall in Oldham County that is still being used for its intended purpose.

According to a February 4, 1897 entry in the Minute Books of Pewee Valley:

The Board considered the bids and on March 8, the Finance Committee reported there was enough money "on hands and in sight" to go ahead with the project. The building was completed in August, but wasn't used regularly until October 1897. On June 6, 1898, the Town Council allocated an additional $4.40 for furnishing their new meeting place.

​Prior to the erection of Town Hall, the Town Council met at various homes, W.N. Jurey's store, Foley's store and the railroad depot.
​
Town Hall Through the Years: 1909-2016 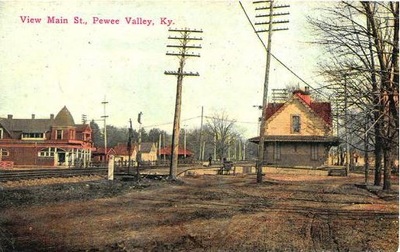 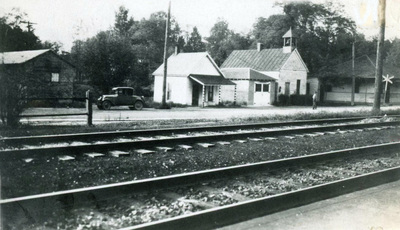 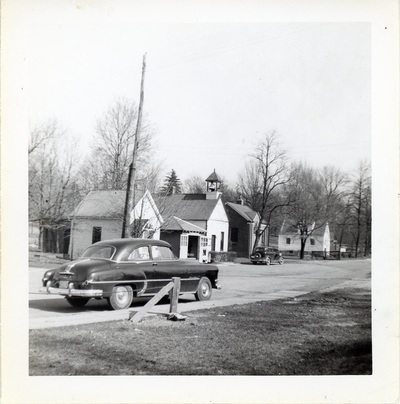 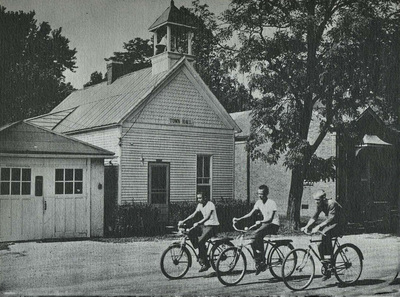 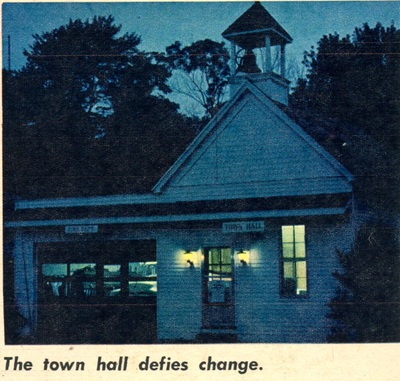 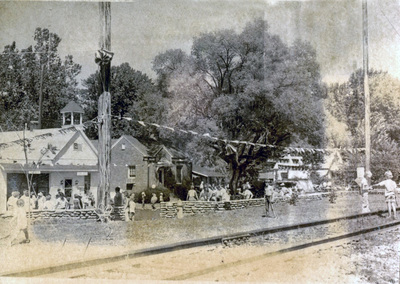 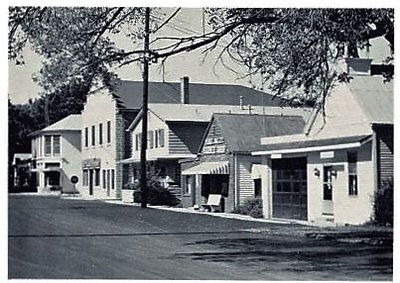 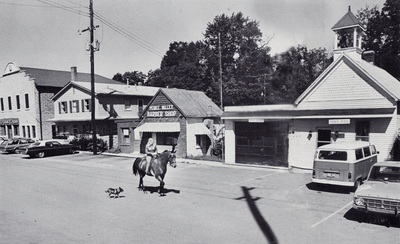 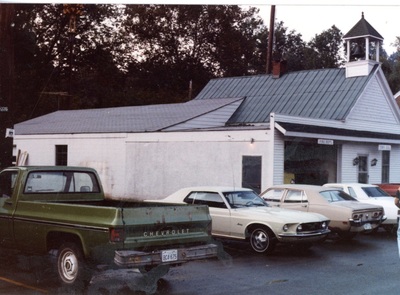 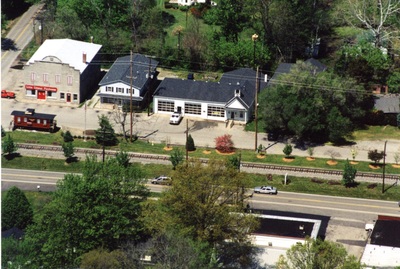 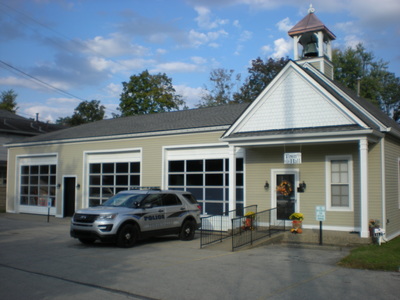 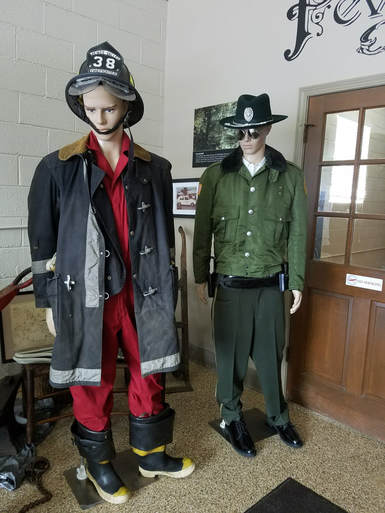 Volunteer firefighter Bill Herdt's 1980s-era red coveralls are on display at the Pewee Valley Museum, courtesy of his niece Annie Weingardt. Bunkers from that era, including the helmet, canvas coat and three-quarter boots, were supplied by the PVFD.
​Over the past century, Town Hall has received two major additions. The first took place in the mid-1960s, when a large fire bay was added by the Pewee Valley Fire Department.  Prior to the expansion, the fire department had been housed in a separate, wooden garage beside Town Hall since its founding in 1929. Bill Herdt, who started volunteering with Pewee Valley's "bucket brigade" that year, described the town's first fire station in an April 24, 2001 Courier-Journal story by Leslie Ellis  titled, "Department honors long-time fire fighter:"

... That original station was just "just wide enough and long enough to get a truck and a coal stove in it," said Herdt, who was 13 when he joined and 15 when he started driving the Oldham County Ford Model T truck to fires.

It had three, 30-gallon tanks -- which were  refilled by the bucket brigade with water from wells or cisterns. Volunteer firefighters shared one ax; they had no protective clothing...

The new fire bay was big enough to hold three trucks, parked one behind the other. The larger trucks drove out through the garage door on Mt. Mercy Drive. The smaller field truck drove out through the back -- where the Central Park pond and mural are now. A gravel drive behind the physician office and Little Colonel Playhouse next door led directly to Central Avenue, recalls former Chief Tim Kehl.

Plans for this first expansion were drawn up by Peweean and civil engineer Charles Schimpeler. Dated May 4, 1965, they are on file in the City of Pewee Valley archives at Town Hall and are reproduced below:
​ 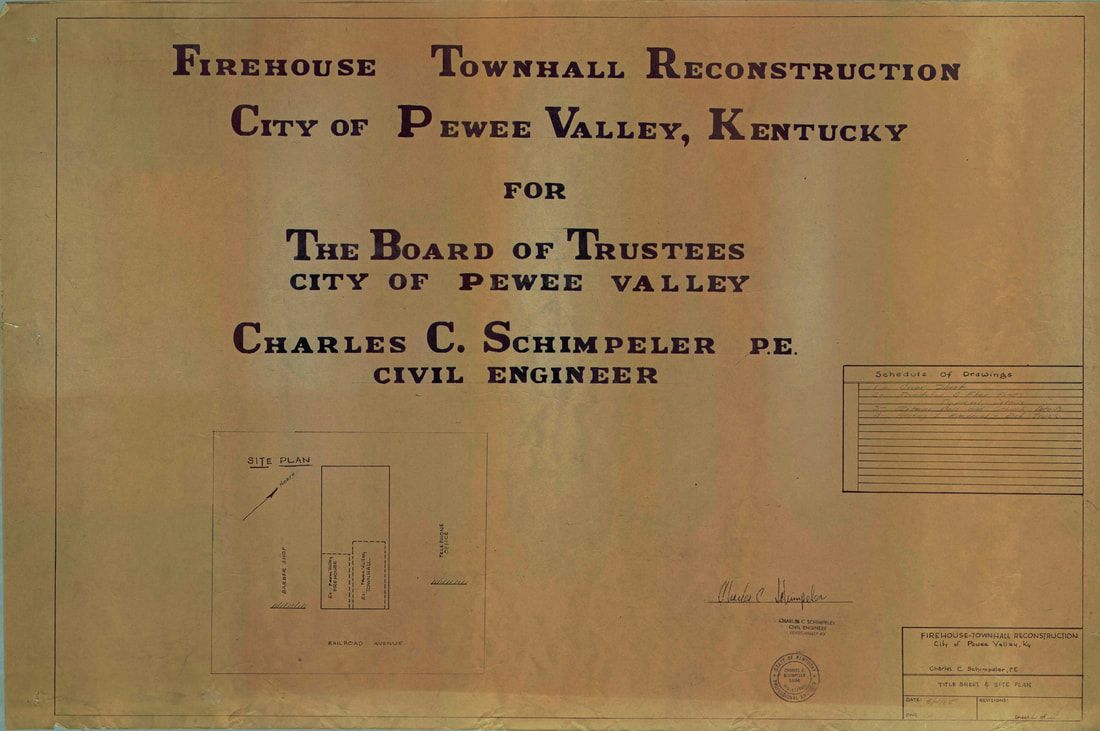 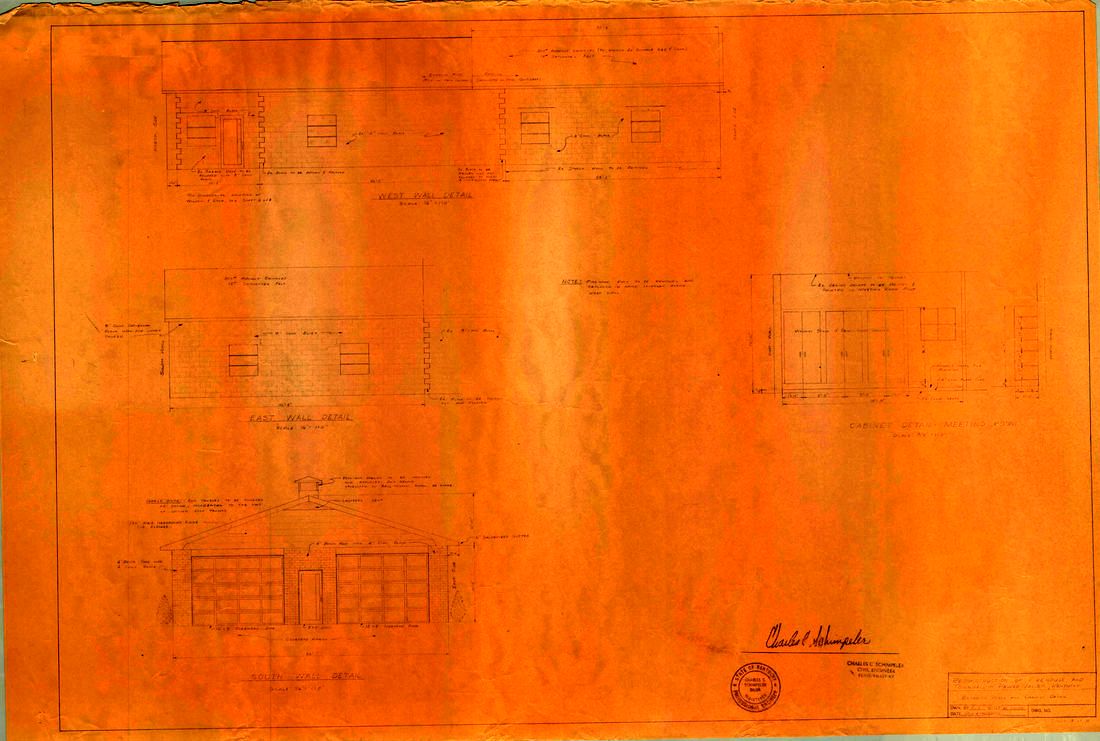 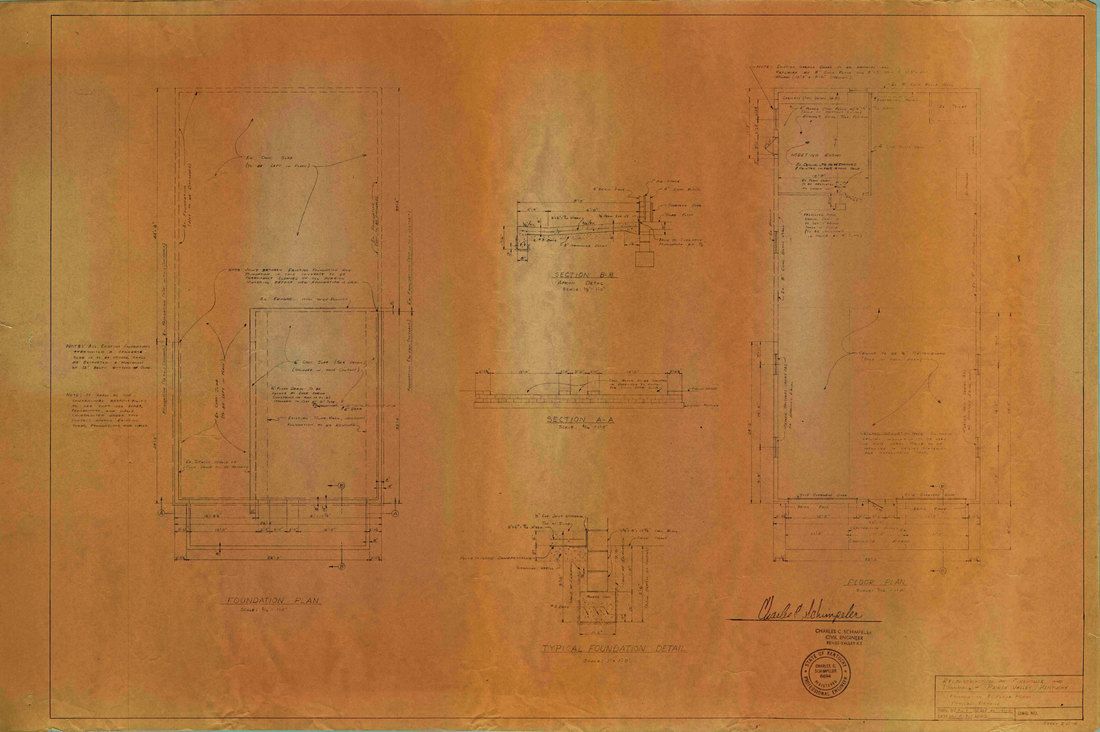 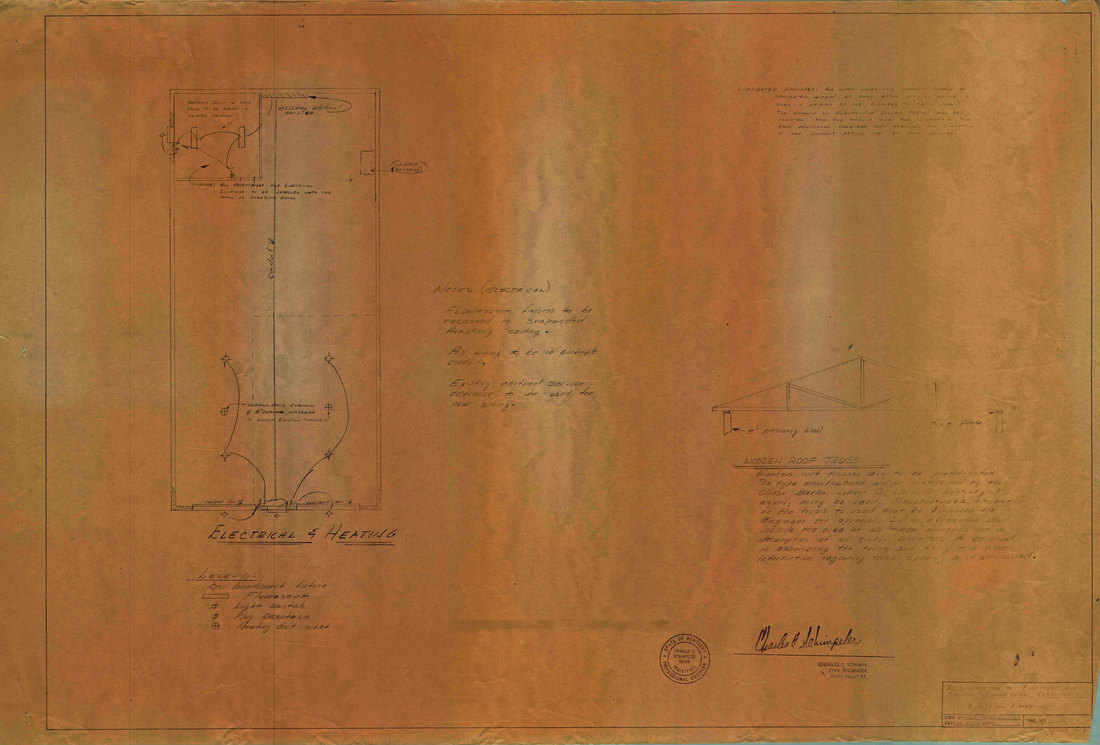 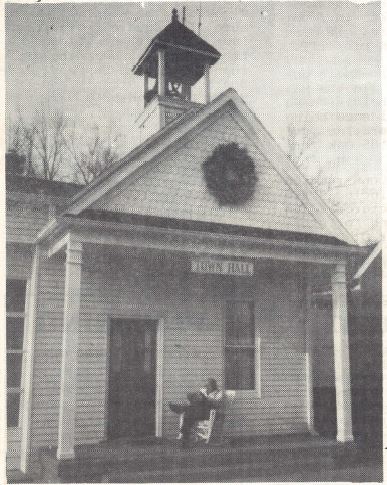 Just in time to sport a Christmas wreath upon its gable the inviting new front porch entrance of our old Town Hall has been completed.

​The work was done by Pewee Ken Hinton and his father at a bargain price.

The gable, incidentally, consists of the original rounded shingles that were on the formerly porchless gable, plus some the Hintons fashioned themselves to take the place of shingles that had weathered too much to be transferred.

The only thing remaining to be done is the reinstallation of a pair of gas lamps which were removed from the doorway when new siding was being put on at the time the firehouse was extended.
1988 Bell Tower Repair 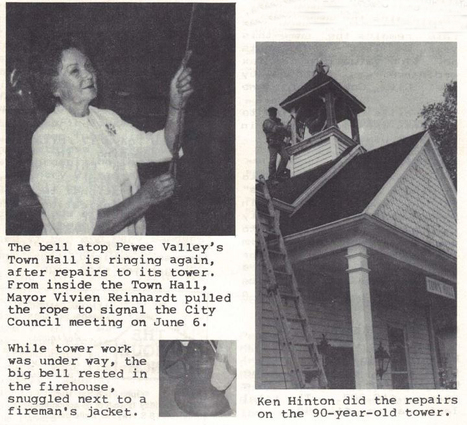 Ring that bell, Mayor Reinhart. From the June 1988 Call of the Pewee
​Six years after the front porch was added, City Council decided to repair Town Hall's bell tower. Angela Struck reported on the project for the April 13, 1988 Courier-Journal:

As in days of old, the bell atop Pewee Valley's Town Hall will soon ring -- this time to gather townspeople together.

The City Council has decided to repair the bell tower and ring the 90-year-old bell to herald its monthly meetings, a move that will add to the historic atmosphere of the city, Mayor Vivien Reinhardt says.

"We're trying to preserve Pewee Valley as it always has been," she said. "People seem to want that, and people seem to move here because they like the atmosphere of the town."

... The bell ... once called firefighters and volunteers out for emergencies, said Bill Herdt, former fire chief and former council member.

Herdt, who has lived in Pewee Valley all of his 71 years, said using the bell again will enhance the city's historic atmosphere...

...The last time he remembers hearing the bell ring was in 1976, as the city celebrated the nation's bicentennial, Herdt ... said it hadn't been used regularly since about 1929, when the firehouse got an electric siren...​
2000: City Purchases Fire Department Property
In January 31, 2000, at a special meeting of the Pewee Valley City Council, the city voted to buy the old firehouse property. The February 9, 2000 Courier-Journal reported that decision was not without controversy:

​Pewee Valley will spend $90,000 to buy and protect a small piece of land adjoining Town Hall.

The land, which is zoned commercial, is expected to become vacant when the fire district's new building on Foley Avenue is completed in June.

The City Council voted 5-1, with Nathan Stewart opposed, to buy the property at a special meeting Jan. 31.

Dr. Steven Applegate, a Pewee Valley resident, said he would have purchased the property if the city had not exercised its option to buy it.

Council members and Mayor Jim Kincer said they weren't worried about what Applegate would do with the property, but, instead, wanted to preserve it for the future.

"The whole goal is to protect the site," Kincer said. "And this will allow us to do that as we see fit."

In a later interview, Applegate said he was disappointed with the city's decision and with the fact that he wasn't invited to the special meeting.

"I want to talk to them about it," he said. "It bugs me that they are upping taxes and buying property. My philosophy has always been to keep that historic Pewee Valley look."

Council member Nathan Stewart initially proposed that the city let Applegate buy the property if he agreed to a series of deed restrictions, but the council rejected that proposal. Stewart said after the meeting that he made the suggestion because the city doesn't "have any immediate plans for the land."

But council member Pat Payne, who made the motion to buy the land, said there is a need for the property and it should belong to the city. "If we don't do it now, then it's gone forever ... it's attached to our building, and I wanted to keep the integrity of that for the future."

Payne said she would like to keep the property for public use.

We used to have art festivals and an antique show here in Pewee Valley," Payne said after the meeting. "My purpose is to keep it for the residents. We have no space."​​
Your Tax Dollars at Work: Placing the New, Copper-Topped Cupola Atop Town Hall in September 2016 Photos by Town Clerk Laura Eichenberger 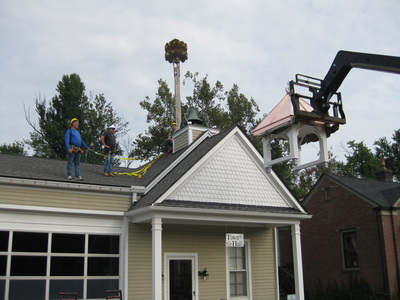 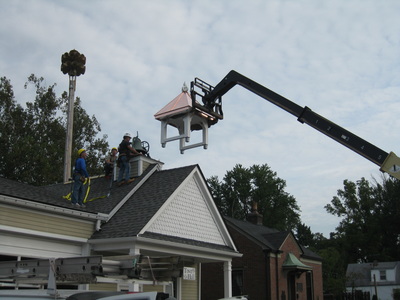 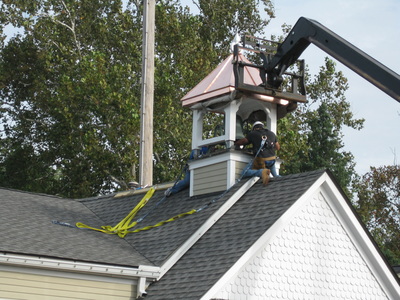 2016 Town Hall Renovation
​In the summer of 2016, the City of Pewee Valley under Mayor Bob Rogers spent some $16,000 to restore Town Hall's exterior. Rotting wood siding was replaced by fire-resistant cement board, insulation was added to lower the city's utility bills, new columns replaced decaying two-by-fours holding up the front porch, and a new copper-topped cupola replaced the original. Town Hall was also painted beige -- the first time in its 119-year history it has been any color other than white. You're not in Kansas anymore, Dorothy. Town Hall is now in Technicolor!
The Jail 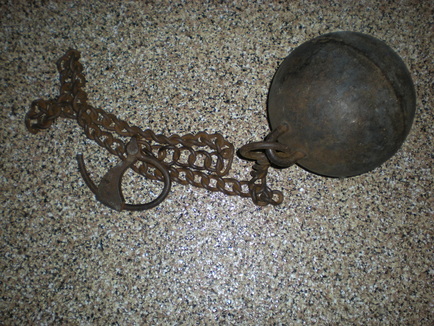 The ball and chain from Pewee Valley's jail is on display at the Pewee Valley Museum.
​Though people are usually trying to break out of jail, Pewee Valley's jail bore the unique distinction of having people break into it. Just five years after the jail cells were built, they were used as overnight hotel accommodations by two men who were passing through,  according to this February 21, 1902 story from the Courier-Journal:

When Marshal J.T. Flynn visited the Pewee Valley jail this morning he discovered two strangers peacefully snoring in one of the cells. The Marshal, to whom the idea of breaking into a jail is a novel one, proceeded to arouse the men and inquire the reason for their conduct. They, in no wise disconcerted, said that when they arrived in Pewee Thursday night everything was closed, and they dared not arouse anyone to secure lodging. Accordingly they made a search for the jail, and when they were successful entered and spent the night as comfortably as possible. Marshal Flynn is a credulous man, so he made no comment on the strange proceedings and gave the men their breakfast, after which he hinted that by following the railroad tracks they would find their way out of town.

The men accordingly surmised that it would not be in good taste for them to argue the question, and they went on their way.

The town's jail cells are long gone, but a ball and chain from the old jail is on display at the Pewee Valley Museum.
The Roll-Top Desk at Town Hall 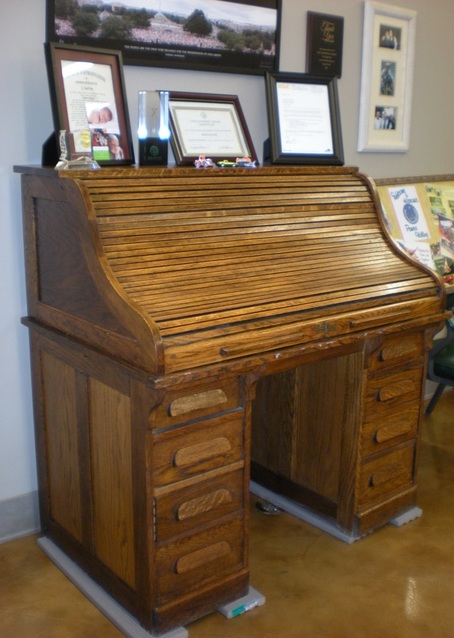 Morrison was a retired farmer from East Milton in Trimble County, when he and his wife, Mary, moved to Maple Avenue in the 1920s. Late Pewee Valley Historian Virginia Herdt "Gin" Chaudoin said that prior to his stint as Town Marshall, Morrison owned a team of work horses and used them to haul coal from the railroad siding located in front of Herdt Motors and the Old Sweet Shop. As she explained in the October 1988 Call of the Pewee:

...Coal cars were always stored on the siding ... Since coal was our main source for warmth and cooking, and with the Confederate Home, you can be sure the coal wagons and horses were a very important part of our lives...

Morrison won the marshal appointment by writing this letter to the Town Board, which included his offer of the roll-top desk:

To the Board of Trustees of Pewee Valley:

In making this proposition to you, I will have to list the work in parts.

Part I --
The Town Hall. It is a disgrace to our town. I would want to renovate and make it a fit meeting place. All it would take would be soap and water, some work and some paint.

I will donate roll-top desk and chair.

Part II --
The Jail. It needs complete renovating and new bedding. You don't know when you will have a call for same. Have it fit for the unlucky person.

Part III --
Fire Department. Which all of you know was the talk of the town as to what you were going to do with it. I think I know your views on this. I would, with your help, make this Fire Department one of the best in the state.

Part IV --
The Duties of the Town Marshal. The law is plain on this. I will assure you every letter of the law will be carried out, and every part of the town will be patrolled at least once a week for anything that is not within the limits of the law.

Part V --
Streets. This is one of the big problems you are going to solve. I say this because it can be done with the right man, a man who has some ideas of his own and can use same to overcome all obstacles. I have had experience with all such machines as rollers and graders.

Part VI --
Collection of Taxes. I will do the collecting and turn over to the proper authorities.

Here is a suggestion I think would be a good thing for all concerned. Buy a truck. This should be a two yard dump which would haul all your material for town and also pull your graders and all other work that would have to be done for town, and with all this done, could be made to win a good profit for the town by custom hauling for others.