​This pen and ink series by Bill Ferebee (1927-2015) depicts four different Pewee Valley scenes: Town Hall, the Train Depot, the Pewee Valley Cemetery gates as they appeared ca. 1989, and Edgewood, before the estate was subdivided and the house was moved in 1988.
​ 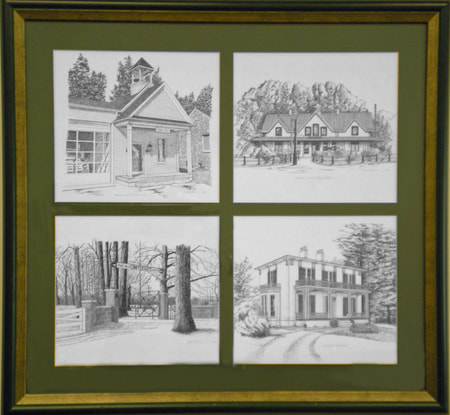 ​​A native of Charlotte, Tenn., with college training in commercial art, Bill came to Louisville when he was offered a job at ad agency Zimmer McClaskey and Lewis. 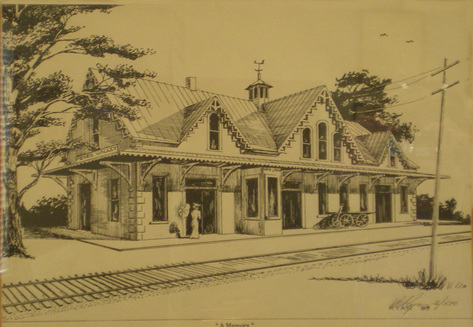 According to the February 1989 Call of the Pewee, this sketch of the Pewee Valley train depot, titled, "A Memory," was done by retired architect, and former Pewee resident and city councilman Bailey Ryan.

The sketch was sold at Beard's Grocery in several different forms:
In 2014, a framed print was donated to the City by the family of Lester Griffin in his memory.
Photo of Edgewood 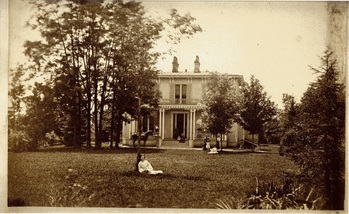 This photo of Edgewood, taken during the years the Craig family owned it, was a gift of Louise Herdt "Sis" Marker. The photo shows Alice Craig (Peay), granddaughter of Annie Craig, in the foreground, with other members of the Craig family in the rear.
​
The heavyset woman at the right, standing in front of the porch with two children, is likely Mamie Craig Lawton, Alice's aunt. This snapshot in time probably dates from before Alice's 1903 wedding to Frank Gatchel.
Carole Logan 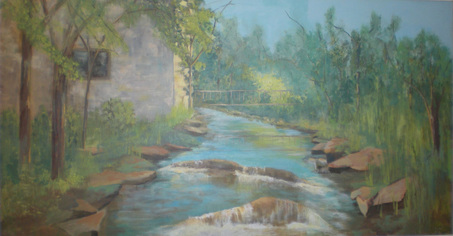 ​A Kate Matthews photo of the old steam-powered lumber mill once located at the end of Pewee Valley's Old Mill Road was the inspiration for this 2013 painting by artist Carole Logan.  Carole, with the help of Bellarmine University student (and Peweean) Emily Mintman, used the painting to create a 15- by 30-foot mural on the backside of Town Hall. The mural serves as a backdrop for the water feature  in Central Park. 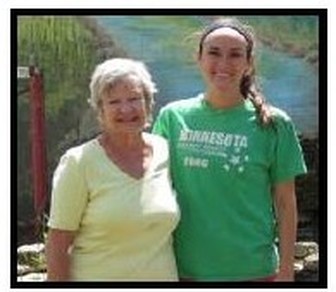 Carole Logan, left, and Emily Mintman, right, shown with the Central Park mural in the background. From the August 2013 Call of the Pewee.
​
Carole graduated from the University of Louisville with a B.F.A. Her outstanding work as a studio art major earned her the coveted Winthrop Allen Award. She has received commissions from the Fund for the Arts, Heaven Hill Distillery, Kentucky Mirror and Plate Glass, and the Louisville Development Authority, which requested a painting for Louisville Mayor Jerry Abramson when he retired.


​Her work is displayed at Gallery 104 in LaGrange, Ky., and at her Studio 146 on the Sweet Shop's first floor in Pewee Valley.
Shelley Schippert 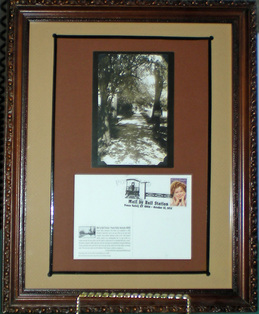 This framed postcard featuring a Kate Matthews photo of "The beaten path to the post office" on the front and a special Mail By Rail Station cancellation on the back was designed by local artist Shelley Schippert.

The post card and special cancellation were developed by the Pewee Valley Historical Society and Pewee Valley Post Office to commemorate the restoration and re-erection of the city's 19th century mail crane in front of the caboose on October 22, 2016. 200 copies of the limited edition post card were made and were gone in a few days time. In addition to handling local requests for the cancellation , the post office received nearly 80 requests from residents of 27 different states, as well as Germany, Austria, Lichtenstein and Belgium. 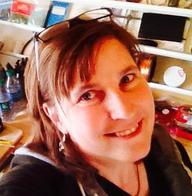 Award-winning graphic designer Shelley Schippert is Senior Manager Asset Management Technology at Brown-Forman Global Design. A graduate of the University of Louisville with a Bachelor's in Fine Art and an Associate's Degree in Information Science and Data Processing from the Speed School, Shelley has lived in Pewee Valley since 1998 and is a member of the Pewee Valley Historical Society. Over the years, she has lent her talents to several other historical society projects,  including the Little Colonel Tour Book in 2007 and the Kentucky Confederate Home Confederate Memorial Day Observance in 2010.​
Jim Mahanes
Mahanes had a special interest in historic homes. Prior to lending his talents to Historic Pewee Valley, he restored an 1843 residence near Taylorsville and painted 25 old homes in Spencer County.​
C. Don Ensor 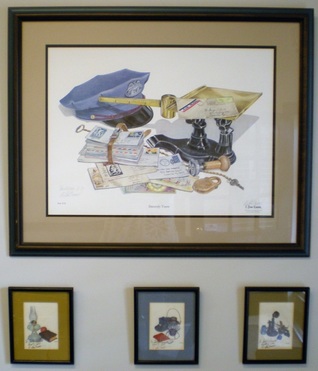 This large C. Don Ensor print, "Sincerely Yours," was donated to the city in 2016 by D.D. Hendrickson, who served as Pewee Valley Postmaster from 1983 to 2001. According to the information on the back of the print, the original painting was inspired by a 27-year post office employee in Louisville named John Underhill and a trip to the Irvington Post Office, which had been decorated with old artifacts to celebrate the U.S. Bicentennial.


The small signed Ensor prints below it were gifts of David and Donna Russell and were signed by the artist "To Sally Russell," David's mother.

​According to the "Hancock 29" booklet edited by Robert A. Powell in 1979, self-taught artist Don Ensor was born in Red Boling Springs, Tennessee, and moved to Louisville with his family at age two.

He worked eight years for an automotive manufacturer, then 15 as the manager of one of Louisville's oldest bakeries before devoting himself full-time to his art in 1972. He served as president of the Kentucky Heritage Artists in the mid-1970s.

In 1984, he opened the DONART Gallery in Pewee Valley at what is now the 314 Exchange.  He died in 1998 at the age of 71.
Jane Meyer
William J. Hirtzel
Joseph L. Williamson
Painted Embroidery 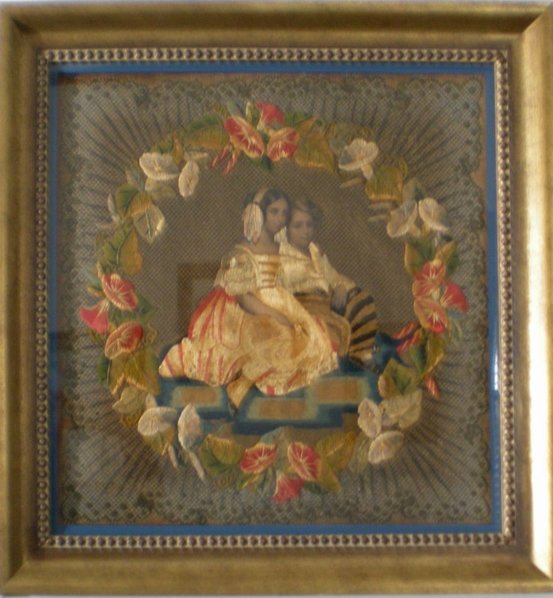 This handpainted embroidery was donated to the City of Pewee Valley by Charles and Alice Booker in 2017 in memory of Sarah "Adele" Smith Bolton (December 7, 1953-July 21, 2015).

Adele was descended from two of Pewee Valley's pioneer families: the Smiths and the Barbees. John Barbee (September 16, 1815 – December 22, 1888), who served as the tenth Mayor of Louisville, was raised near Pewee Valley at Cedarhurst. He was the son of James Barbee and Jane Sherrard Barbee and was elected as mayor on the Know-Nothing ticket. He died at the family's Pewee Valley homestead, within 10 feet from where he was born. Adele was his great-granddaughter.
Lydia Painter Allen 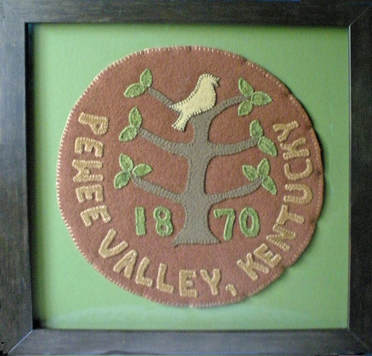 This felted wool rendition of the City of Pewee Valley's emblem was stitched by Lydia Painter Allen, who has lived in Edgewood Manor subdivision for more than two decades.  Originally created as a table mat early on in her career as a textile artist, Allen had the piece framed when she donated it to the Pewee Valley Historical Society in 2017.

Pewee Valley's city emblem dates from 1969, when the Pewee Valley Centennial Commission sponsored a contest to create a special emblem for the City's Centennial in 1970. Today, it adorns everything from the city's letterhead to the police chief's car. 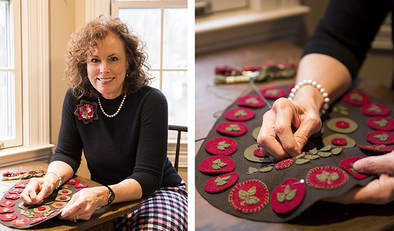 Among the distinguished group of craftspeople selected for listing in Early American Life Magazine’s Directory of Traditional American Crafts 2011-2017, Lydia Painter Allen is a textile artist  whose inspiration for wool art evolved from a love and appreciation for early American handwork. Her wool creations incorporate themes and patterns that symbolize peace and simplicity and give her art its name—Peace Works. Like the wool penny rugs from the early 19th Century, the works Allen creates use mostly recycled wool from clothing and blankets. New pieces of wool are blended with the old.
​Related Links
Town Hall
Town Square
Pewee Valley Museum