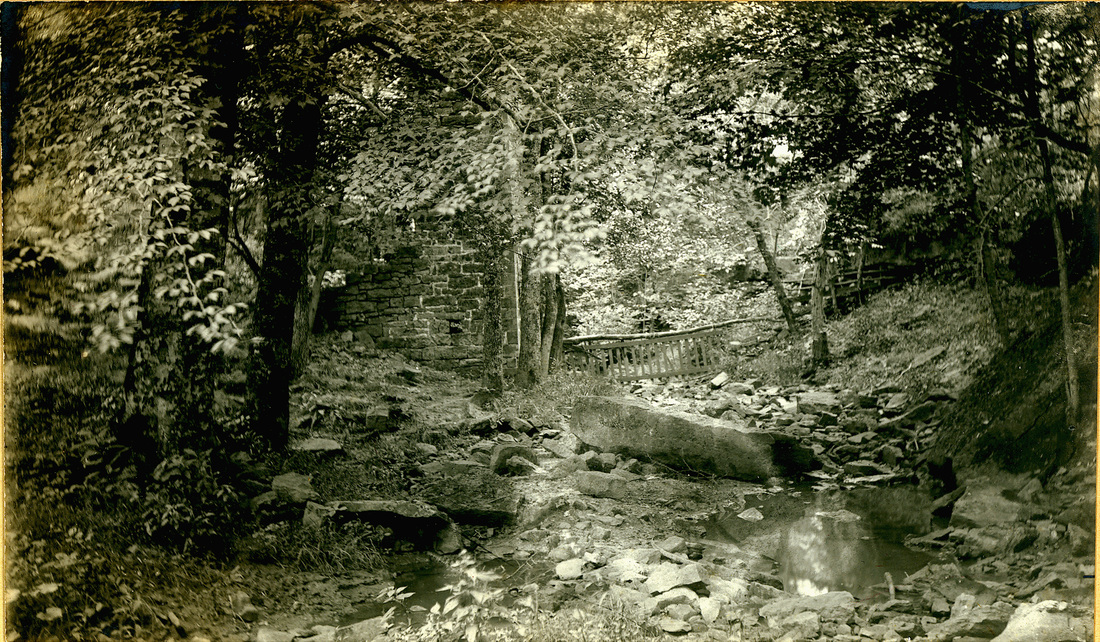 This Kate Matthews photograph of the Old Mill is from the Kate Matthews Collection, University of Louisville Photographic Archives at Ekstrom Library.
Pewee Valley photographer Kate Matthews, children’s author Annie Fellows Johnston and Louisville artist Carl C. Brenner all immortalized the “Old Mill,” once located at the end of what is now Old Mill Road, Matthews with her camera, Brenner with his brush and Johnston with her pen. The Kate Matthews Collection at the University of Louisville’s Ekstrom Library includes five pictures of the sagging stone structure, while Annie Fellows Johnston included a description of the crumbling mill in The Little Colonel’s House Party:

It was a devious way to the ruins of the old stone mill --- down unfrequented roads, through meadow gates and over a narrow pasture lot, then up a little hill and into a cool beech  woods, where the peace of the summer reigned unbroken. ..  The vacant windows of the old mill seemed staring in surprise at the gay party gathering on the hill above it, although it should have been accustomed to all kinds of picnics by this time, considering the number of generations it had watched come and go. Nobody could tell how long it had been since the mill wheel turned its last round and the miller ground his last grist, but if the stones could babble secrets like the little spring, trickling down the rocky bank, they would have had many an interesting tale to tell of all that had happened in their hearing.
​ 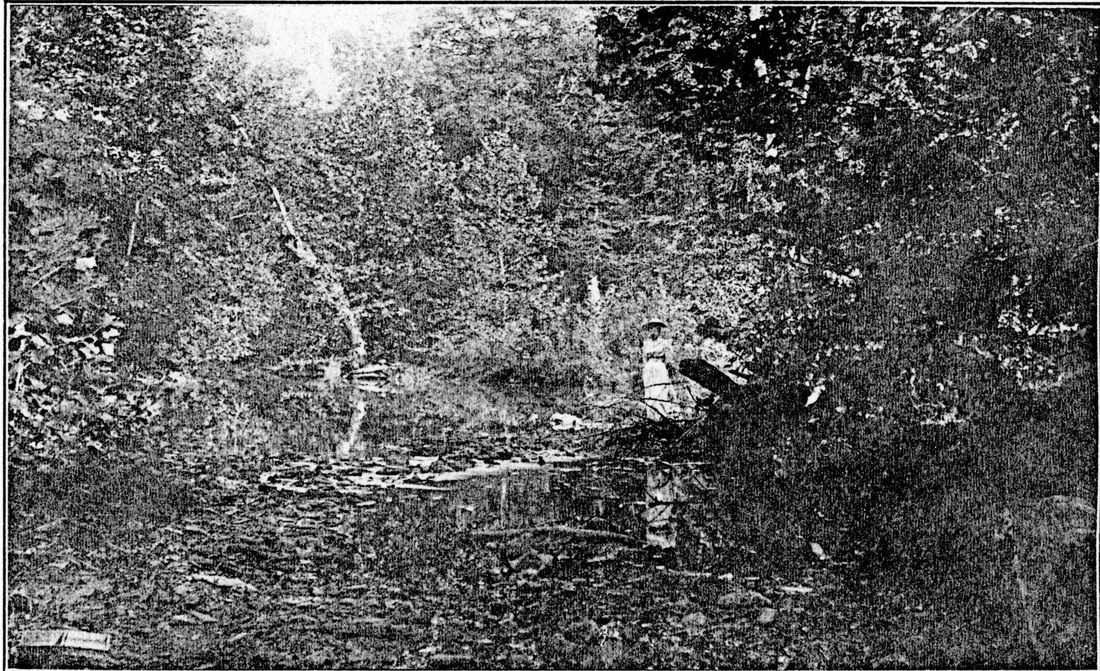 Scene near the "Old Mill" from "Beautiful Pewee Valley," published in 1909 by Powhatan Wooldridge and George R. Washburne
Brenner’s experience with the Old Mill was described by Philip Collingswood in an article titled, “Picturesque Pewee Valley,” that ran in the July 16, 1893 edition of the Courier-Journal:

…Over the hill, behind Pewee, is a quaint old hamlet called Rollington, about the only suburb the town can boast of. Here are the primitive cabins and humble houses of the early days. At the end of its one and only street is a gate; past this gate is a slope leading down to one of the most romantic glens ever poet dreamed over or painter put in colors. Across the stream on a neighboring hill is a simple farm-house where our greatest Kentucky painter, Carl C. Brenner, spent the most of the latter years of his life. Here are the majestic old beeches and the stately woodlands where he made his studies of life, which we have all lingered over with delight. It is indeed an artist’s country. Around the ruins of the old mill, with its moss-covered stones, down the glen where the little stream foams and frets over ragged stones, on the solemn stillness of the beechwood, there hangs a charm of beauty such as much have stirred the soul of a poet, and have been a revelation and inspiration from nature’s own heart. Here, too, stands the rustic old bench, fashioned by his own hands, where he used to sit wielding the magic of his brush, all a summer’s day…. 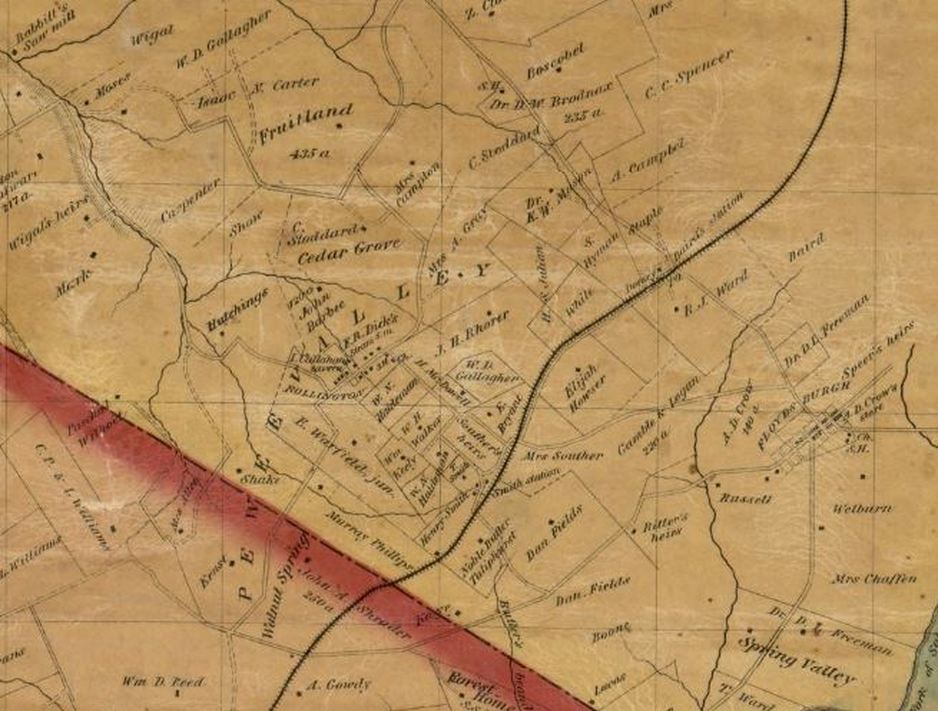 
​By 1900, when The Little Colonel’s House Party was published, the mill had been sitting astride that rocky bank at least 44 years. G.T. Bergmann’s 1858 map of Jefferson County, Kentucky shows F.R. Dick's Steam Saw Mill beside a stream, just inside the Oldham County line and near the Louisville - Brownsboro Pike (now Rollington Road in Pewee Valley). There’s evidence the mill was built before then and was originally owned and operated by Joseph Clore. A biographical sketch of Joseph Clore, written in 1886 by Edmund Starling, notes:

JOSEPH CLORE, the subject of this sketch, was born in Pewee Valley, Oldham County, Kentucky, on the tenth day of June, 1806…For a number of years Mr. Clore, in addition to farming, operated a saw mill at Pewee Valley. In 1856, in partnership with a Mr. Shrader, he built a large saw mill in Henderson, and in the fall of 1857 removed with his family to this place. A short time subsequent to his removal, he purchased Mr. Shrader’s interest and became the sole owner of the mill….

Before moving to Henderson, Ky., Joseph Clore ran a classified ad to sell his residence, 160-acre farm and saw-mill near Smith's Station in the July 28, 1856 Louisville Daily Courier. The ad noted the mill was operating and functioned as both a saw mill and a grist mill. 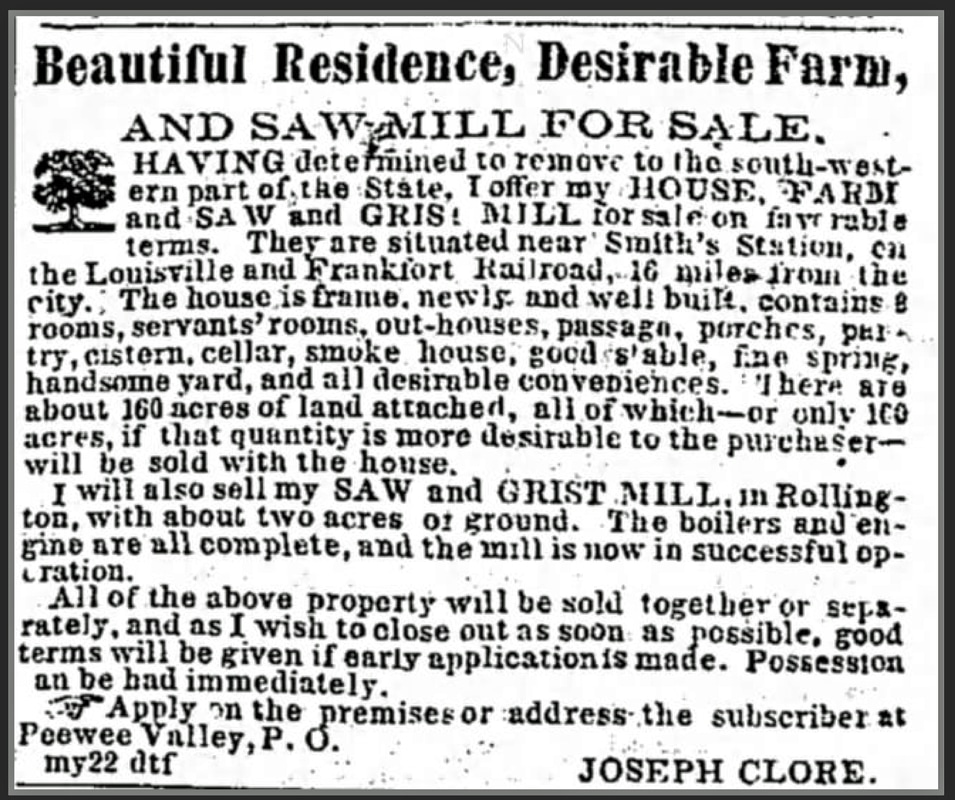 July 28, 1856 Louisville Daily Courier
The Old Mill was especially popular with Pewee Valley's summer visitors. This story from the August 23, 1896 Courier-Journal noted that a visit to the Old Mill was one of the activities provided to summer boarders at the Kentucky College for Young Ladies:

At Pewee Valley during the past week or two the young folks have been bidding defiance to the hot weather. In social gatherings and entertainments the Valley is keeping up its reputation of days gone by. A day or two ago Mr. Morris Gifford engineered a picnic to the Old Mill near the village, and a pleasant day was spent beneath the grand old beech trees made famous by the genius of Carl Brenner. On the evening of the next day a progressive euchre party was given at the Kentucky College by Mrs. H.N. Gifford (editor's note: Morris's mother) and Mrs. Will Clegg, and was a signal success. The next night a musicale was given at the college. And there are yet other picnics, entertainments and musicales to take place before the summer has ended.
​
On August 28, 1902, the Earlington Bee ran a story about its theft:

Stole a Saw Mill.
It is very seldom that a man is arrested charged with the theft of anything so bulky as a saw mill, says the Evening Post.  But this is the charge registered against John Gaddis, who was arrested Saturday evening by Detectives Moran and Altern and who is now held under a bond of $100 by Squire Keyer.

The saw mill in the story lay at Pewee Valley just inside the Jefferson county line and belonged to William Hughes of Pewee Valley, who sat present a member of the grand jury. Nothing but the boiler of the mill remains, the remainder having been taken away by the wagon load and, it is said, sold to Simon David, a dealer in old metals at 1229 East Market street. 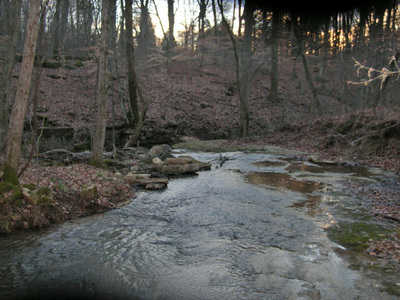 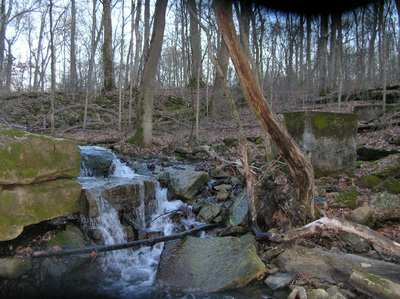 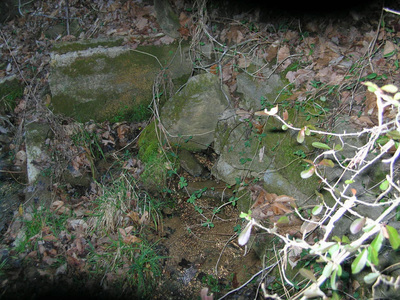 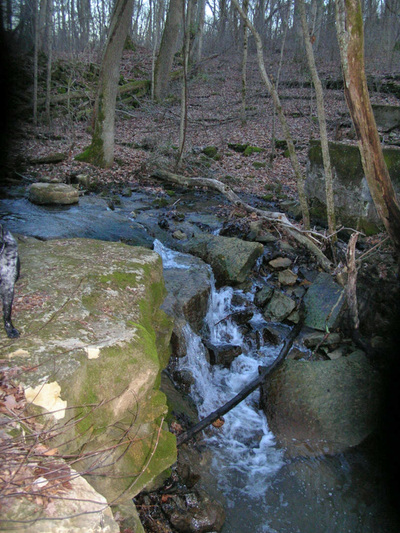 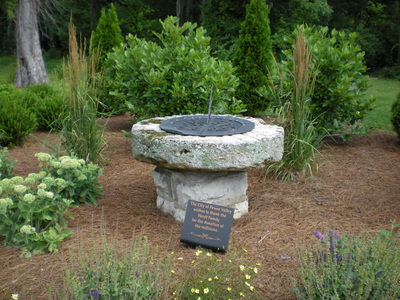 Piers and large stones are all that mark this once-popular Peweean picnic spot. The structure itself has washed away. But the millstone still survives. It was given to the City of Pewee Valley by siblings and life-time residents Bill Herdt, Louise “Sis” Marker and Virginia “Gin” Chaudoin in 2012, and is now on display in Central Park, near the fish pond and mural of the Old Mill.
​ 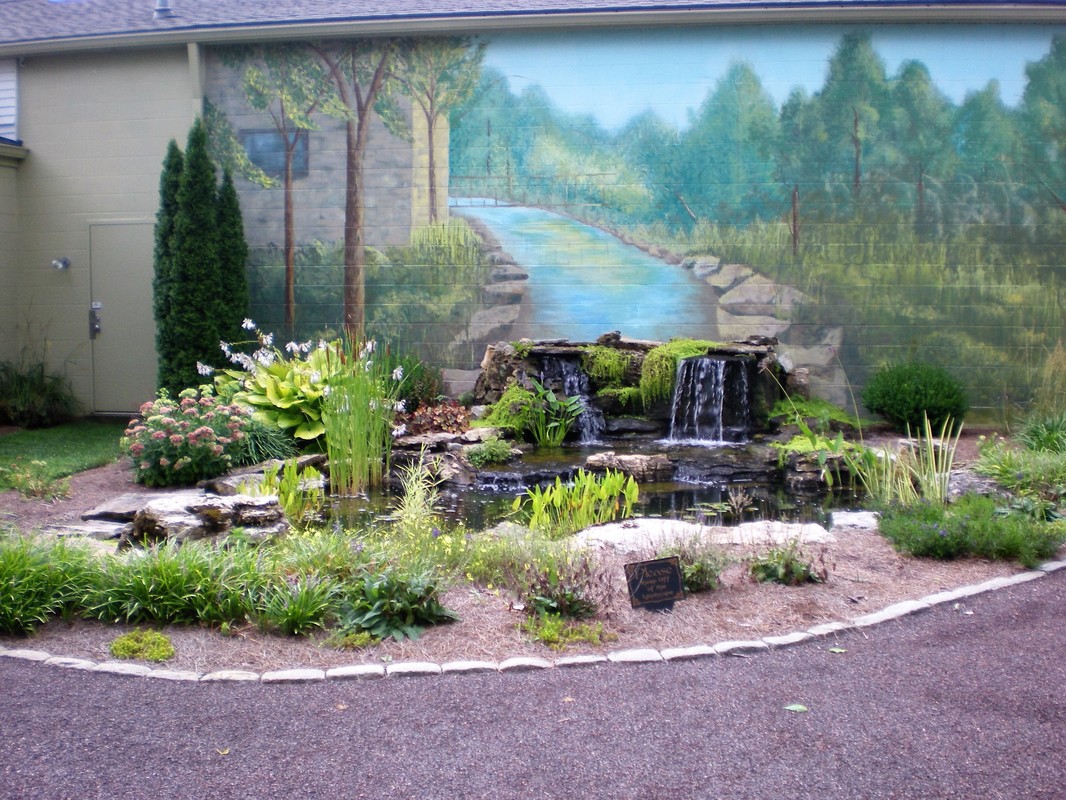 This mural of the Old Mill in Central Park was painted by Pewee Valley artist Carole Logan, assisted by Emily Mintman