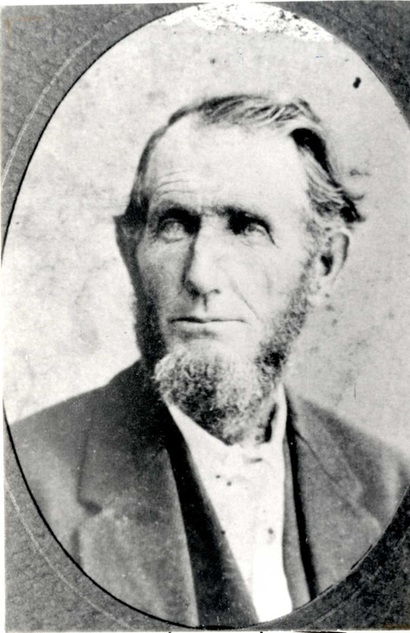 From "History & Families of Oldham County; The First Century 1824-1924" by the Oldham County Historical Society (Turner Publishing, Paducah, Ky., 1996)
​This profile of City Father Henry S. Smith was written by Pewee Valley's  first official historian, Katie Snyder Smith, who was married to Henry's great-grandson. The profile ran in a special Bicentennial Edition of the Oldham Era published in 1974:
​
Every man has a part to play and he is free to play it or not. Henry S. Smith chose to play his part to the fullest.

Michael and Roseanna Yager Smith, Henry's parents, migrated from Madison County (formerly a part of Culpepper County), Virginia to Jefferson County, Kentucky, in 1807 accompanied by eight children:  Ruth, age 14 was the oldest, then Daniel, Nathan, Roda, Reuben, Edward, Henry and William Hamilton, age 2. It is likely they were expected as the oldest son Daniel wrote, "We  moved to Kentucky,  about 12 miles above Louisville near the Ohio River, among our wealthy old acquaintances."  Several years later they moved to a farm in the Rollington section of Jefferson County.  "The light at night came from the fireplace so I prepared light wood to read by at night," wrote Daniel. Having been raised in families familiar with frontier life for two generations previously, Michael and Roseanna established a healthy home and bore three more children, Joseph, John Yager, and Jane. All 11 children lived to reach maturity. In the summer of 1819, Michael died. 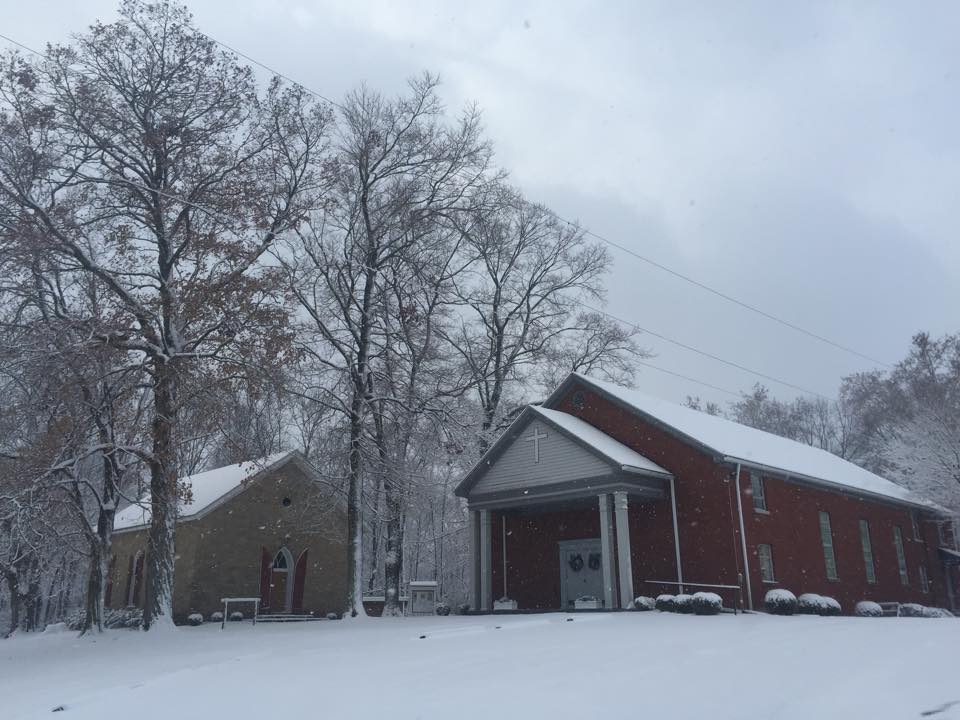 In 1836 Henry married Miss Susan Wilson of New York. They were active members of the Harrods' Creek Church.  Henry joined 10-16-1824. In 1829 when members of the statue were asked to form a constitution at Goose Creek, Henry and Susan were among those to go.

Henry and Susan had 3 children, Charles Franklin, William Alexander, and Sarah Emma ... Charles Franklin became the first Postmaster in Pewee Valley, Ky. in the year 1856. There has been a Post Office here ever since.

​ In 1836 Henry and Susan sold some of their property in Rollington and moved to  a farm  that ran from what is now Central Avenue to Huston/Houston Lane. With the advent of the Louisville and Frankfort Railroad according to the Stockholders Report June 3, 1850 by President Thomas Smith of New Castle, "The road has been in use to LaGrange since Jan. 1, 1850. "  ...

... The land between the Railroad and Rollington was much in demand for homes.
Homes & Businesses Built on Henry Smith Property North of LaGrange Road 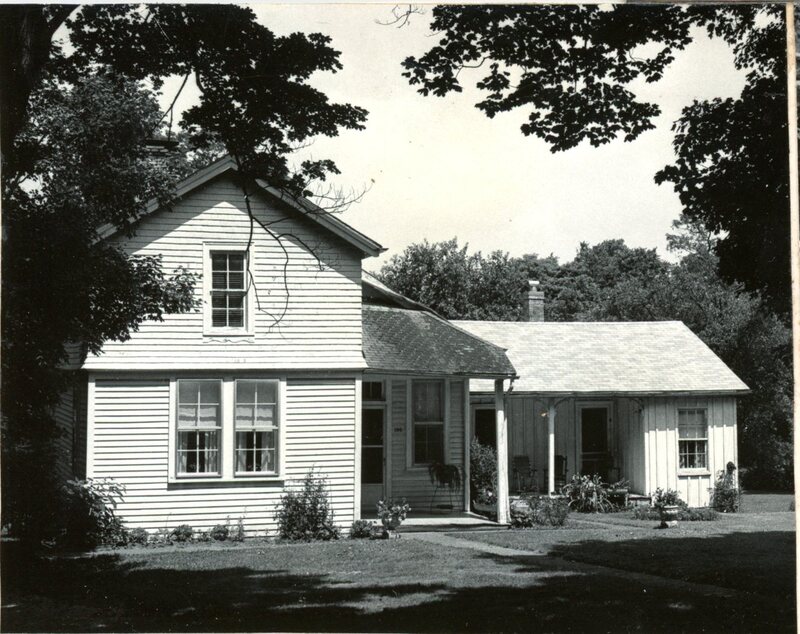 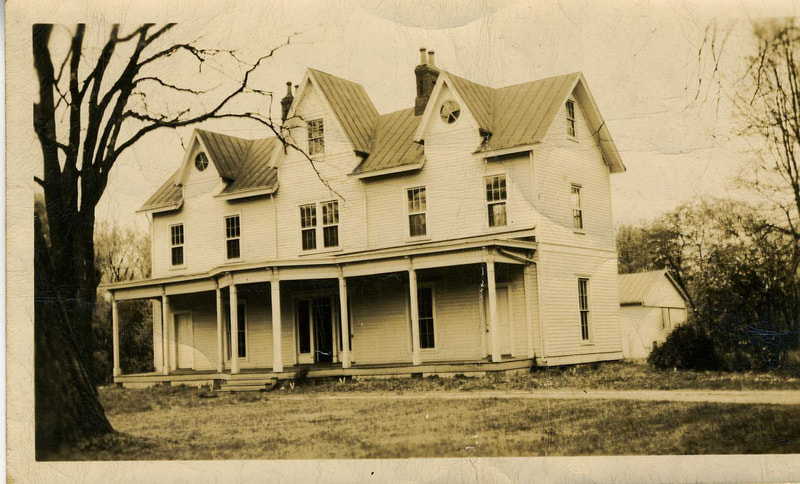 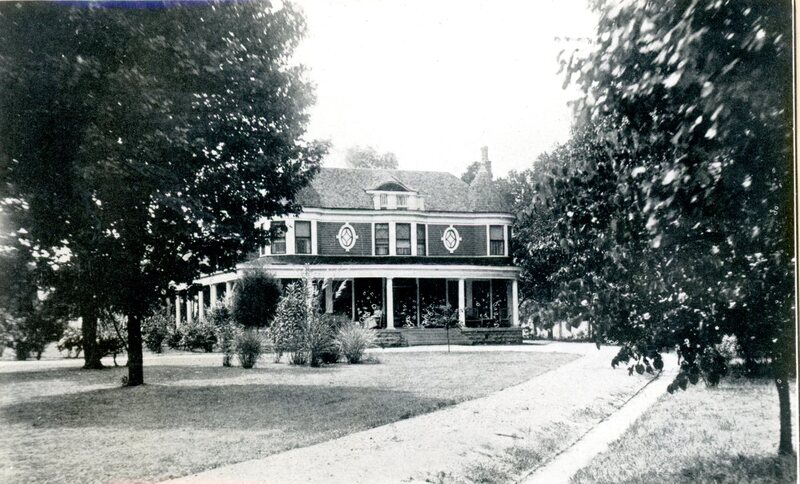 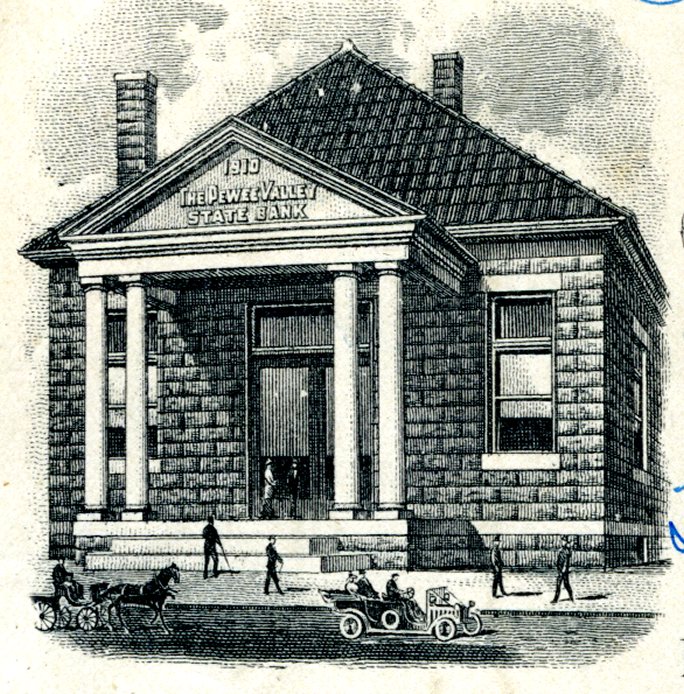 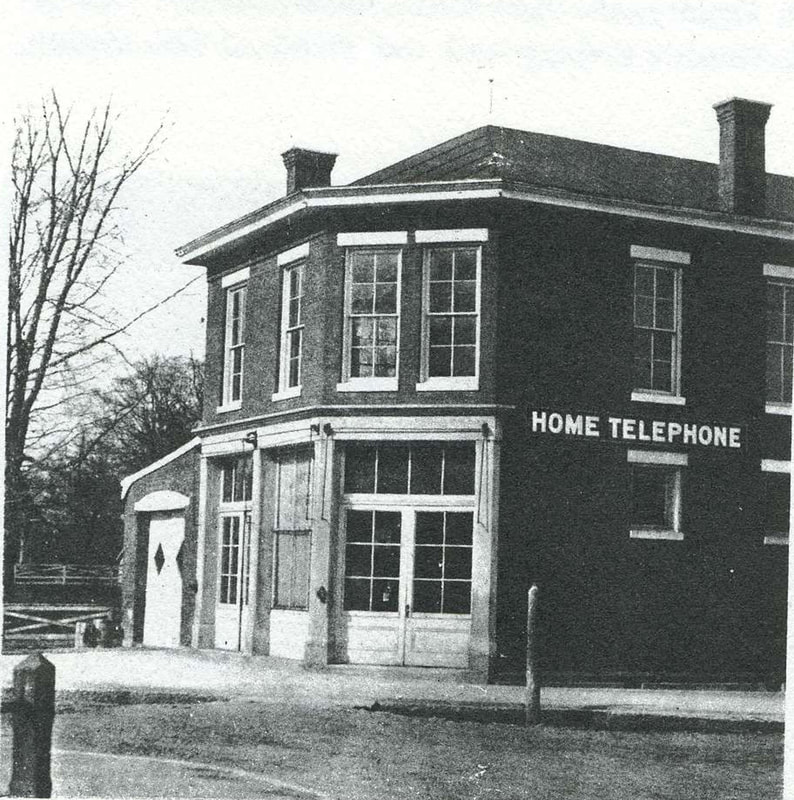 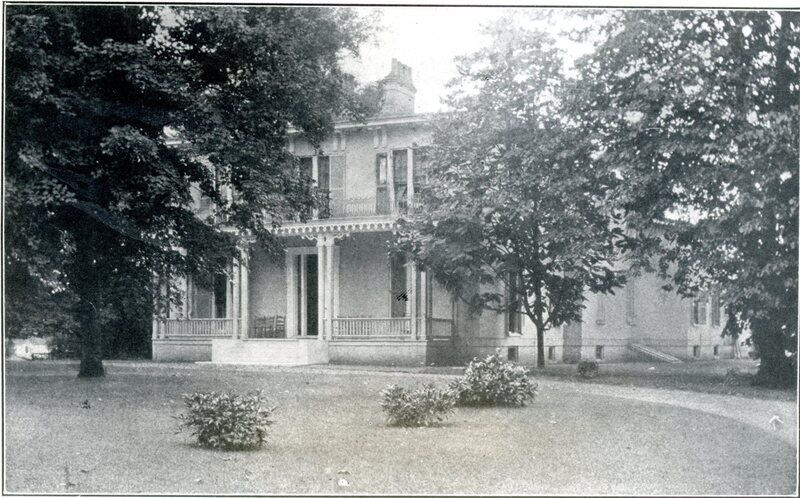 In 1856, Henry and Susan sold an acre on Huston/Houston Lane to the L&F R.R. for a section house. Later that year Thomas A. Marshall, Trustee for Nanette B. Smith, bought 8 acres from Henry and Susan for Mrs. Smith, the wife of Thomas Smith, no relation to the Henry Smith family. (Editor's note: this is the property associated with Woodside, now owned by St. Aloysius Catholic Church, and Bemersyde, which remains a private residence.) ... In 1858, Mr. Marshall purchased 3 more acres from Henry and Susan to add to Mrs. Smith's acreage. (Editor's note:  This is where the Pewee Valley Woman's Club and Woodruff-Foley Brothers store is located today.) ...  Also in 1858 Henry and Susan sold 11 3/8 acres to James A. and Mary Miller (Editor's note: now the site of Mt. Mercy Place subdivision, but formerly the site of a private home and then of the Mt. Mercy Camp & Boarding School) ... In 1861 William Alexander, who had married Miss Mary Compton, needed a larger home for his family (ultimately 8 children) and bought 8 acres from his parents, Henry and Susan. (Editor's note:  The William A. Smith House is still standing on three of its original eight acres on Mt Mercy Drive.) ... That same year Henry and Susan sold 21 acres to Walter Haldeman (Editor's note: present day site of Edgewood Manor subdivision, where his brick Italianate home is still standing.   Our records indicate that Haldeman actually purchased the property in 1854, that it contained 50 acres, and that he left Pewee Valley in 1861, when his home was confiscated by Union forces due to his newspaper's pro-Confederate editorial stance.) ... 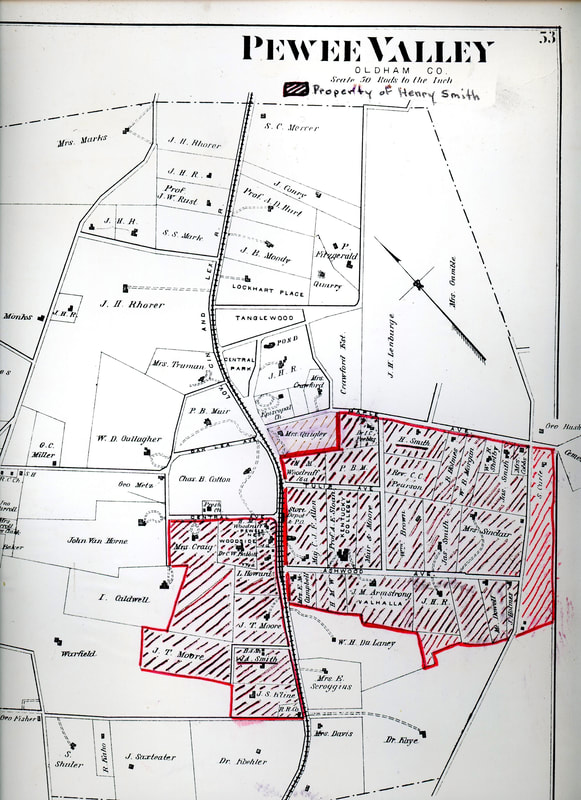 The new Railroad Depot was opened in 1867 and with each new arrival a town began to take shape.  Pewee Valley was incorporated by an Act of the Legislature in March, 1870 and the men responsible were appointed as the Town's First Board of Trustees.  Henry Smith was one of these men, according to the minutes of the Town of Pewee Valley, Book 1, page 1 April 16, 1870.
​
Among the original buildings located on Smith's holdings south of LaGrange Road were Clovercroft,  Willow Glen, which later became the Kentucky College for Young Ladies, and Pewee Valley First Baptist Church. Unfortunately, each  of these architectural gems was destroyed by fire  -- Clovercroft on June 19, 1960; the Kentucky College on August 28, 1900; and the First Baptist Church on August 17, 2003.
Original Buildings on Henry Smith's Property South of LaGrange Road 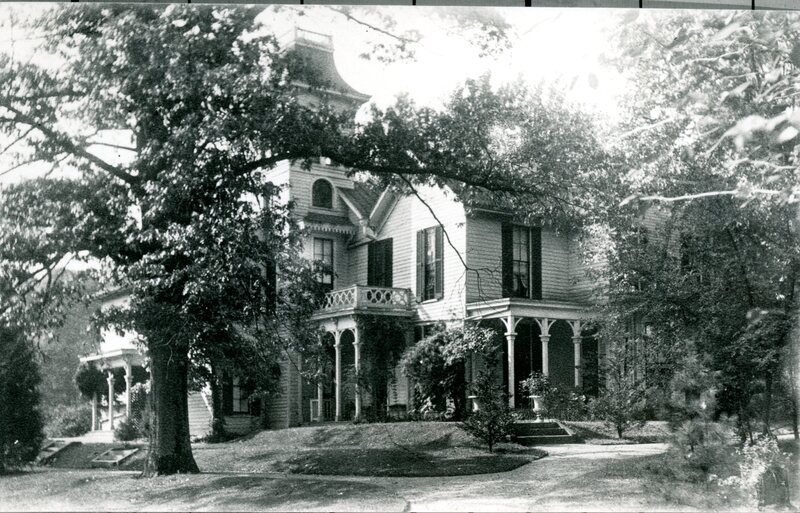 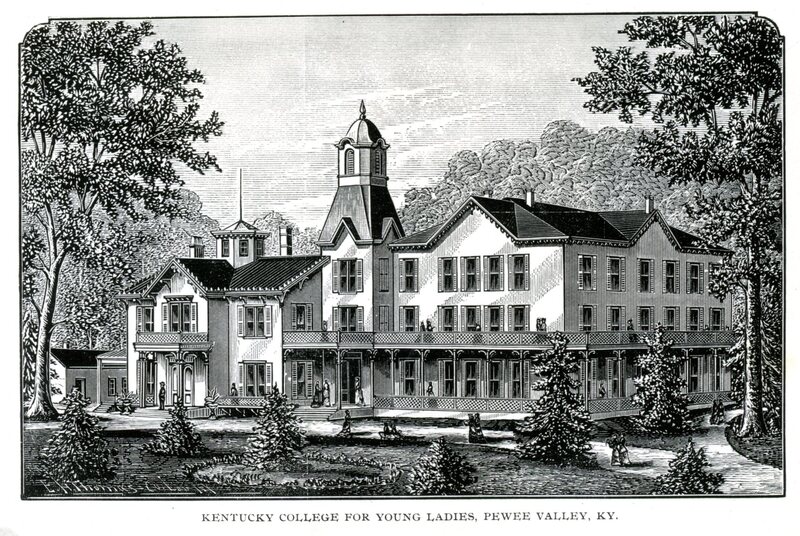 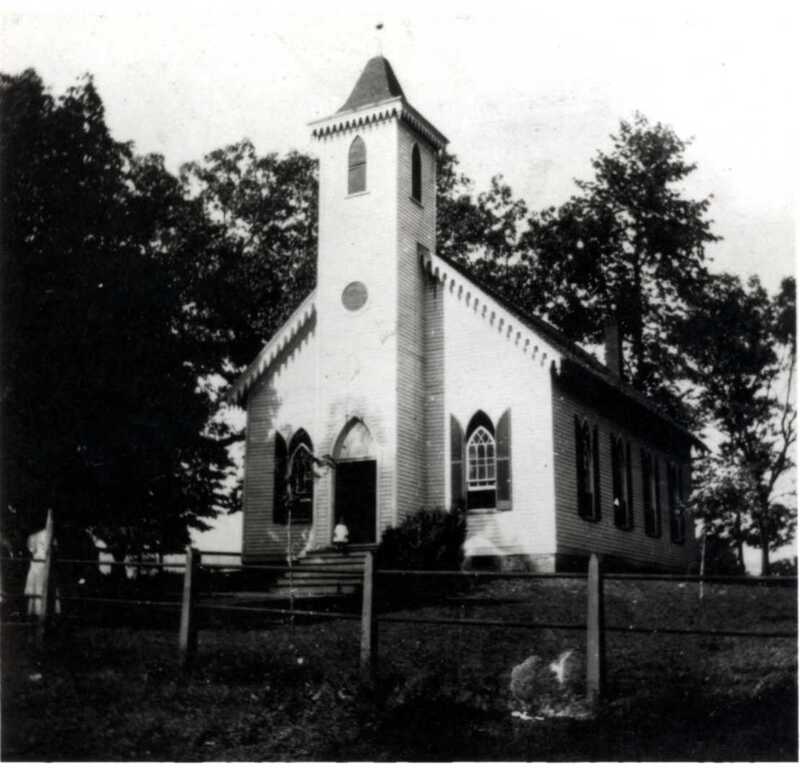 In 1871, Henry Smith worked with landscaper Stephen Schuler and a group of local citizens on development of the Pewee Valley Cemetery, which was incorporated by the State Legislature the following year.  Henry S. Smith’s wife, Susan, died on Aug. 26, 1871, and is the first known person to have been buried in the public cemetery. Smith died on March 18, 1883, and is buried beside her. ​
​
Henry Smith in the U.S. Census 1850-1880
1850 United States Federal Census