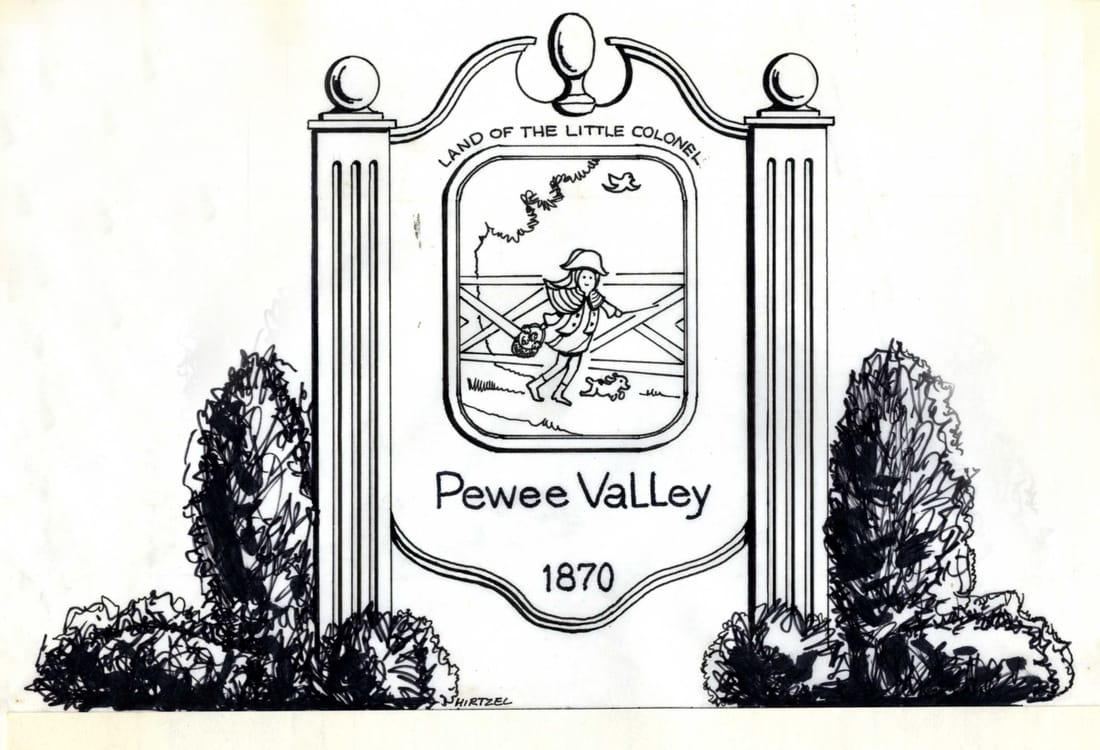 The wooden signs on LaGrange Road/Hwy. 146 that mark Pewee Valley's boundaries proclaim Pewee Valley as "Land of the Little Colonel." That nickname derives from the title of author Annie Fellows Johnston's autobiography, published in 1929 and written while she was living at The Beeches. Thanks to an anonymous donor and Peweean John Morgan, the Pewee Valley Museum has original copies of all but three of Johnston's works in our collection. 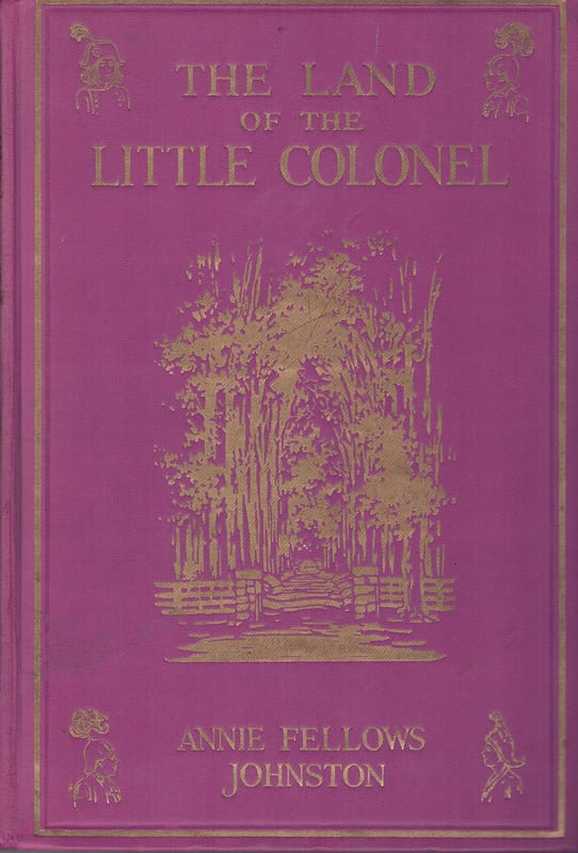 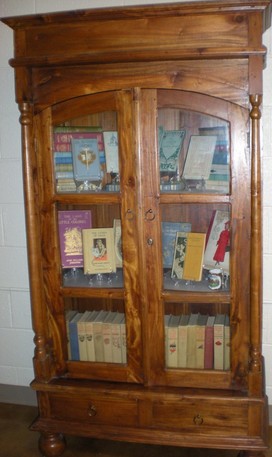 The works of Annie Fellows Johnston at the Pewee Valley Museum
Popular author Annie Fellows Johnston made Pewee Valley the "Land of the Little Colonel" with her best-selling children's book series. The Indiana native published the first volume, "The Little Colonel," in 1895, after visiting relatives in Pewee Valley. Seventeen years later, she completed the series with the publication of "Mary Ware's Promised Land" in 1912. By then, she was living in The Beeches, which still stands today on Central Avenue.

Like many writers, she drew inspiration from her own life experiences. Many of the characters and settings for the early books in the "Little Colonel" series were largely based on real people, places and events in Pewee Valley. In some instances, such as Edgewood,  The Beeches, and The Locust, she referred to places by their real names. In others, she used pseudonyms, turning Pewee Valley into Lloydsboro Valley and the Kentucky College for Young Ladies into Lloydsboro Seminary.

As the series progressed, the books incorporated people and places from Annie's travels with her stepson John, who suffered from tuberculosis. Before the discovery of antibiotics, very few treatments were available for the "white plague." Doctors generally prescribed rest and fresh air, and TB sanitariums and tent communities sprang up across America. Annie, her stepdaugher Mary, and John spent time in California and Arizona, before settling in Boerne, Texas, where the hospitable hill country climate attracted many "lungers." It wasn't until after John's 1910 death that she made Pewee Valley her home.
​ 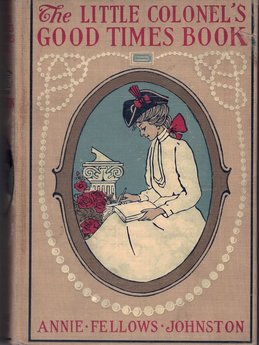 The series eventually included a dozen volumes, a children's diary called "The Good Times Book" and two paper doll books, one for the Little Colonel and one for Mary Ware. It was a publishing phenomenon the likes of which few children's authors have ever achieved. Millions of books were sold and the stories were eventually translated into over 40 languages, including Japanese and Braille.

In 1906, Annie's publisher, the L.C. Page & Company, published a series of official Little Colonel postcards featuring photos of some of the real people and places that inspired the characters and settings in the books. Many of those photos were taken by Pewee Valley photographer Kate Matthews, who became a character in the stories as well. 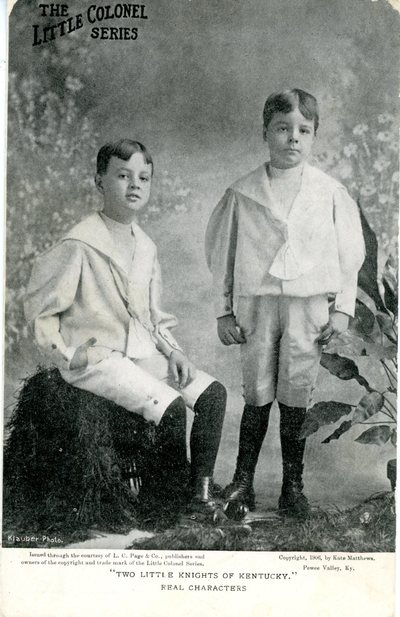 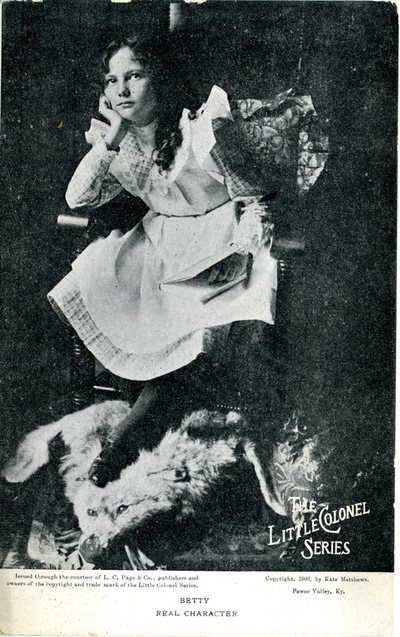 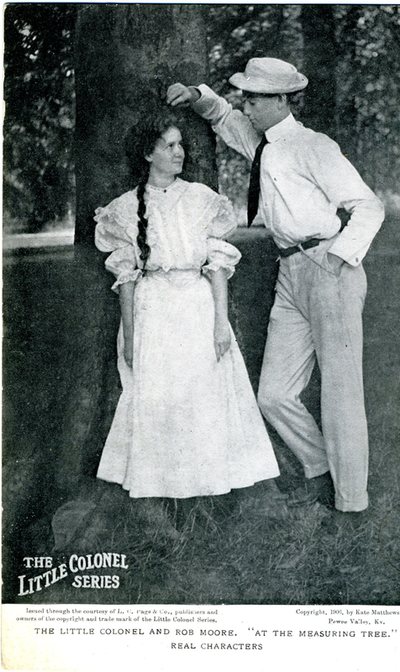 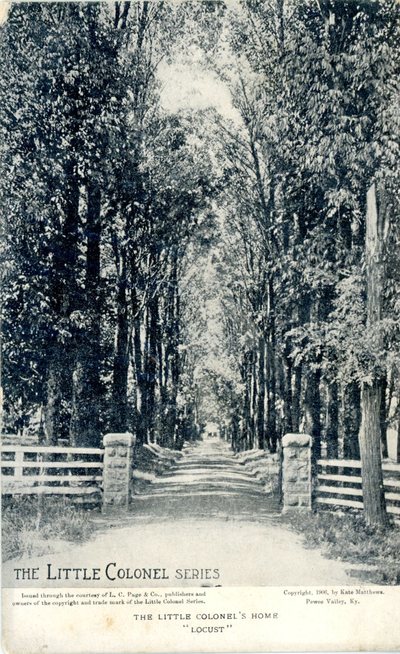 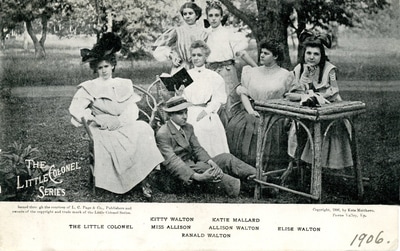 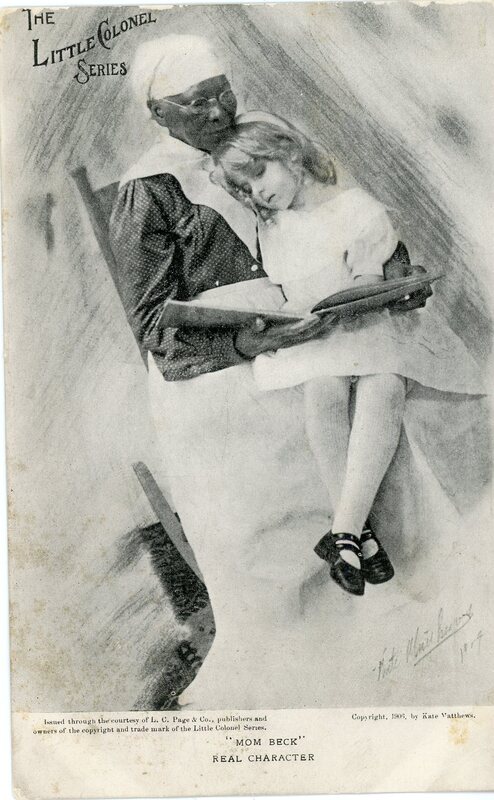 The Impact of the "Little Colonel" Movie 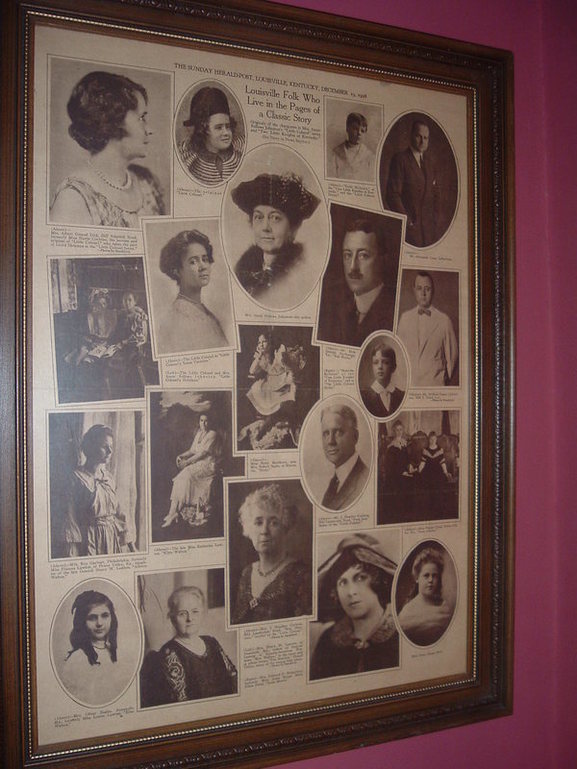 Framed Herald-Post story hanging at the Samuel Culbertson Mansion in downtown Louisville showing photos of some of the Peweeans who served as models for characters in the Little Colonel stories.
The books and movie turned Pewee Valley into a tourist attraction for many years before and after Annie's death. Adele Brandeis, in a 1952 Courier-Journal & Times Sunday Magazine article called "The Little Colonel Marches On," wrote about the plethora of  pilgrims who stopped to see The Beeches -- at the time still owned by Annie's stepdaughter Mary Johnston -- and other places in Pewee Valley:

...If you think The Little Colonel and her friends have been forgotten in these many years, you should visit Pewee Valley as hundreds of others do yearly...

...If Miss Johnston took everyone upstairs who came to the Beeches (editor's note: to see Annie Fellows Johnston's writing office), the stairs would have worn out a generation ago. And people are still coming. They are young and old, they come before breakfast and after supper. They are "just driving through," as two middle-aged couples told me when I met them there on their way from Florida to Providence, R.I., "a little out of the way, but when we realized we were within a few hundred miles, we had to detour."

Visitors come from every state in the Union, from Minneapolis to enjoy the "dream of a lifetime," and from Chicago, an Army officer, who had read the books while stationed in Alaska...

...They come from Edinburgh, Ind., and from far-off Connecticut (the curator of the rare book department of Yale University Library, anxious to visit the "one place I must see in Kentucky -- Pewee Valley.") They come out from Louisville and from Iran. There were a missionary from Africa, and a lady from the valley of the Thames, who said, "All just as she described it, you know."

...Mr. and Mrs. Carl Martin, who bought the Locust in 1941 when it was sadly in need of repair and have brought it, both inside and out, to what it was in The Little Colonel's youth, also have quantities of visitors. Their guest book right up to the present has names of persons from Hawaii, Australia, Hollywood, Boston, Ontario and Texas...
Even today, more than a century after the first book's debut, the Pewee Valley Historical Society still receives occasional requests for tours from "Little Colonel" fans and scholars.
​
To learn more about the real people and real places Annie Fellows Johnston wrote about in the "Little Colonel" stories, visit our sister website, littlecolonel.com. The site also includes a complete listing and descriptions of all the books and special editions in the "Little Colonel" series. Many of them are out of copyright and are available to read online on the website.
Other Works by Annie Fellows Johnston at the Museum
​Included in the museum's collection are other books Annie wrote before, during and after she started the "Little Colonel" series.  They include:
Asa Holmes or At the Cross Roads

First copyrighted in 1900, "Asa Holmes or At the Cross Roads" takes a look at the lessons to be learned at any small town crossroads store during every season of the year. The main character in the book is Asa Holmes, an 85-year-old retired miller and fireside philosopher.

Published in August 1902, "Aunt 'Liza's Hero" is a compilation of six short stories Annie Fellows Johnston had originally written for the Youth's Companion magazine. In addition to the title story, the book includes: The Captain's Celebration, ​Jode's Circus Money, Jimmy's Errand, Washington's Birthday at Hardyville and An Old Daguerreotype.

First published in 1893 before Annie Fellows Johnston had become a hot commodity in children's literature, "Big Brother" is the story of two boys. The devotion and care of Steven, himself a small boy, for his baby brother, is the theme of the simple tale.
​
​Read it online.
Cicely and Other Stories

"Cicely and Other Stories" was first published in 1901 by the Perry Mason Company.  L.C. Page & Co. brought out the Cosy Corner edition in May 1902. The book is a compendium of five short stories originally published in Youth's Companion and Forward magazines: Cicely, Alida's Homeliness, The Hand of Douglas, Elsie's "Palmistry Evening," and Their Ancestral Latchstring. The Pewee Valley Museum's copy was donated by avid Annie Fellows Johnston collector John Morgan.

Annie Fellows Johnston originally wrote "Flip's 'Islands of Providence'" for the Trustees of the Presbyterian Board of Publication and Sabbath-School Work, which published it in 1902. The book was picked up by L.C. Page and Co. and republished as part of their Cosy Corner series in 1903. The museum's copy was donated by John Morgan.

​Read it online.
For Pierre's Sake

"For Pierre's Sake" was a posthumous collection of Annie Fellows Johnston's short stories that were in the works when she died in 1931. It was published by L.C. Page and Co. in 1934. Unfortunately, the book is still under copyright protection and isn't available yet to read online.
Georgina of the Rainbows and Georgina's Service Stars
It Was the Road to Jericho

In "It Was the Road to Jericho," Annie Fellows Johnston tells the story of the Good Samaritan. The book was copyrighted in 1919, while Annie was living at The Beeches and was illustrated by John R. Neill. It was published by the Britton Publishing Co. in New York. The museum's copy was donated by John Morgan.

​Read it on line.
Joel: A Boy of Galilee

Originally published in 1895 -- the same year as the first volume in the "Little Colonel" series, "Joel: A Boy of Galileee" is set in Galilee at the time of Christ and provides glimpses of private and public customs among first-century Jews. The story revolves around a crippled boy who lives among shepherds and fisherman and witnesses first-hand the miracles, death and resurrection of Jesus. ​
​
​Read it on line.
Mildred's Inheritance

Published in 1906, "Mildred's Inheritance" is a compilation of three short stories that includes Mildred's Inheritence, the story of a lonely English girl who comes to America and is befriended by a sympathetic American family who are attracted by her beautiful sparkling voice; Just Her Way; and Ann's Own Way. The stories were originally written for the Trustees of the Presbyterian Board of Publication.

​Read it online.
Miss Santa Claus of the Pullman

Published in 1913 and written while Annie Fellows Johnston was living in Pewee Valley at The Beeches, “Miss Santa Claus of the Pullman” was described in the November 22, 1913 Publishers Weekly as follows:
​
A story of two adorable children, with the Christmas spirit on every page. Will'm and Libby, two motherless little ones, go quite wild when they first hear of Santa Claus, and send him a letter—Libby asking for a ring, Will’m for a ride on a Pullman. Just before Christmas the children learn that they have a new mother and are to leave Grandma West to go to her and their father. The stories they have heard of " stepmothers" make them unhappy, and they start off miserably on the Pullman on an all-day journey home. But they meet a charming girl, gay in red coat, and holly, who gives them such a happy time that they recognize her for Miss Santa Claus. She comforts them with a new idea of stepmothers, tells them a beautiful fairy story about love and obedience, and fills their stockings with gifts. And in the morning the children wake to find their new mother a very real and tender mother. Some of the very best of the story is of the days that follow.

​Read it online.
The Quilt That Jack Built

First published in 1904, "The Quilt That Jack Built" is composed of two short stories: The Quilt That Jack Built and How He Won the Bicycle. Both feature young boys learning virtues and values that will make them better men and help them achieve success in their future careers and in life.
​
​Read it online.
Travellers Five Along Life's Highway

Annie Fellows Johnston originally published "Travellers Five Along Life's Highway" in short stories for the S.S. McClure Company (McClure's Magazine) starting in 1899. However, it was not until 1911 that her publisher L.C. Page and Company, brought the compilation out in book form. The travellers include Jimmy on the trail of the Wise Men; Gid Wiggan in the wake of a honeymoon; the Clown towards his accolade; Wexley Snathers by way of an inherited circus; and Bap. Sloan to his Mount of Pisgah. The five stories were previously copyrighted in 1899, 1901 and  1903. ​​
​
​Read it online.
The Pewee Valley Museum's collection is currently missing vintage copies of only three books by Annie Fellows Johnston:
Related Links:
Annie Fellows Johnston
The Beeches
Beeches State Historical Marker
Annie Fellows Johnston: What Was Real?
The Little Colonel Website: The Books
Pewee Valley Museum