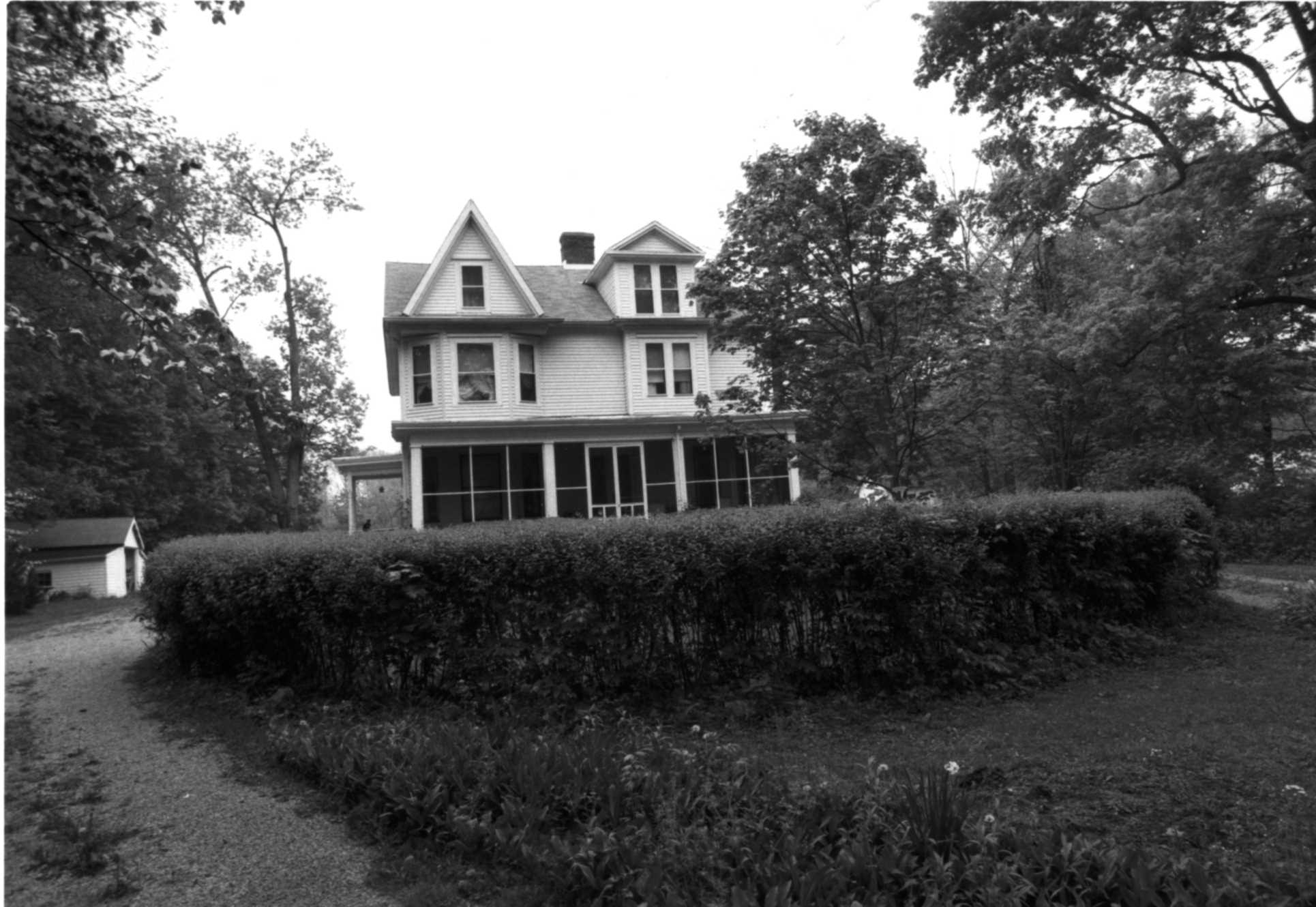 The Sherman & Corey Jurey Weatherly house at 111 Ash Avenue ca. 1991 from "Historic Pewee Valley," published by Historic Pewee Valley, Inc. in 1991.
The Sherman and Corey Jurey Weatherly House was built ca. 1905 on property that was once a part of the Kentucky College for Young Ladies campus. The Weatherlys lived there from the time it was built until 1928.
​ 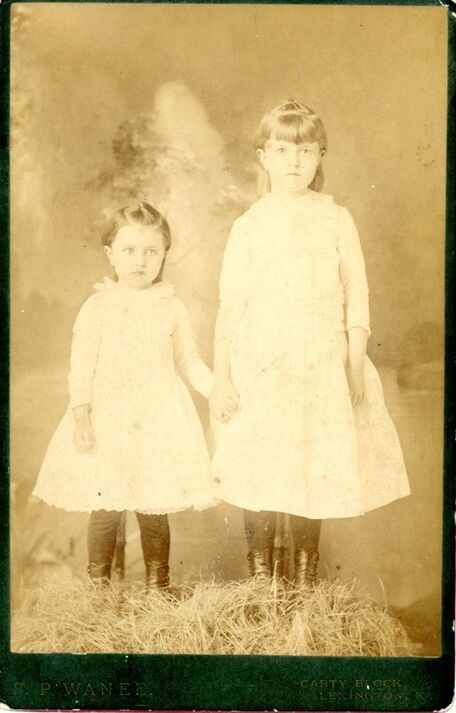 This 1903 photo shows Corey Jurey as a child (left) with her older sister Minnie. Courtesy of Donna Russell.
Code May "Corey" Jurey was the daughter of William N. Jurey, a railroad agent who owned the mercantile that now houses the Little Colonel Playhouse, and Corey Peterson, William's first wife. She was born on November 30, 1882 while her parents were living in Paynes Depot, a small town in Scott County, Ky., where her father was working as a depot agent. ​
​

Her engagement to Sherman Weatherly was announced in the October 15, 1903 Courier-Journal:

Mr. and Mrs. W.N. Jurey, of Pewee Valley, have announced the engagement of their daughter, Miss Code May Jurey, to Mr. Sherman Weatherly, of Louisville ... Mrs. N. Harvey Ingles, of Middlesboro, sister of Miss Jurey, will be matron of honor, and Miss Marguerite Jurey ringbearer. Mr. Will Bowman, of Louisville, will be best man.

​The wedding, held December 2, 1903, was front page news in the next day's Earlington Bee:

​Pewee Valley, Ky., Nov. 29 -- The principle event of the winter will be the marriage of Miss Code Jurey to Mr. Sherman Weatherly at 7:30 o'clock next Wednesday evening at the Presbyterian Church. Rev. C.M. Creighton will perform the ceremony. The attendants will be four ushers, Mssrs. H. Louis Armstrong,  Frank Sutton, Will F. Hinkle and Will T. Micou (editor's note: Micou was Cora Jurey's cousin and clerked at her father's store for a time before becoming an insurance agent); the flower children, Miss Lucille Jurey and Master William Mack Ingles; the ring bearer, Miss Margaret (sic) Jurey; the matron of honor, Mrs. H.M. Harvey Ingles; and the best man, Mr. Will Bowman. Miss Mayme Hinkle will sing and Mrs. Claude Allen will preside at the organ. The church will be prettily decorated with ferns, palms and white chrysanthemums. Miss Jurey will wear a gown of white crepe de chine and chiffon over white taffeta and the customary tulle veil, and will carry white chrysanthemums. Mr. and Mrs. Weatherly will leave soon after for a trip South. On their return they will make Louisville their home.
​

Mr. Weatherly spent his boyhood at Madisonville, where now live his three sisters, Mesdames T.W. Gardiner and Jno. B. Harvey and Miss Nellie Weatherly. His first connection with railroading was as a boy when his sister, now Mrs. Gardiner, took him to Evansville and enlisted the interests of Capt. Lee Howard, general freight agent of the L&N, in her brother. He was given work hustling freight at the depot, but the work was too heavy and laid him out. Capt. Howell then made him office boy until he could develop his shorthand and typewriting to the point of efficiency. He was stenographer to Capt. Howell's chief clerk for several years. Afterwards he went with Mr. J.G. Metcalfe when that gentleman was superintendent of  the Henderson and St. Louis divisions. Later he went to Birmingham as chief clerk to  Mr. C.B. Compton, then general agent for the L&N at that place. When Mr. Metcalfe became general manager, Mr. Weatherly went with him again for several years. Then, upon advice of influential friends, he went into the transportation department, where he has remained. He is now chief clerk to Mr. C.B. Phelps, superintendent of transportation, and is regarded as a bright railroad man and a hard worker.

Mr. Weatherly will bring his wife to Madisonville for a visit with his sisters before the bridal trip is ended.
The honeymoon included a stay in New Orleans, according to the December 5, 1903 Courier-Journal:

New Orleans, La., Dec. 4. -- (Special.) -- Prominent among the Kentucky railroad officials visiting here were Traffic Director C.B. Compton, of the Louisville and Nashville, with headquarters at Louisville, and Sherman Weatherly, chief clerk in the office of the Superintendent of Transportation of the same line at Louisville. The former comes here on a short business trip combined with pleasure. He was accompanied by F.C. Shepard, general freight agent at Montgomery, Ala., of the L. and N. system. Mr. Weatherly arrived with his bride, and is completing an extended bridal tour. Mrs. Weatherly was formerly Miss Cody Jury, of Louisville, and was married December 2.​
​
Sherman Weatherly's rise at the L&N railroad started receiving press attention thirteen years before his wedding, when his promotion to J.G. Metcalfe's Chief Clerk was announced in the November 18, 1890 Courier-Journal. His ​earlier association with Charles B. Compton is of interest. C.B. Compton was raised in Pewee Valley by William and Nannette Schuler Compton and later became one of the directors of the Pewee Valley State Bank.
​

1907 property owner map of Pewee Valley showing Ashwood Avenue from the railroad tracks to Elm
In 1904, Sherman Weatherly paid $1,200 to E.W. and Maria L. Mitchell for the the 3.5-acre site where he built his home. It was located across Ashwood Avenue from Corey's parents' home and nestled between the homes of two inspirations for characters in Annie Fellows Johnston's "Little Colonel" series: the Matthews family of Clovercroft; and the E.B. Malones, whose daughter Katie was the inspiration for the Little Colonel's friend Katie Mallard in the stories.

​Unfortunately, the curse of Thomas Howell Crawford's Willow Glen and the Kentucky College for Young Ladies lingered on the property. Just a year after it was built, the Weatherly house burned to the ground. The August 24, 1905 Courier-Journal reported:

Fire, which originated in the roof from some unknown cause, destroyed the two-story frame residence on Ashwood avenue, in Pewee Valley, owned and occupied by Sherman Weatherly yesterday afternoon. The fire prevented Mrs. Weatherly from starting on a contemplated trip to Viriginia, where she was expected to spend several weeks. She was at the depot checking her baggage, when she was informed of the fire. She immediately went back to the house to find it wrapped in flames and her furniture in the yard.

The building was an eight-room frame house, which has been built only a year. The fire was discovered about 5 o'clock by neighbors, who saw flames and smoke coming out of the roof. They gave the alarm and almost the whole population of Pewee Valley gathered in a short time. Every effort was made to save the place but nothing could be done. The furniture in the house was carried out, however, and almost all the contents of the building were saved. The loss on the building, which was total, will amount to $3,500, with $2,000 insurance. The furniture was also insured for $2,000. Mr. Weatherly is chief clerk to C.B. Phelps, superintendent of transportation for the Louisville and Nashville railroad.
​ 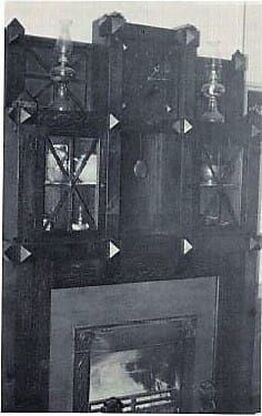 Mission-style mantle in the Weatherly House, from the July 1975 Call of the Pewee
The Weatherlys rebuilt and created a twin of the Malone home, which was under construction next door. According to the National Register of Historic Places nomination submitted in 1989, the house is:

​A large rectangular plan two-and-a-half story.. with Colonial Revival styling...Despite (new aluminum siding on the front) and the screened-in porch, the elaborately detailed house retains much of its original character. The interior has a very fine mission style mantle with a built-in clock and side cupboards in the dining room.

​​Two children were born to the Weatherlys during their years in Pewee Valley: 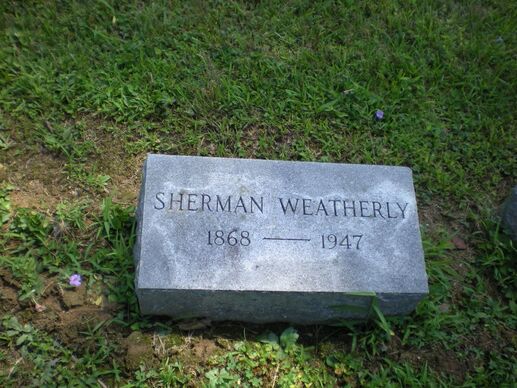 By the 1930 census, the Weatherly family was living in Louisville at 381 S. Peterson Avenue in a home valued at $65. Sherman was still employed by the L&N Railroad, but as superintendent of perishable freight. In 1940, the family was living in a rental at 146 Crescent Avenue, and Sherman was making $4,200 a year from his superintendent position. Their daughter Elizabeth was also employed as a sales lady at a department store and made all of $24 that year. By the time Sherman died of heart disease on September 13, 1947, he was 78 years old, had retired and was living at 2841 Westminster Court. He is buried in Pewee Valley Cemetery.

In 1958, Corey was living at 1361 S.W. 12th Street in Miami, Fla. She died in Dade County, Fla., in December 1968.
The Bloemer Years: Chicken with a Side Order of Chili
​From 1928 until 1940, the house was owned by William A. and Mamie Stone. Mrs. Stone sold it four years after her husband died to Frank B. Bloemer, Jr., and his wife Marie Draheim Bloemer. Frank Bloemer's grandfather, Frank, Sr., had founded the Louisville-based Bloemer Food Sales Company, famed for its chili base, in 1919, and his father, Frank, Jr., had helped the company grow. The Encyclopedia of Louisville (University of Kentucky Press: 2001) tells the Bloemer success story:

​Bloemer's Chili is the signature product of the Bloemer Food Sales Co., Inc, located at 925 S. Seventh St. in Louisville. The company, founded by Frank B. Bloemer, Sr., is a food production and distribution firm. Frank Senior, who started by running a corner grocery store at Second and Jefferson Streets, made a take-home chili base and sold it to customers at the grocery, who would use it to prepare chili at home. The chili was originally made in an iron pot about fourteen inches deep on a gas burner, hand-stirred and poured into one-pound and half-pound oblong tins. After being placed in a refrigerator to harden, it would be taken out and wrapped in parchment paper. Today, the chili base in the original recipe is prepared in a 150-gallon kettle and put into eight-ounce plastic cups for sale in grocery stores.

In 1923, Frank Junior, after graduating from college, started working for the grocery store. In 1926 it moved to Second and Liberty Streets and the Bloemers started packaging chili under the Bloemer's Food Sales name. In 1937 the operation moved to the Seventh St. location. Frank Senior headed the company until he retired in 1941 and Frank Junior took over and served until 1957, when he retired. Frank Junior's brother Lawrence A. "Larry," took over as president and headed the company until 1980, when Larry Junior became president...

Frank Bloemer III (January 3, 1902-October 13, 1976) was in the wholesale and retail grocery business as well, although not involved with Bloemer Food Sales. He was president of a separate company at 914 S. 7th Street called the Frank B. Bloemer Co. and his wife Marie served as secretary/treasurer. When they left St. Matthews and bought the Ashwood Avenue property, they transformed the 3.5 acres into a chicken farm. Ann Montgomery's 1994 publication "35 Landmark Homes of Pewee Valley" notes:

During the time the Bloemers lived in the house the acreage supported as many as 18,000 chickens for their going chicken business. This ended about 1950 (editor's note: it ended in 1946 when they sold the house to the Bruner family), but several of the old concrete outbuildings are still present that were once used in various stages of the chicken processing plant.

One can only imagine how incredibly delighted their artistic next-door neighbor Kate Matthews at Clovercroft must have been with that chicken farm. The noise -- and the smell -- must have been atrocious! 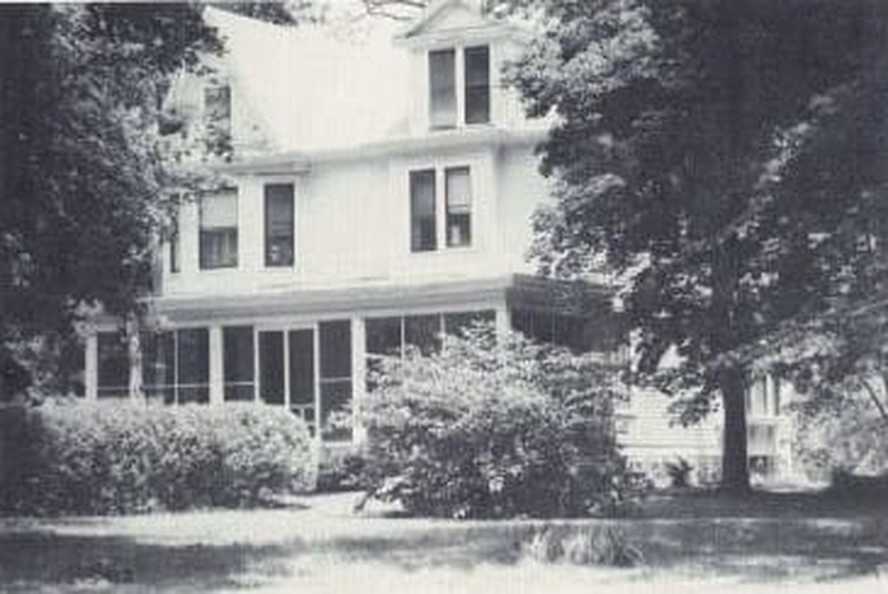 ​...The house had been on the sale market for three years and was then a duplex. (They spent) lots of time, knocking out walls and so forth, restoring the place to a single family dwelling. The house has two stairways, but one had been sealed off for apartment dwellers...

...The interior of the residence has four large rooms on each of the two floors, while the third floor is one huge room that Walter Hayes has now finished...

The story also noted that they turned one of the old outbuildings into a playhouse for their daughter Patti, who was born at the Pewee Valley Hospital and Sanitarium in 1965.
Photos from the 1989 National Register of Historic Places Nomination 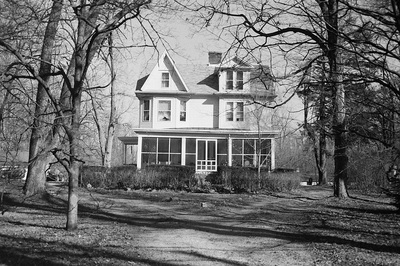 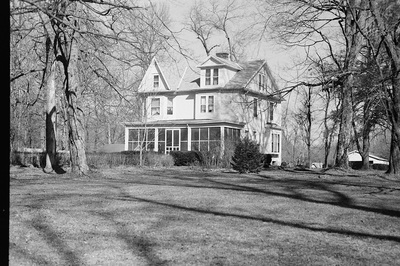