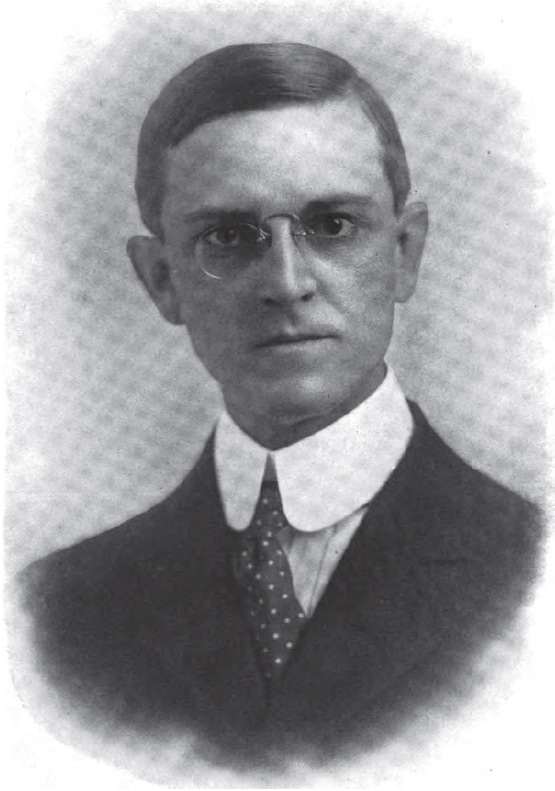 This portrait of Robert Worth Bingham shows what he looked like when he summered at his widowed mother-in-law Henrietta Miller's Pewee Valley estate. He married her daughter, Eleanor Miller, on May 20, 1896 in Louisville. From "A History of Kentucky and Kentuckians" by E. Polk Johnson (1912)
Though Robert Worth Bingham was never a permanent resident-- let along a homeowner -- in Pewee Valley, the powerful publisher of the Courier-Journal and Louisville Times did indeed spend time here between 1896 and 1913, after his marriage to Eleanor Miller. His mother-in-law, Mrs. Henrietta Miller, owned a summer home here known today as the Truman-Miller-Richard House.

Although he served in several high-profile offices in Louisville and Jefferson County during his marriage to Eleanor, Bingham achieved his greatest fame after her tragic death in April 1913. This biographical profile of his life from "A History of Kentucky and Kentuckians: The Leaders and Representative Men in Commerce, Industry and Modern Activities, Volume 2" by E. Polk Johnson (Lewis Publishing, KY; 1912), pp. 773-774, provides a fairly accurate snapshot of his accomplishments during that time period:
Robert W. Bingham.—For the past thirteen years Mr. Bingham has been engaged in the practice of law in the city of Louisville and he holds prestige as one of the able and successful representatives of his profession in this city. He has served as county attorney of Jefferson county and for a short period also was mayor of Louisville. These preferments indicate adequately the high esteem given him in the community.

Robert Worth Bingham was born in Orange county, North Carolina, on the 8th of November, 1871, and is a son of Robert and Delphine (Worth) Bingham, both of whom were likewise natives of the old North state, where the respective families were early founded. The lineage of the Bingham family is traced back to English and Scotch origin, but William Bingham, the original progenitor in America, was born in Ireland, where the family had been established for many years. He came to the new world in 1785 and settled at Wilmington, North Carolina, where he founded, in 1793, the Bingham School, an institution that has since been continued by members of the family until the present day. Mr. William Bingham was a man of fine intellectual attainments, having been graduated in the University of Glasgow, Scotland. The institution of which he was the founder is now located at Asheville, Buncombe county, North Carolina, and the father of the subject of this sketch is now its administrative head, his active career having been one of close and successful identification with educational work. This honored educator is a grandson of William Bingham, founder of the family in North Carolina, and is a son of William J. Bingham, who likewise was long concerned in educational work. Mrs. Delphine (Worth) Bingham was summoned to the life eternal in 1886. She was a daughter of John M. Worth, who was a pioneer cotton manufacturer in North Carolina and he became treasurer of that state in 1877, just after the close of the reconstruction period. He was a brother of Hon. Jonathan Worth, who served as governor of North Carolina.

Robert Worth Bingham was reared to maturity in his native county, where he remained until 1891, when he accompanied his parents on their removal to Asheville, North Carolina. Prior to this removal he had been graduated in the school conducted by his father and in 1890 he was graduated in the University of North Carolina. Thereafter he took a postgraduate course in the University of Virginia, after which he returned to the University of North Carolina, in the law department of which he continued his studies for a time, after which, in 1896, he came to Louisville, Kentucky, and entered the law department of the University of Louisville, in which he was graduated as a member of the class of 1897, with the degree of Bachelor of Laws. (Editor's note: According to other sources, he never graduated from either the University of North Carolina or the University of Virginia.) Later he took a post-graduate course in the law department of the celebrated University of Michigan. He initiated the practice of his profession in Louisville shortly after his graduation in the local university, and his success in his chosen calling has been on a parity with his recognized ability and devotion to his profession. In 1903 he was appointed county attorney of Jefferson county and in the following year he was regularly elected to this position, of which he continued incumbent until June, 1907, when he became mayor of Louisville through appointment by the governor of the state. He served as chief executive of the municipal government until the following November, and since that time he has not appeared as a candidate for public office. On January 11, 1911, he was appointed by the governor Judge of the Jefferson Circuit Court, Chancery branch. Mr. Bingham has served for the past ten years as president of the Kentucky Children's Home Society, and during the greater portion of this period he has also been president of the Board of Children's Guardians of Louisville. His interest in all worthy benevolent and charitable objects is of the most insistent order. He has attained to the Thirty-second degree in the Ancient Accepted Scottish Rite of the Masonic fraternity, besides being prominently identified with the local York Rite bodies of the order, and both he and his wife are communicants of the Protestant Episcopal church, holding membership in the parish of Calvary church.

On the 20th of May, 1896, was solemnized the marriage of Mr. Bingham to Miss Eleanor Miller, who was born and reared in Louisville and who is a daughter of Samuel A. Miller, a well known and highly honored citizen of this state, and a granddaughter of Dennis Long, founder of the firm of Dennis Long and Company. Mr. and Mrs. Bingham have three children: Robert Norwood (Editor's note: His name was Robert Worth Bingham, Jr.), Henrietta Worth and George Barry Bingham.