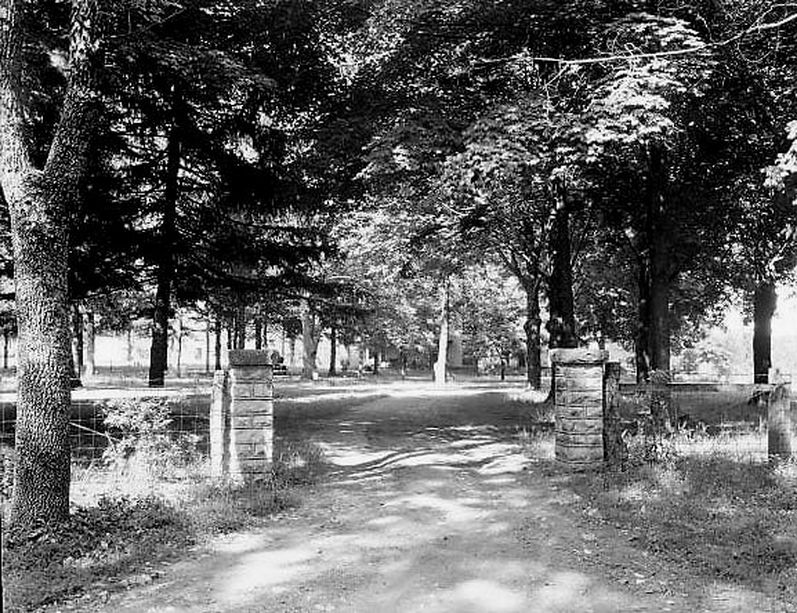 The gate to Green Haven School for developmentally disabled children and adults. From the Caufield & Shook Collection, University of Louisville Photographic Archives, Item CS_102923_n.
Green Haven was a private school for adults and children with developmental disabilities that operated in Pewee Valley from as early as 1926 into the 1950s.

The school was located on 26 acres at what is now 309, 311, 315 and 317 Ash Avenue, and the campus included an old frame farmhouse; a new, two-story brick schoolhouse; and another smaller home that may have been built originally for farm labor or domestic servants.  On the ca. 1939 WPA Plat Map, the property is labeled Tract 2709. 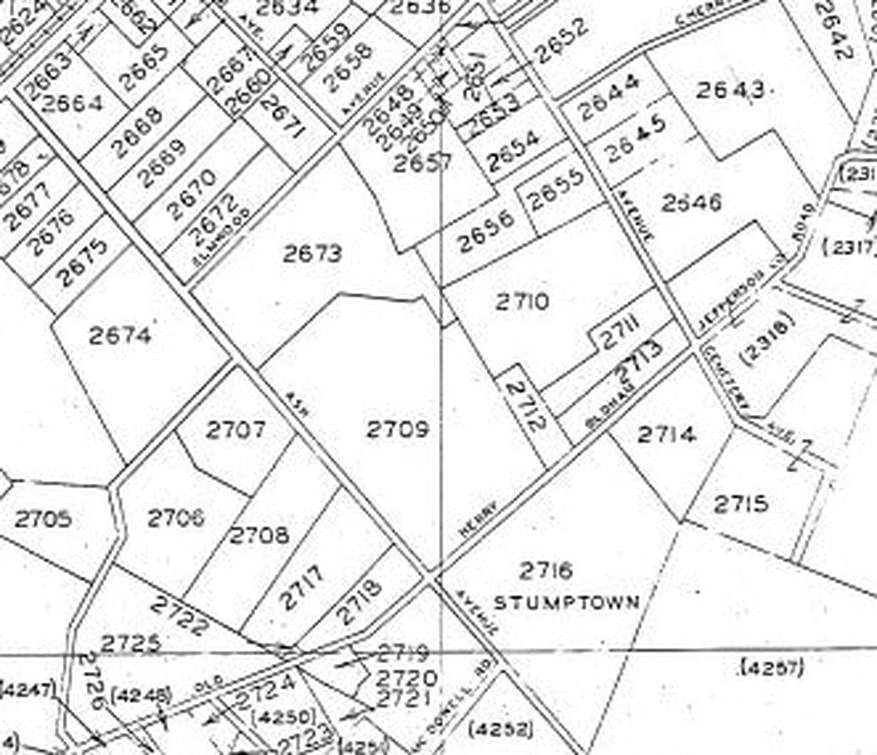 This portion of a plat map of Oldham County completed ca. 1939 by the WPA shows the location of Green Haven School as Tract 2709. Today, that 26+ acre tract has been subdivided into many different home sites, the largest of which is Roundhouse Farm.
The school was owned and operated by Isaac M. Green and his wife, Elizabeth, according to 1930 and 1940 census data. Census takers referred to the operation as a sanitarium for the "humbleminded" or "feebleminded."

In 1930, the Greens had 16 patients and were caring for them without the benefit of any live-in help. By 1940, with both Elizabeth and Isaac in their early 60s, the school employed a live-in teacher and a live-in nurse, as well as a farm laborer and cook. The 26 patients institutionalized there in 1940 included:

​Many of them were from Louisville.
​
​The school was still in existence in the early 1950s, when Pewee Valley's homes and businesses first received street numbers. It appears on the 1953 District Map as a school at 311 Ash Avenue. Census data for 1950 is not yet available.
​ 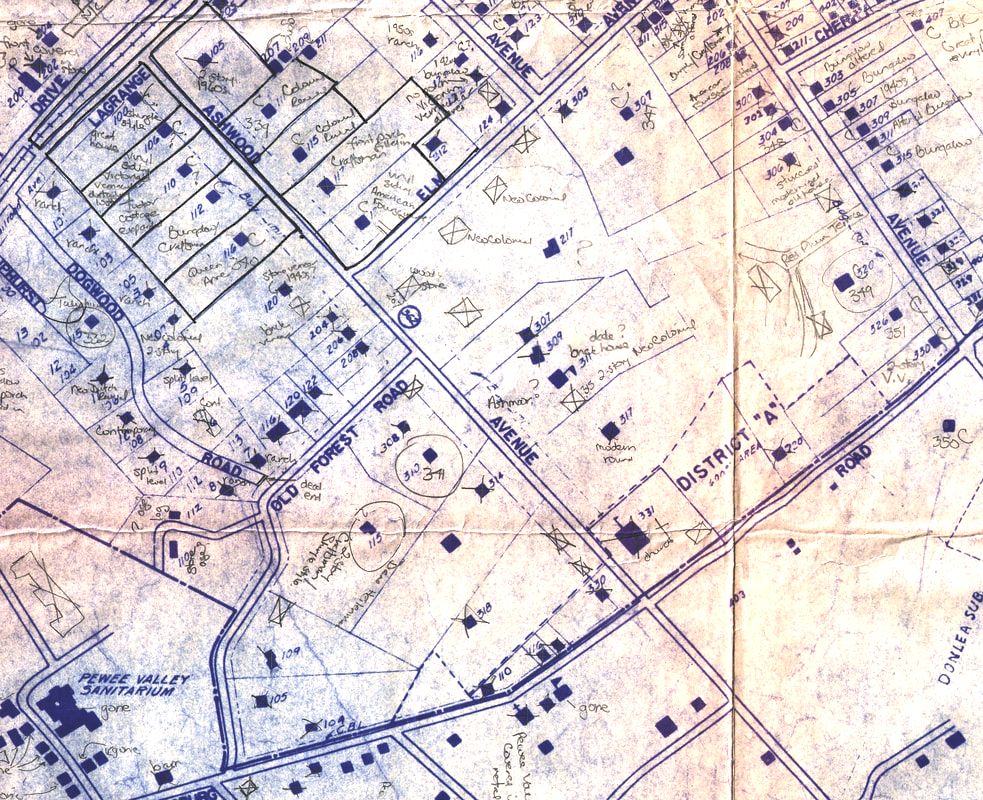 The 1953 District Map shows Green Haven School's location at 311 Ash Avenue. The handmade notations on the map were made by Katie S. Smith for her 1974 history, "Pewee Valley: Land of the Little Colonel." By 1974, the Green Haven property had been divided and the original farmhouse torn down. 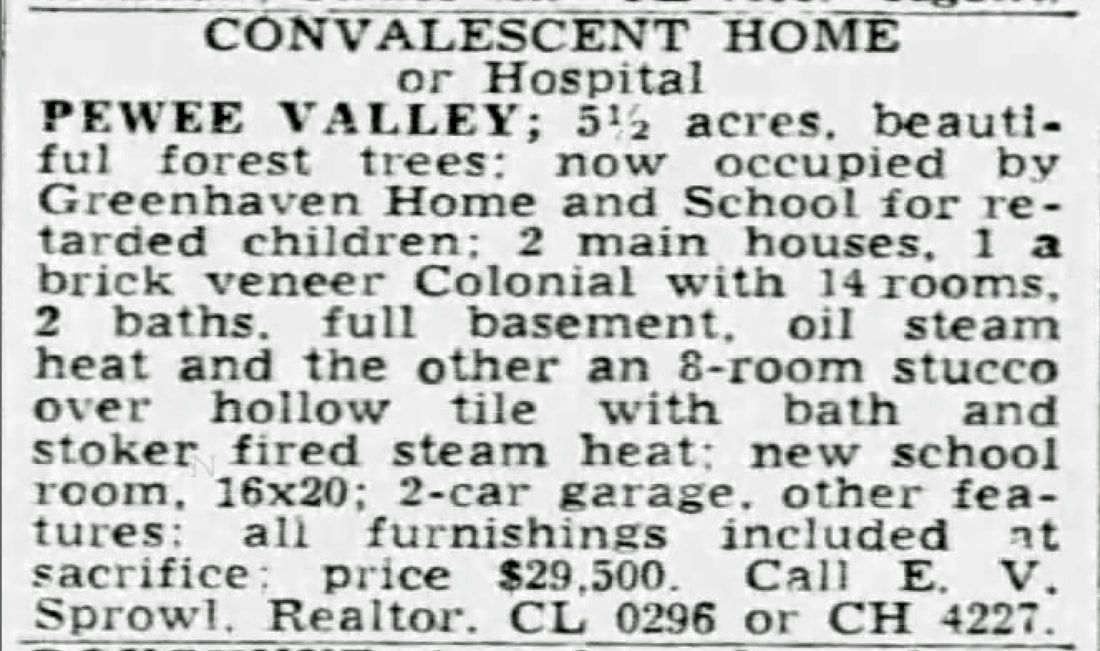 The property went up for sale in 1951.  By that time it was reduced to 5.5  acres, according to this classified ad from the January 14, 1951 Courier-Journal: 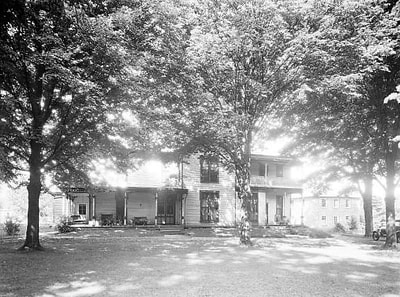 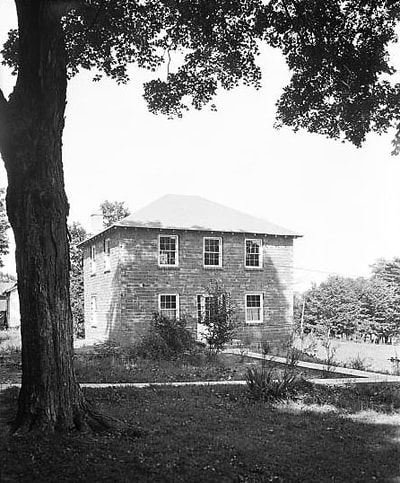 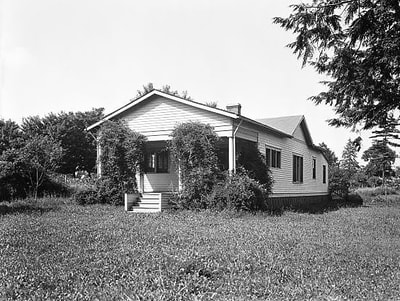 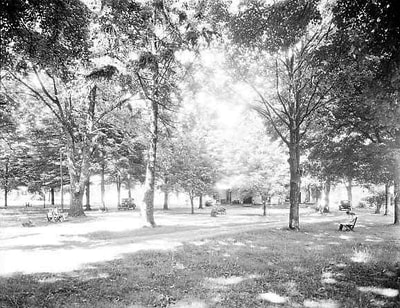 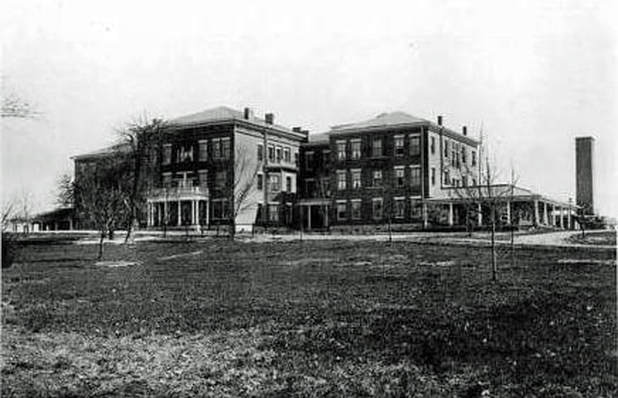 Post card of Kentucky Institution for the Education and Training of Feeble-Minded Children in Frankfort
Elizabeth Scearce Green was the daughter of George  and Mary Taylor Scearce. She was born Catherine Elizabeth Scearce on December 4, 1877, and as a child was nicknamed "Kat." In 1910, she was attending school and living with her family in Lexington, Ky,, where her father ran a retail store.

By 1920, her mother had died and the family had moved to a farm in Bridgeport, Franklin County, Ky. Elizabeth, herself, had finished school and was employed as a secretary at a children's home, most likely the Kentucky Institution for the Education and Training of Feeble-Minded Children in nearby Frankfort.

​That institution had originally opened in 1860, when Governor Magoffin signed a bill to create a state-supported facility specifically to educate and train kids with developmental disabilities. The long-term goal was to make them able to contribute to their own upkeep, and the facility offered training in such skills as carpentry, shoe making and sewing. Those requiring long-term custodial care were returned to their home counties.

By the time Elizabeth Scearce was employed at the facility, it was overcrowded -- almost 400 children were enrolled in the school -- and conditions were far from ideal. Elizabeth was a quick study. She recognized there was a market for private institutions for developmentally-challenged children and adults -- those whose families had the means to pay for their care. On September 3, 1922, she ran a classified in the Courier-Journal, advertising a special private school "to develop boys who require more attention than they can receive in large classes."

La Grange, Ky., Jan. 13 -- With his skull crushed and blood clotted on his face, collar and coat, the body of George S. Scearce, 81 years old, was found shortly after noon today by G.B. Cranfill, a neighbor, who went to pay a business call to Mr. Scearce's 200-acre farm, a mile north of Buckner, a small town four miles east of here.

Mr. Cranfill, who found the body upright in a chair in the living-room of the house, immediately notified Coroner T.G. Connell. After an investigation, Dr. Connell reported he felt certain tonight that Mr. Scearce had been slain Sunday morning.

The dead man's Bible and Sunday-school book lay on a table at his side. He was clad, save for his coat, in his neatest suit of clothes. One shoe was on and the other lay beside the other foot, leading the coroner to believe Mr. Scearce was slain as he was leaning over to put on the second shoe.

No Clews Found
Dr. Connell said tonight he found no loose dirt in any part of the house that might have fallen from an intruder's shoe. He found no weapons. He found no blood stains. He did not even find a fingerprint. So far as he could determine, no lock in the house had been disturbed, the Coroner said.

Robbery as a motive for the crime was discarded by Dr. Connell and Sheriff Ollie Latimer when the dead man's watch was found in his pocket and $4.16 in another. There was no sign of disorder in the room where the body was found, Dr. Connell reported.

The murderer, Dr. Connell believes, opened a screen door, pushed open the front door, which was unlatched, and crept up behind his victim. The back of the chair in which Mr. Scearce was seated was to the door and six paces from it. He heard no noise, the coroner believes. Four blows, any one of which would have been fatal, were struck. Two bashed in the top of his skull, while two others inflicted gashes on each side of his head.

Three paces in front of the victim, in a corner of the room, stood a double-barreled shotgun. Both barrels were loaded and the weapon was in perfect condition for use...

... Mr. Scearce, a native of Shelby County, enlisted in the Union Army and served throughout the War Between the States. He taught school for several years and served in the Internal Revenue Department. A man of means, he purchased the Oldham County farm many years ago. For five years, he has spent considerable time on it, sometimes alone and sometimes overseeing the work of a tenant farmer.

Between his visits to the farm, Mr. Scearce visited his children in Louisville or Pewee Valley. He spent the Christmas and New Year's holidays with a daughter, Mrs. Isaac Green, Pewee Valley, returning to the farm around January 3 ...

Several months went by before Scearce's killer was apprehended. On March 24, 1927, 24-year-old Walter W. Smith, who lived on a neighboring farm in LaGrange, was arrested and charged with the murder. Poet Robert Frost was right. Good fences do make good neighbors. As do locked doors.​
Classified Ads for Green Haven School 1939-1940

Exactly where Elizabeth and her husband were living in Pewee Valley in 1926 is unknown. Any inheritance she received as a result of her father's murder may have helped pay for the land and construction costs for the school on Ash Avenue. We do know for certain that Green Haven School was operating on Ash Avenue in 1929, when Caufield and Shook was hired to photograph the campus.

Also unknown is the date she married Isaac M. Green. Both were single and in their early 40s  when the 1920 census was taken.  Their marriage had to have taken place between late 1920 and 1926.

Though Peweeans were under the impression "Ike" was a doctor and referred to him as "Doctor Green," he was not. Born in Owen County, Ky. on December 25, 1878, he'd owned and operated a general store on the Stamping Ground Pike in Switzer, Franklin  County, Ky., since 1910. Though he probably had plenty of experience dispensing homespun advice to his store's clientele, he  had no experience whatsoever with caring for the mentally handicapped. Green Haven was definitely Elizabeth's brainchild.

Meanwhile, conditions at the Elizabeth's former employer, the state-run facility in Frankfort, continued to deteriorate. By the 1930s, the census had almost doubled, exploding to 740. Though the institute was renamed the Kentucky Training Home in 1945, the severely-overcrowded facility was only able to provide custodial care. With its pastoral setting, modern classroom building, and small census, Green Haven School offered a much more attractive and home-like alternative to families that could afford it.

In 1948, Elizabeth was diagnosed with colon cancer, and she made out her last will and testament on January 9 of that year.  Thanks to Oldham County Clerk Julie K. Barr for providing the Pewee Valley Historical Society with a copy:
​
I, Elizabeth Green, of Oldham County, Kentucky, being of full age, of sound mind and disposing memory, do make, publish and declare this to be my last will and testament, hereby revoking all will and codicils by me heretofore made. In The Name of God Amen.
​

Elizabeth died six months later on June 9, 1948. Her obituary ran in the  next day's Courier-Journal:


Though her husband continued to operate Green Haven for a few years after her death, he eventually closed it down and went back to his roots in Franklin County. He died at age 83 on January 5, 1962 on a Frankfort, Ky., farm he'd been living on for two years. He, too, is buried in Frankfort Cemetery.
​
Long-time Pewee Valley resident Suzanne Schimpeler has pleasant memories of "Doctor" Green:

When I was a child,  Dr Green, a psychiatrist, lived there and had his patients living in housing on site.  He was a very nice man and kept his patients on the premises.  For some reason my parents knew him and liked him.

Dad brought a four-door Mercedes from him.  It was a very nice car.  When I went to Emory University,  it became my car.  I loved it as you can well imagine.