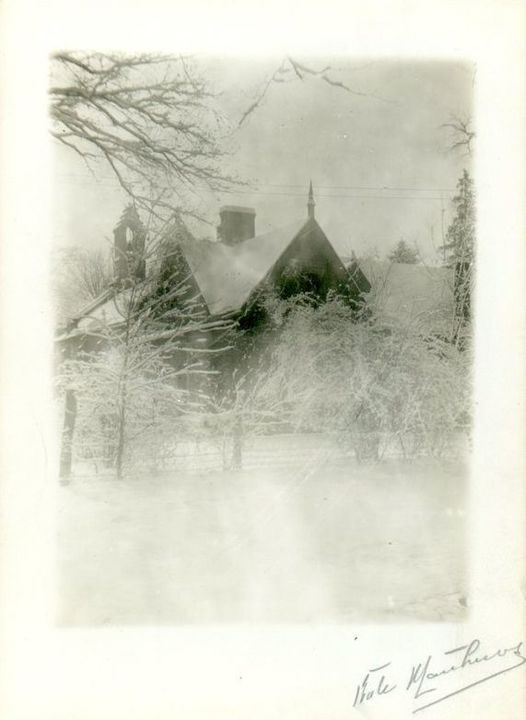 She wrote some "Pewee Valley Memories" for the Presbyterian church's cookbook, "We Give Thanks." And she wrote a story about "The Little Train of Long Ago," describing the trains that punctuated daily life in Pewee Valley, for the Courier-Journal's
January 16, 1968 Sunday Magazine.

This description of Christmastime in her hometown was originally written for the Louisville Woman's Club Bulletin. It was reprinted in the Courier-Journal on December 18, 1966, and is largely based on members of the congregation and Christmas tradition at Pewee Valley Presbyterian Church:

The smell of hard candies brings back nostalgic memories of Christmas in Pewee Valley. Our first party was held at Clover Croft (sic), the home of Misses Kate and Florence Matthews, about a week before Christmas.

We filled a hundred Christmas boxes with hard candies for the Sunday School children to be given out after their Christmas pageant...

... Each year we had to re-learn the knack of filling the boxes; even so, there were many spills before we caught on. Of course we always filled the first boxes too full and so had to go back and empty some before we had enough to finish.

Sometime during the next few days we would go into the woods to get our Christmas tree. If you have never gone out and selected your tree in the woods, you have missed one of the wonders of Christmas.

The woods are so very still as you trudge through the snow. And each tree seems to beckon to you as you approach it, then you see another one you think is prettier, and thus you go on until you find just the right one.​

A field leading to the woods near the St. James Episcopal Church. Photo by Kate Matthews, from "Pewee Valley: Land of the Little Colonel" published by Katie S. Smith in 1974.
While your Christmas spirit is building up within you over your beautiful tree, into this cathedral of evergreens, over the air, come carols played at 12 o'clock on the chimes of a nearby church. This lifts you nearer to heaven and holds you in the spell of the real Christmas.

Preparation and the making of gifts often started in the spring in Pewee Valley; a row of sunflower seed was planted across the garden and bulbs were marked to be divided, and in summer seeds were saved from annual flowers.

In the fall the sunflower seeds were gathered and put in red tartan bags, tied with ribbon and evergreen for friends who feed the birds.

And for those who had a garden, the seeds from the annuals were put in jars decorated with flowers cut from seed catalogs and given for Christmas.

Suet was saved and melted with wild seeds gathered from weeds, and stockings were made from hardware cloth and filled with the mixture to hang on the outside trees for the birds' Christmas.
​ 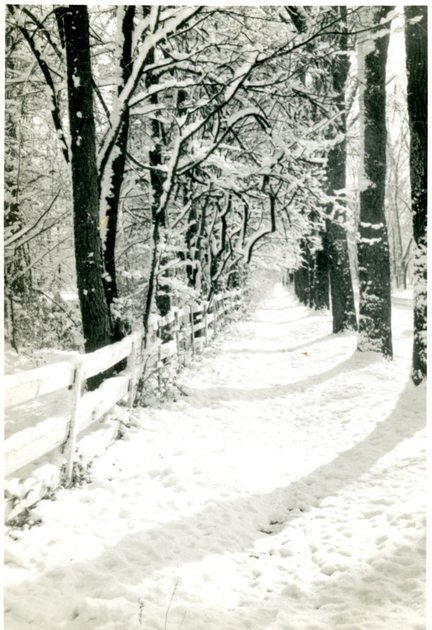 Kate Matthews photo of Ash Avenue in the snow. From "Pewee Valley: Land of the Little Colonel" published in 1974 by Katie S. Smith
Miss Kate knew just where the cedars were that had beautiful blue berries, and her gift would be a basket filled with cedar branches of blue berries and tied with a red ribbon.

Cleverness and work brought forth many unique and interesting wrappings; a black lamb made out of an old Astrakhan muff held in its tummy many small precious gifts.

A grind organ made out of a box painted with Italian scenes with a toy monkey sitting on it, the box fastened to a broomstick, was filled with gifts for all the family.

Newspapers rolled into small logs soaked in a salt solution, and when dry covered with Christmas paper and tied with a red string, made many a Christmas day fire sparkle with colored flame.

One very elaborate preparation was Mrs. Mark Osborn dressed as a Wise Man in a beautiful long embroidered cape with a matching head-dress, and leading a camel, with Charlie and sister, Lilian Fletcher, as the head and back of the camel. The trappings on the camel held gifts.

There was a knock on the door and the Wise Man silently laid the gifts at your feet and silently moved away. Another was a dog sled made of a box, and a child's sled drawn by the owner's big collie dogs.​ 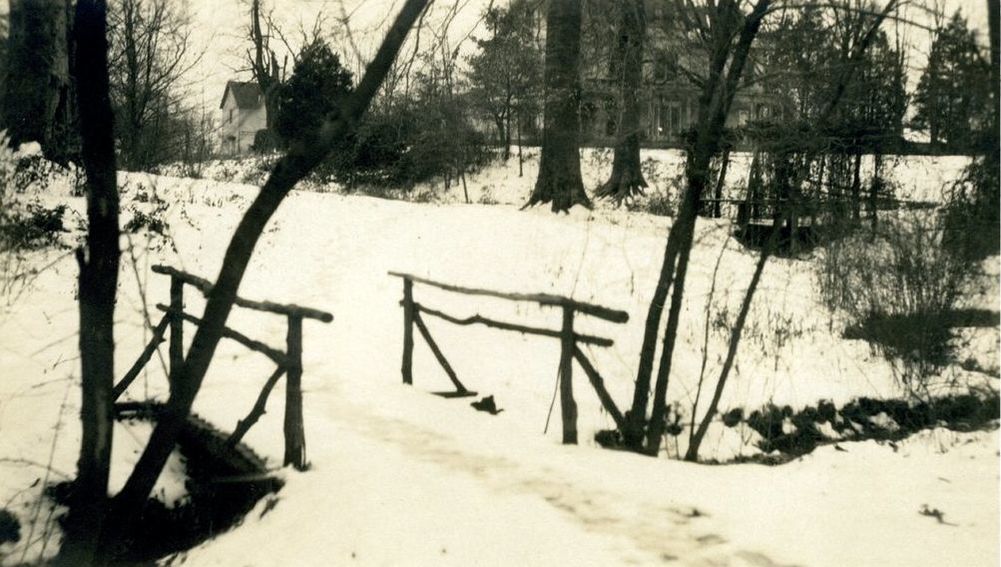 Little Bridge and Woodside, home of Frank Gatchel, in the snow. Courtesy of Ed Shadburne.
After the gifts were bedded down beneath the tree to await the dawn of Christmas day, all Peweezers who had time gathered at Mr. Frank Gatchel's to have him read Dickens' "Christmas Carol."  This was a traditional custom that Mr. Gatchel handed down to each group of young people of the Valley.

He would have a big roaring fire in his library and we would sit on the floor and listen. As the fire burned down and the story came to an end, we would pop corn and roast apples. 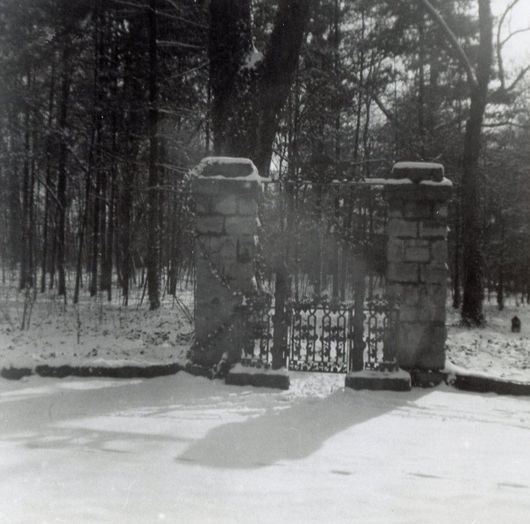 The gate to Twigmore, home of Lillian Fletcher. From the Ross Family Collection, courtesy Bethany Major.
From there we would go to Lillian Fletcher's for her party before the midnight service at the church. Her English house lighted with a candle in every window gave us a big welcome, and once inside we were ushered into story book land.

Each window sill had animal cookies, nuts and raisins in among the evergreen branches, carrying out a tradition from a story.

Her table loaded with Christmas goodies too pretty to disturb, was breathtaking. We ate until we could hardly talk, much less sing, when we heard the church bell ring out, calling us to our midnight service.

As each person got into his choir robe to join the processional he was not sure of the notes that would come out, after all that food.

​The end of the service was the children's nativity scene. The seriousness with which each child tried to do his part kept one from being amused at the borrowed walking canes used for shepherds' crooks and recognized draperies made into king's robes and someone's sewing box and cologne bottles coming as gold, frankincense and myrrh.

As the last child, dressed in rags, lisped out, "What can I give Him, poor as I am?  I know I can give Him my heart," the church chimes announced the beginning of another Christmas Day.

As we went our various ways home through the snow the stars would seem so big and near that we were filled with the awe and wonder of the First Christmas. 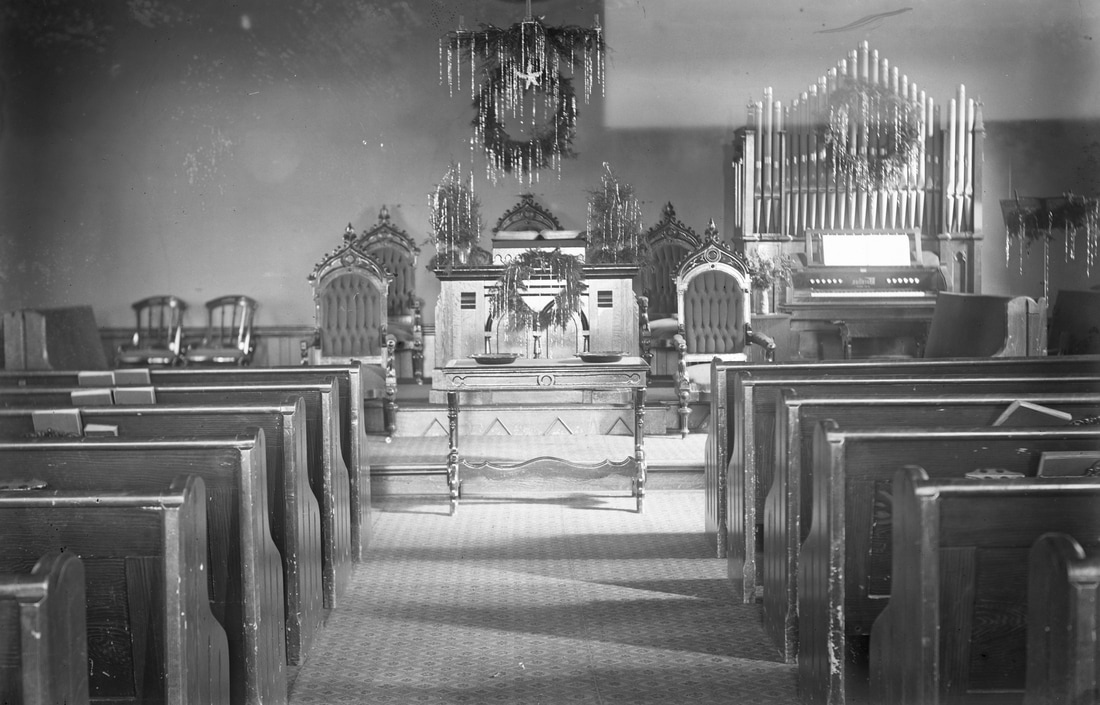 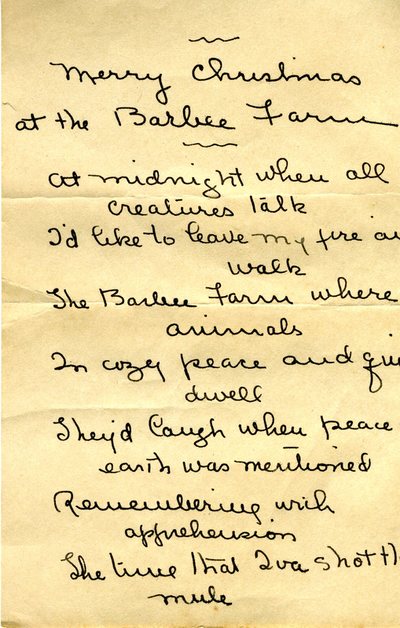 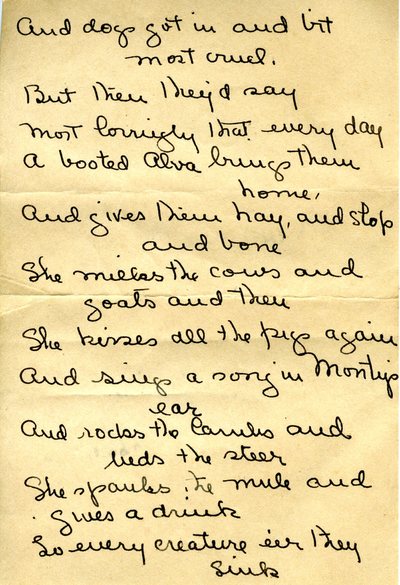 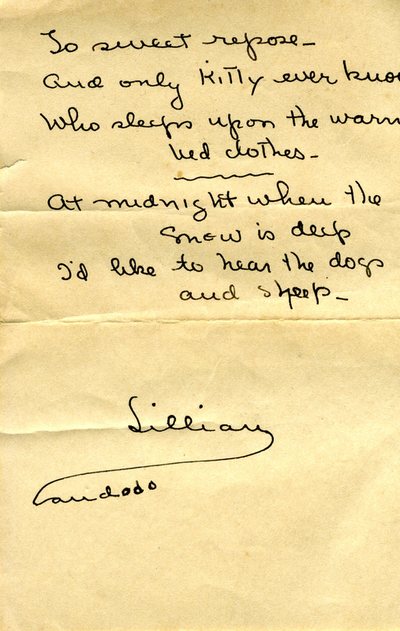 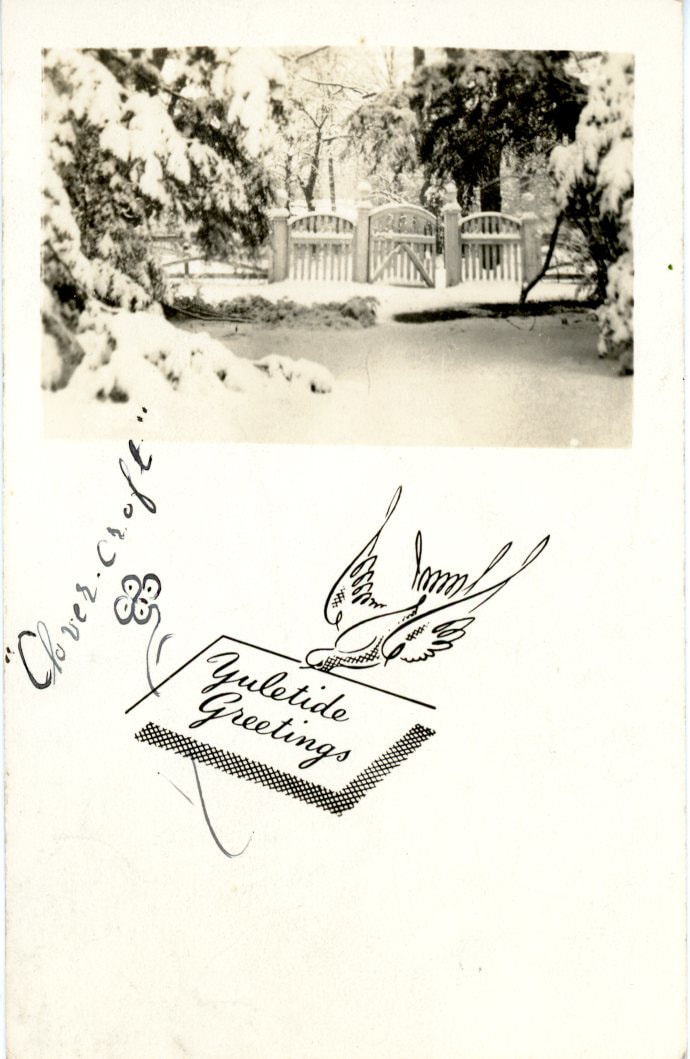