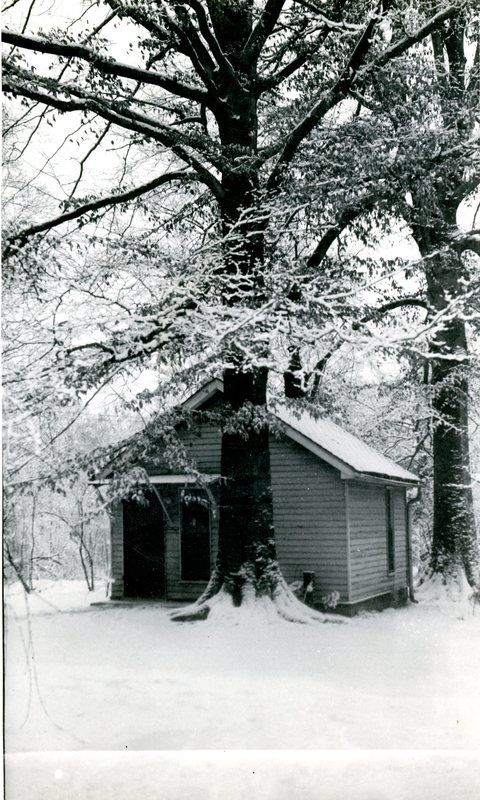 Original school house behind the St. James Episcopal Church before it was moved to Tulip Avenue

Photos from a January 27, 1909 Courier-Journal story called, "What Can Be Done in Improving a School Building"
Who was Amelia Crawford?
The youngest son, Thomas Howell Crawford, became a prominent citizen of Louisville and served as its mayor in 1859-60. Thereafter he was an administrator of estates for the County Court. In June 1871, at the age of 68, he was killed in an explosion in his home in Pewee Valley, Kentucky. It was his spinster daughter, Miss Amelia Crawford of Covington, Kentucky, who aided Dr. Schachner in his search for details concerning the history of the Crawford family.

Calverts came to Pewee Valley on or before 1880 -- they are on the 1880 census for Rollington. Clara Calvert was the oldest, at 17

CALVERT, &c. v. TOWN OF PEWEE VALLEY.
(Filed February 1, 1894—Not to be reported.)
1. Conveyance of lot for school purpose construed—A lot was conveyed to certain grantees "for sohool purposes and such other uses consistent with lt,s use for school purposes as a majority In interest of the owners may determine," with the further proviso that its use for school purposes was not to he abandoned "except by the written consent of those who may own at least ten-thirteenths of said land," and when such consent was obtained the lot might "be oonverted to other uses or sold by the owners for any purpose whatever." Appellee, the owner of two-thirteenths of the lot, and a corporation duly authorized to create and maintain a graded school, claims the right to erect a schoolhouse on the lot, while appellants, the owners of seven-thirteenths of It. assert a right to its possession. Held--
The right to use the lot for school purposes is not lost or abandoned until the owners of ten-thirteenths shares of it so agree in writing, and the owners of a majority in interest of the shares have no right to and can not prevent Its use for such purposes, although they may determine to use it for other purposes consistent with school purposes, and, therefore, appellee has a right to erect a schoolhouse thereon without the consent of appellant, who is not entitled to possession of the lot.

9. Same—Pleadings—To a motion by appellee to enjoin appellants from interfering with the erection of the schoolhouse on the lot an answer alleging the appellee had abandoned its purpose to erect the schoolhouse and had no right to prosecute the action, because the same had been compromised and settled, and that the owner of a majority of the shares of the lot bad not consented to the erection of the schoolhouse. and that appellee had one schoolhouse and did not need another, was insufficient, and a judgment for appellee as prayed for was proper
Morris & Ladd for appellants.
M. W. Muir for appellee.
Appeal from Oldham Circuit Court.
Opinion of the court by Judge Hazelrigg.
In 1873 Amelia M. Crawford, in consideration of the sum of $503.90, sold and conveyed to the appellee and others some two acres of land to be used "for school purposes, and such other purposes consistent with its use for school purposes as majority in interest of the owners may determine."
Its use for school purposes was not to be abandoned "except by the written consent of those who may own at least ten-thirteeiiths of said land," and when such consent was obtained, then the property might "be converted toother uses, or be sold by the owners for any purpose whatever."
To what use, if any, the property was put for some years after this conveyance does not appear/but in 1890 the appellee, the owner of two-thirteenths of it, and the representative of a majority of the owners, acting under a resolution of the board of trustees of the town, began the erection of a schoolhouse thereon. The corporate limits of the town constituted a common school district, and by its charter the appellee was authorized to maintain a common school for the district.
It appears that by purchase from the original grantees the appellant, Clara Calvert, became the owner of seven-thirteenths of this lot, and when the work of erecting the building began she and her father, her co-appellant, interfered with the workmen and in effect drove them off the premises. Thereupon this action was brought by the appellee, seeking to restrain the appellants from such interference and asking that the right to the use of the lot in question for school purposes be adjudged in it under the deed from Crawford. The defendants to the action, the appellants, not appealing, the cause was submitted and judgment rendered perpetuating the injunction and adjudging the plaintiff, the appellee, to be the rightful owner of the property for school purposes, and that the appellants have no interest in it.
On the second day after the judgment, and during the same term, the appellants appeared and moved to set aside ihe order of submission and file their answer. The court refusing to do so. they have appealed to this court, complaining of the order overruling their motion and of the judgment as well.
The only question we need notice is as to the sufficiency of the proposed answer. It is to the effect, first, that after the institution of the action appellee, by its board of trustees, abandoned its purpose of ereoting the schoolhouse, and directed the partlyconstructed building to be torn down; second, that the appellee has no right to prosecute the suit because the claims set up therein have been compromised and withdrawn; that the action was to be dismissed under the agreement, and the suit is now being carried on in violation of the agreement; third, that a majority of the owners have not consented to or directed thf erection of the proposed building; that the district already had or olaimed to have a suitable schoolhouse, and also had one under lease' and did not need another; that a heavy tax would be required to complete the work, etc.; fourth, that the appellants claim Calvert was the owner of seven-thirteenths of the lot In question, and was entitled to the possession of it.

It does not seem to us that the matters set up by the appellants offer any obstruction to the use of the property as provided for in the conveyance by Crawford.
The ownership of the appellant, Clara, is subject to the uses named in the deed, and that the appellee is proceeding in good faith to use the lot as it was intended to be used is apparent from the record. The interference of the appellant, J. W. Calvert, was unwarranted, and the proceedings against him for contempt seem to indicate that he is trying to divert the use of the lot from its intended service.
While chairman of the board, a position he seems to have attained after the institution of this suit, the appellant, J. W. Calvert, appears to have induced the board to take steps looking to. the dismissal of the suit and the abandonment of the work.
He was soon "deposed," however, and his project failed. In the method of his retirement from the chairmanship he claims to have been the victim of a conspiracy, and that his successor Unlawfully seized the office. Be all this as it may, thesegrievances afford him no right to interfere with the designated use of the property under the deed of Crawford.
The recitation in the judgment, that the appellants have no interest in the property, must be taken to mean no interest in conflict with the uses indicated in the deed. Before its use for school purposes could be abandoned the holders of ten out of thirteen shares must so agree, and while a majority in interest of the owners may determine such other uses of the property as may be consistent with its use for school purposes, the holder or holders of any number of shares less than ten of the thirteen can not frustrate" its principal use as fixed by the express terms of the conveyance under which it is held.
Judgment affirmed.
Biennial Report of the Superintendent of Public Instruction of Kentucky: With Accompanying Documents for the Two Years Beginning July 1 ... and Ending June 30 ... Frankfort, KY The Kentucky State Journal Company, 1911  Ellsworth Regenstein, Superintendent of Public Instruction
Kentucky. Dept. of Education
Department of Public Instruction, 1911

The teacher of the Pewee Valley school organized a School Improvement League, beginning with only four members, women. In a short time the membership increased and many men became interested and joined. Finally, the men in the League made a "house to house canvass" for a school tax and got it. The net results of 11 months work by the League were 4 acres of school ground bought instead of the one acre of leased ground, 2 handsome school rooms and splendid equipment, instead of the old and shabby one room school house with practically no equipment. a nine monthsschool term instead of 6 months, an increase of salary for the teacher and the appointment of a capable assistant. a handsome sectional bookcase with about 200 volumes, the introduction of some elementary agriculture, domestic science and manual training and last but not least, a capable janitor who keeps the school as if it were an adjunct of "Spotless Town.9'