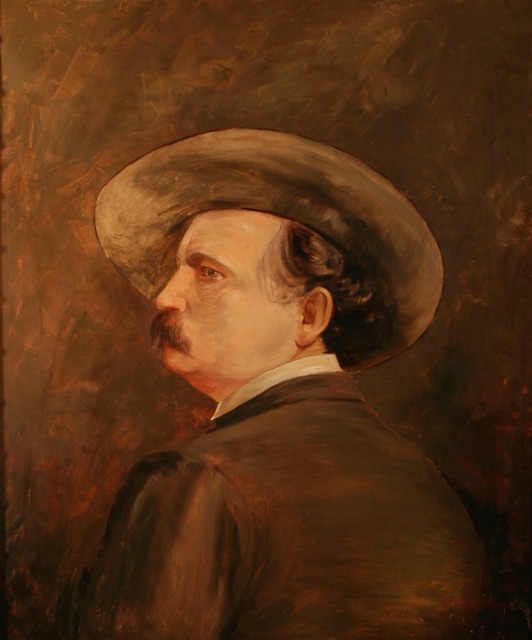 Early life[edit]Brenner was born in Lauterecken in the Kingdom of Bavaria (now in the Kusel district in Rhineland-Palatinate) to Frederick Brenner. Brenner attended public school from age 6 to 14, where his artistic talent was recognized by his teacher, who requested permission from King Ludwig I for Brenner to be admitted to the Academy of Fine Arts in Munich. Brenner's father refused consent and trained his son as a glazier.
In 1853, Brenner emigrated with his family to the United States where they first lived in New Orleans. The family moved to Louisville, Kentucky in the winter of 1853-54. There, Brenner found work as a glazier, house painter, and sign painter.
Art career and style[edit]In 1863, Brenner was commissioned by Louisville Masons to paint panoramic Civil War battle scenes inside their lodge. By 1867, Brenner had a studio located at 103 West Jefferson Street in Louisville. He became a professional painter by 1871, by selling his landscapes of Cherokee Park. In his lifetime, Brenner was considered Kentucky's greatest living artist. He was one of a group of Louisville artists known as "Tonalists", whose muted colors evoked mood.
Brenner's works were exhibited at the Louisville Industrial Exposition in 1873 and at the Pennsylvania Academy of Fine Arts in 1876. One of his most notable paintings is Falls of the Cumberland River, Whitley County, Kentucky, executed 1881-82. Brenner became a member of the National Academy of Design in 1877 and remained active until 1886.
His works are collected throughout the United States, including the Corcoran Gallery of Art in Washington, D.C. and the Speed Art Museum in Louisville.
Personal life and death[edit]Brenner married Anna Glass in 1864; together they had six children, of whom Carl, Jr. (1865-1929) also became an artist. Brenner died in Louisville on July 22, 1888 and is buried there in St. Louis Cemetery.
References[edit]Louisville artist Carl Christian Brenner (1838-1888) is profiled in “Brrr, It’s Cold Outside …” which was posted on February 5, 2013, and can be directly linked at: https://kentuckyonlinearts.wordpress.com/2013/02/05/brrr-its-cold-outside/
Carl’s most iconic paintings are detailed landscapes of his favorite haunts: scenes from what is now Cherokee Park and along River Road in Louisville, Pewee Valley in Oldham County, and the hills just across the river in New Albany, Indiana. His favorite subject was beech trees. Brenner married Anna Glass (1843-1936), daughter of an eminent Louisville violinist, in 1864 and they had six children. Three sons inherited his artistic talent; Edward became an architect and Proctor Knott (named after Carl’s close friend, Kentucky governor James Proctor Knott) studied art before taking holy orders at St. Meinrad Abbey in Indiana. Carolus (1865-1924), who painted this portrait of his father, studied art in Germany and France before settling in Chicago. Several works by Carolus are also in KOAR and the Filson Historical Society has photographs taken by both Carolus and his brother Edward in its special collections. A catalogue of the J.B. Speed Memorial Museum’s 1947 exhibition “Kentucky Paintings by Carl Christian Brenner” can be found at:https://speedweb.speedmuseum.org/pdfs/brenner.pdf

A Biographical Sketch of Carl Brenner
from
The Biographical Encyclopaedia of Kentucky of the Dead and
Living Men of the Nineteenth Century.  Cincinnati, OH. - 1878

"Carl C. Brenner, Landscape Painter, was born August 1, 1838, at Lauterecken, on the Rhine, in Bavaria, where his father Frederick Brenner, lived, a glazier by trade. He attended the public schools of his native village, from his sixth to his fourteenth year; was considered one of the brightest of his class, and showed such decided talent in drawing that his teacher made application to King Ludwig I for his admission to the Academy of Fine Arts, at Munich.  The king was ever ready to assist artistic talent, and readily granted the permission; but here he met with opposition from his father, who, as himself and two other sons were glaziers, desired that Carl also should follow the trade, and refused to allow him to prosecute his art studies.  He therefore worked with his father until 1853, when the family emigrated to America, arriving at New Orleans in the Winter of that year, and went to Louisville, Kentucky.  Here his talent was discovered by Mr. George P. Doorn, proprietor of the "Anzeiger," who noticed some of his excellent pencil sketches of Mississippi scenery, and at once advised him to become a landscape painter.  He therefore made use of his earnings as glazier, and also house and sign painter, to pursue studies for that purpose, and his work since attests the genius that enables him so faithfully to portray nature.  Even when employed on sign painting, his artistic workmanship drew much admiration, and many beautiful samples were on exhibition at the Louisville Exposition, and the International, at Vienna.  His landscapes have always met with ready sale, and are found in many of the prominent art-galleries of the United States.  In social life he is very popular and occupies a high place in the esteem of his countrymen.  He was married, in his twenty-sixth year, to Miss Anna Glass, the accomplished daughter of an eminent musician of Louisville."
TOP


Pewee Valley, the home of Miss Matthews, lies like an artist's dream of a village, in sylvan surroundings of wondrously beautiful and picturesque quality; and this felicitous collaboration of nature her artist-eye has discerned and used with fine results. As a choice bit of selection from woodland and stream the photographicprint, "In Still September" needs no laudation. In the same vicinity of charming natural beauty, is the old home of Kentucky‘sfamouspainter of beeches, Carl Brenner— the artist who evidently believed with Robert Louis Stevenson that “trees are our most civil society." From the humble dwelling of this celebrated painter stretches away a forest of stately beeches, in whose grand forms and varying moods he found his wealth of inspiration. An idyllic and mossy-banked forestbrook babbles and plashes through this woodland until it passes over the ruins of an old mill-dam, near which stands a dismantled and mouldering mill—a picturesque monument to its own industrious past. Up and down all this classic Carl Brenner land Miss Matthews has tramped with her camera, and has gleaned a rarely fine collection of artistic photographs of the